At the debate, President Trump and Joe Biden were actually able to debate. Offstage, both candidates are carrying on distinctly different campaign styles that suit them best. 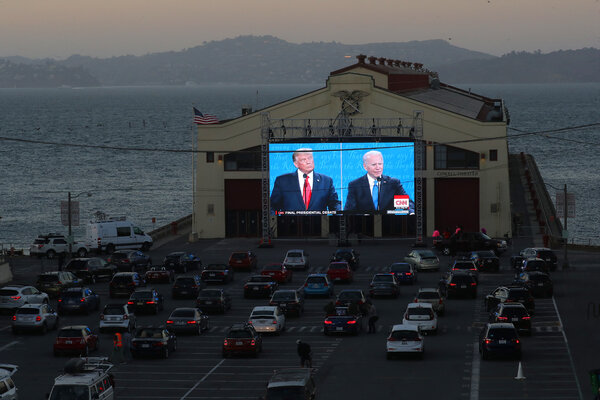 Welcome to our weekly analysis of the state of the 2020 campaign.

The week in numbers

Joe Biden’s lead in national polling averages, including The Upshot’s, tapered ever so slightly this week — dipping just barely below 10 percentage points but seeming to hold steady there.

In national surveys released by both The New York Times/Siena College and Quinnipiac University, Mr. Biden led President Trump by double digits among the oldest voters as well as the youngest, a stark example of how he has scrambled the standard political calculus.

A Times/Siena poll of Montana released on Friday showed Mr. Trump maintaining a six-point lead there, and Senator Steve Daines, a pro-Trump Republican, appearing to hold off his Democratic challenger, Gov. Steve Bullock. Mr. Daines led by three points in the closely watched race, a difference that is within the poll’s margin of error.

The Biden campaign reported far more money in the bank than the Trump campaign as of mid-October: $162 million to $43.6 million. The disparity was $335 million to $223 million when all party funds are included. 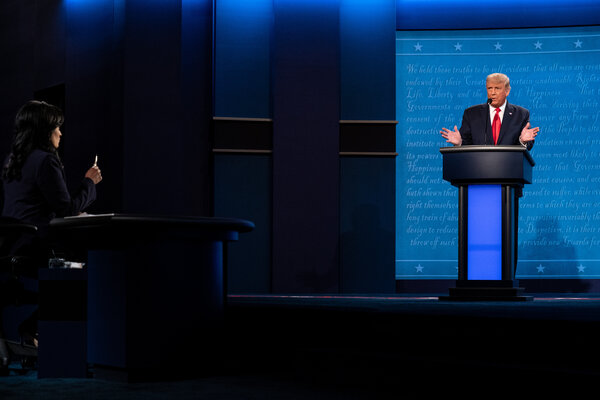 President Trump did what his advisers wanted him to do at the debate on Thursday night, despite his lack of prep sessions: He didn’t interrupt former Vice President Joseph R. Biden Jr., and he toned himself down. But with less than two weeks left in the race, and nearly 50 million votes already cast in the election, the time for a reset that changes the dynamics of a race whose dynamics have not changed much since March is dwindling. The bulk of the conversation on the debate stage was still about the president’s handling of the coronavirus, where he offered little new.

He accepted responsibility for the 220,000 lives lost, while deflecting any blame, all in the same breath. “I take full responsibility, but China brought it here,” he said. “It’s not my fault.” He asserted that “2.2 million people modeled out were expected to die,” a claim he often repeats but for which there is no clear backing. Mr. Trump’s attempts to paint Mr. Biden as both corrupt and a Trojan Horse of the left fell flat (“he thinks he’s running against someone else,” Mr. Biden pushed back at one point). And the issue of law and order that the president wanted to elevate has dwindled in most parts of the country since a summer of protests.