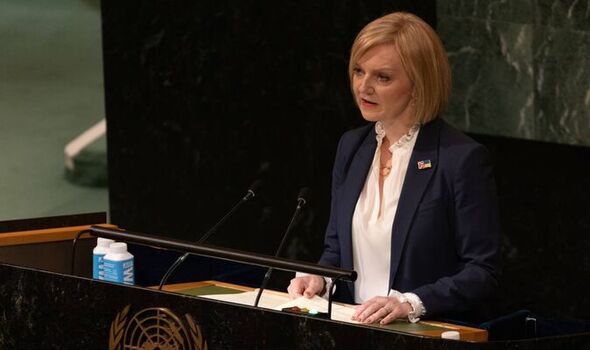 But the PM has made driving up growth the absolute top priority of her government. She told the Daily Express: “We are determined to build the most successful economy in the world.”

“Our Growth Plan will do that – creating jobs and opportunities for people right across our United Kingdom.

“It is a plan that will benefit ordinary working people and change their lives for the better.”

Ms Truss is reviewing the tax system to make it simpler and is expected to announce more reforms in a formal budget within months.

Among changes being looked at are an increase in the threshold workers start paying the 40p higher rate of tax to stop senior teachers, nurses and police being caught up in the band.

The Treasury is also examining reforms to the tax allowances on pension pots after an exodus of doctors from the NHS to avoid being penalised by the system.

Savers are currently hit by a 55 percent tax on funds valued at more than £1 million, effectively forcing them into early retirement.

A charge on parents who earn more than £50,000 and claim child benefit is also being reviewed.

“Currently, we have a 70 year high in our tax rates. And what I’ve determined to do as Prime Minister and what the Chancellor has determined to do is make sure we are incentivising businesses to invest,” she told US channel CNN.

She said the energy price freeze, which will keep the typical family bill to around £2,500 instead of the predicted £6,000, would help hard-pressed families.

“And we’re also as well as dealing with a real short term issue we face this winter next winter, and making sure we invest in the UK energy supply,” she said.

Critics have attacked the government’s tax-cutting zeal and claim the reforms favour the rich.

Chancellor Kwasi Kwarteng denied the suggestion and insisted the government has “focused on tax cuts across the board.”

“That’s why we’ve reversed the national insurance increase – which I think was not a good policy and we’ve reversed that – and also we’re bringing forward the cut in the basic rate and there’s more to come.

“We’ve only been here 19 days. I want to see, over the next year, people retain more of their income because I believe that it’s the British people that are going to drive this economy.”

Conservative MP Marco Longhi dismissed suggestions that Tories are planning to vote against the mini-budget because they are concerned about the debt being used to pay for it.

“I’d be very surprised if that’s the case, he told GB News.

“But what I would say is that whenever we have a sudden shift in what we have become accustomed to, and certainly the Treasury has been operating in a particular way since 2008, then people will automatically try and use a particular set of arguments against what other people might be arguing for. What we’re arguing for now is that more of the same does not work and will not work.”

A review of immigration rules, announced as part of last Friday’s mini-budget, is due within weeks.

It will look at ways to support growth while maintaining control of migration.

Brexiteers in the Cabinet are said to be concerned about the plans, including Business Secretary Jacob Rees-Mogg.

He has demanded evidence that the reforms will lead to an increase in GDP.

The shortage occupation list will be updated to help fill the gaps in areas with high vacancy rates, such as agriculture, social care and haulage.

A government source said: “We need to put measures in place so that we have the right skills that the economy, including the rural economy, needs to stimulate growth.”

“That will involve increasing numbers in some areas and decreasing in others.”

“As the Prime Minister has made clear, we also want to see people who are economically inactive get back into work.”

Businesses have been frustrated that the visa system for skilled work has not been responsive enough to shortages they have experienced.

During her campaign for the Tory leadership, Ms Truss promised to tackle the labour shortages in farming – partly caused by post-Brexit freedom of movement restrictions and accentuated by the pandemic – with a short-term expansion to the seasonal workers scheme.

A recent Government report warned that such shortages were badly affecting the food and farming sector, often forcing farmers to cull healthy pigs and leave fruit rotting in the fields.

The seasonal workers programme, first launched in 2019, temporarily allows 40,000 overseas workers into the UK for seasonal roles in the horticulture and poultry sectors.

The cap is expected to be lifted and the six-month time limit extended.