The Biden administration, under pressure to help with a surge raging out of control, will also supply therapeutics, test kits, ventilators and protective gear. 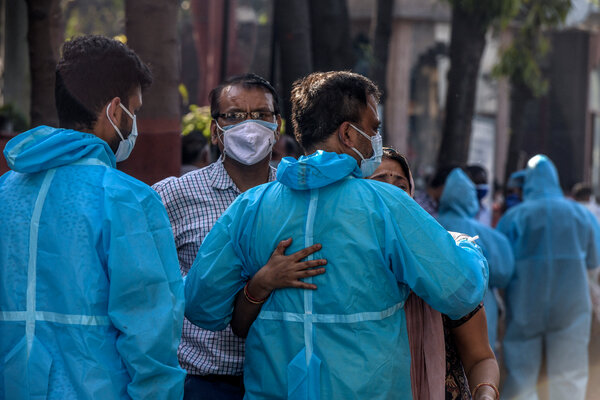 WASHINGTON — The Biden administration, under increasing pressure to address a devastating surge of the coronavirus in India, said on Sunday that it had partially lifted a ban on the export of raw materials for vaccines and would also supply India with therapeutics, rapid diagnostic test kits, ventilators and personal protective gear.

“Just as India sent assistance to the United States as our hospitals were strained early in the pandemic, the United States is determined to help India in its time of need,” Emily Horne, a spokeswoman for the National Security Council, said in a statement on Sunday.

The announcement, an abrupt shift for the administration, came after Jake Sullivan, President Biden’s national security adviser, held a call earlier in the day with Ajit Doval, his counterpart in India, and as the Indian government reported more than 349,000 new infections, a world record for a single day. Ms. Horne said the United States had “identified sources of specific raw material urgently required for Indian manufacture of the Covishield vaccine,” the Indian-produced version of the AstraZeneca vaccine.

The situation in India is dire. The country is witnessing perhaps the worst crisis any nation has suffered since the pandemic began, with hospitals overflowing and desperate people dying in line waiting to see doctors — and mounting evidence that the actual death toll is far higher than officially reported. Officials say they are running desperately low on supplies, including oxygen and protective gear, as a deadly new variant is thought to be behind a rise in cases.

Many Indians are frustrated that their country, the world’s largest producer of vaccines, is so behind in its own inoculation campaign. Fewer than 10 percent of Indians have received even one dose, and just 1.6 percent are fully vaccinated, according to a New York Times database — even though India is producing two vaccines on its own soil.

Yet even as horrifying images of strained hospitals and orange flames from mass cremation sites circulated around the world last week, administration officials had pushed back as pressure mounted for the United States to broaden its effort to combat the surge in India. For Mr. Biden, the crisis in India amounts to a clash of competing forces. The president came into office vowing to restore America’s place as a leader in global health, and he has repeatedly said the pandemic does not stop at the nation’s borders.

Tags: Coronavirus;COVID-19, India, Vac
You may also like
Recent News: