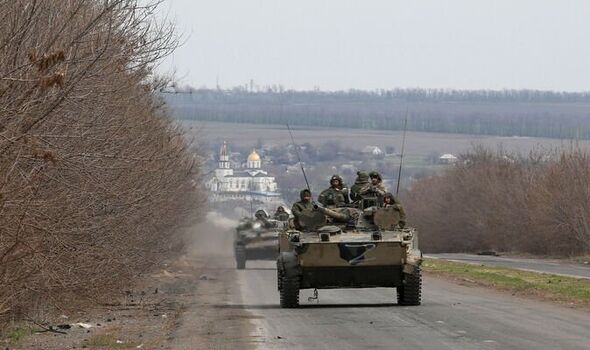 Ministers said the UK was determined to do ­everything possible to hold generals and troops to account for the “truly awful crimes” they have committed against civilians. It comes after Boris Johnson saw first-hand the impact of Moscow’s murderous onslaught. Details of how he made the trip to Kyiv emerged yesterday in a video of him on a train. The Prime Minister told rail staff: “We in the UK stand in sympathy and solidarity with you.”

Mr Johnson is the first G7 leader to meet Volodymyr Zelensky in person since war began.

In an address to his nation, the Ukrainian ­president said: “The leadership of the United Kingdom, in providing the necessary assistance in terms of defence, as well as leadership in
sanctions policy, will go down in history forever.”

Policing Minister Kit Malthouse said it was vital that evidence of war crimes was gathered as “assiduously as possible” to help prosecutions at the international court in The Hague.

But he added: “While that is ongoing we can take action… sanctions put on ­individuals, including ­combatants, ­leading ­generals and others involved.”

Igor Zhovkva, the president’s chief ­diplomatic adviser, said Mr Johnson’s visit to Ukraine was “very important” and he “did not come empty-handed”. He said the leaders talked about military and ­financial support plus “rebuilding Ukraine when we will win”.

Britain’s Ministry of Defence said retreating troops left evidence of the “disproportionate targeting of non-combatants” as they pulled back from around Kyiv, including “mass graves and the fatal use of hostages as human shields”.

So far, according to Iryna Venediktova, Ukraine’s Prosecutor General, Kyiv authorities have discovered as many as 500 war crime suspects and 5,600 alleged war crimes.

Sir Geoffrey Nice QC, who led the prosecution of Slobodan Milosevic at the International Criminal Tribunal for the former Yugoslavia, said Russia must be axed from the UN Security Council or lose its veto so it can stand trial for a crime of aggression.

He said: “It is the equivalent of Hitler being given the veto power in 1944, to say who will be tried at Nuremberg in 1946.”