WASHINGTON (Reuters) – Former White House aide Alexander Vindman, a key figure in the impeachment of President Donald Trump, said on Wednesday he was retiring from the Army after what his attorney described as a “campaign of bullying, intimidation and retaliation” by the president. 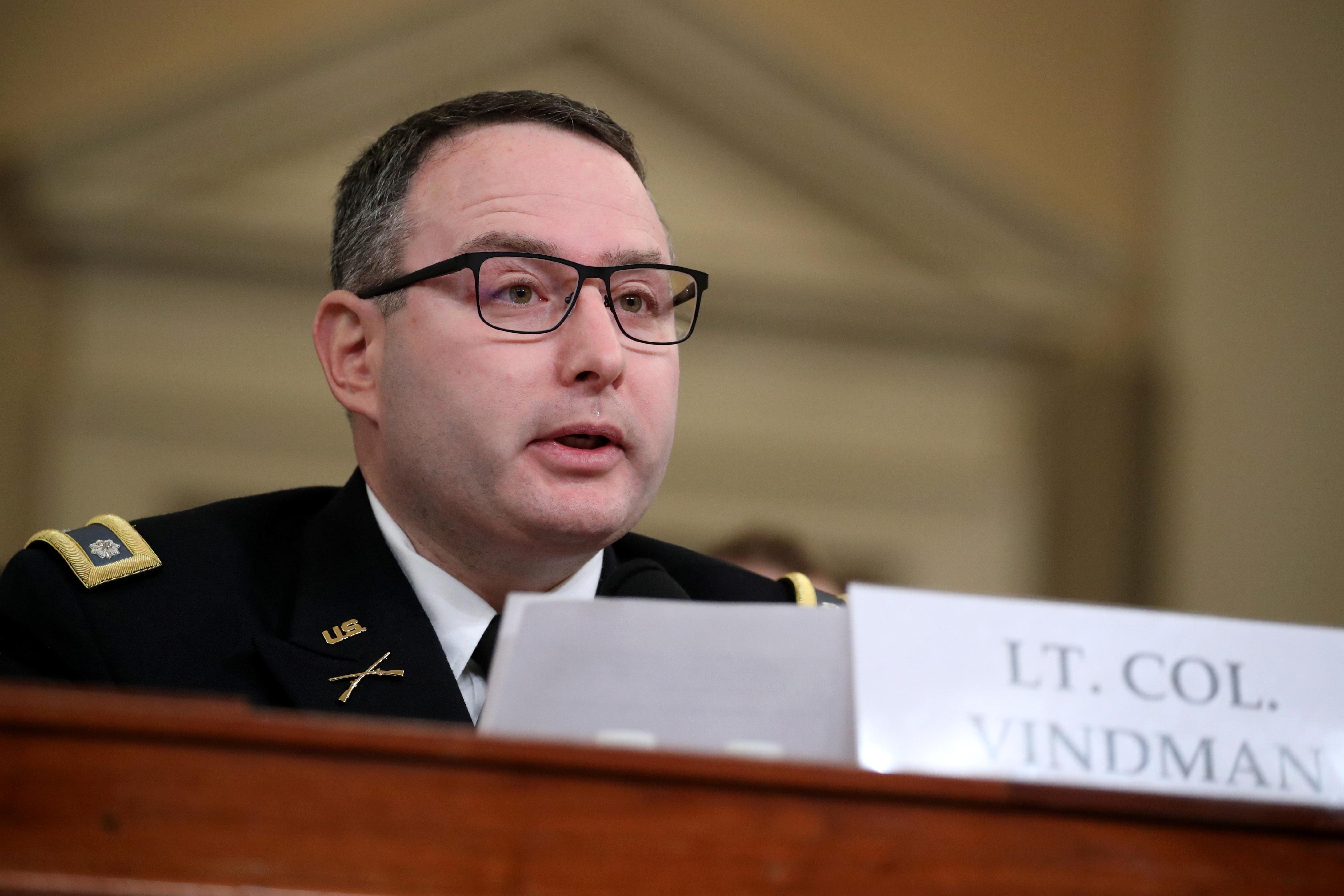 Vindman, an Army lieutenant colonel who had been due for a promotion to colonel, provided some of the most damaging testimony during an investigation by the U.S. House of Representatives into Trump’s dealings with Ukraine.

Vindman confirmed to Reuters his decision to retire and wrote on Twitter that he and his family “look forward to the next chapter of our lives.”

“After more than 21 years of military service, Lieutenant Colonel Alexander Vindman is retiring today after it has been made clear that his future within the institution he has dutifully served will forever be limited,” according to a statement from his attorney.

Vindman, then the White House National Security Council’s top Ukraine expert, testified in November that Trump’s request for an investigation into Democratic former Vice President Joe Biden and his son Hunter during a July 2019 phone call with Ukraine President Volodymyr Zelenskiy was improper.

Vindman and his twin brother, Yevgeny, were escorted from the White House in February. Vindman, a decorated combat veteran, was wounded in Iraq in 2004 by an improvised explosive device and was held in high regard by defense officials who knew him.

Trump has repeatedly complained about Vindman’s testimony and called him insubordinate.

“Through a campaign of bullying, intimidation, and retaliation, the President of the United States attempted to force LTC Vindman to choose: Between adhering to the law or pleasing a President,” the statement from Vindman’s attorney said.

By retiring, Vindman, 45, defuses what could have become a contentious political battle between Senate Democrats — who were eager to shield his promotion from political interference — and Trump’s Republicans that could have dragged the military into a battle with the White House.

Last week, Democratic U.S. Senator Tammy Duckworth, herself a veteran, said she would put a hold on the confirmation of over 1,000 military promotions until Defense Secretary Mark Esper provided assurances that Vindman’s promotion would not be blocked.

On Wednesday, Duckworth said she would keep her hold in place “until the Secretary of Defense provides a transparent accounting of this disgraceful situation.”

“Secretary Esper’s failure to protect his troops sets a new, dark precedent that any Commander in Chief can interfere with routine merit-based military promotions to carry out personal vendettas and retaliation,” Duckworth, a former Army National Guard helicopter pilot who lost both legs when she was shot down in Iraq in 2004, said in a statement.

In the letter, Vindman’s attorney also alleged that Trump was forcing him to choose between “protecting his promotion or the promotion of his fellow soldiers.”

“These are choices that no one in the United States should confront, especially one who has dedicated his life to serving it,” the letter said.

Esper said in November that Vindman should not fear retaliation over his testimony. At the time, Esper said he had reinforced the “no retaliation” message in a conversation with the secretary of the Army.

A defense official, speaking on condition of anonymity, said Esper had approved Vindman for promotion to colonel on Monday as part of a list of promotions due to be sent to the White House.

VINDMAN TAKES HIMSELF ‘OUT OF THE EQUATION’

Risa Brooks, a professor at Marquette University with a focus on civil-military relations, said Vindman’s departure forestalled a potential clash between the White House and Pentagon.

“He did what he did before, a patriotic thing, which is to say, ‘OK, I’ll just take myself out of the equation,’” she added.

John Bolton, Trump’s former national security adviser, who did not testify before the House but later published a scathing book about Trump, told MSNBC television that Vindman’s decision to retire was a “loss for the country.”

Vindman, in his testimony before the House impeachment inquiry, at one point addressed his father, an immigrant from the former Soviet Union, telling him not to fear for him and commending his decision to come to the United States in search of a better life.

“Do not worry, I will be fine for telling the truth,” he said in his testimony.

Tags: de, RUSSIA, Trump, US, USA, VINDMAN
You may also like
Recent News: