The Prime Minister has repeatedly warned the EU the UK is willing to walk away with no deal. And yesterday Mr Johnson told European Union chief negotiator Michel Barnier there is “no basis for negotiations” adding there was little point in him coming to London next week.

His tough approach throughout the talks has been warmly welcomed, an Express.co.uk poll has found.

The online survey revealed a massive majority of readers are fully behind the Prime Minister as he stands up to Brussels.

Readers were asked: “Should Boris follow through on threat to walk away from EU with no deal?”

A staggering 97 percent (9,400 people) said Boris was right to follow through with his threat to walk away from the talks with no deal.

A total of 9,791 readers took part in the online poll which opened 3pm yesterday and ran until 9am today. 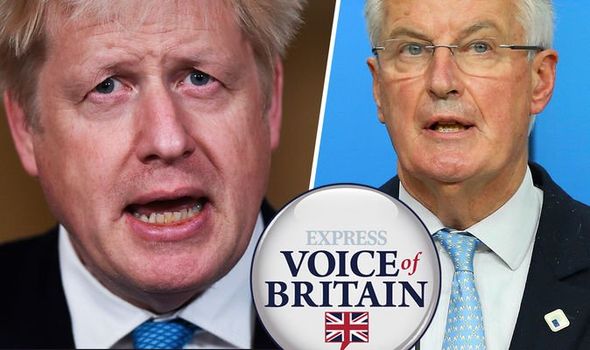 Responding to the poll, one reader said: “Now shred that withdrawal agreement up and post it back to Barnier, Macron and Merkel with a note attached saying ‘You know what you can use this for’.”

Another said: “End this nonsense now Boris. WALK AWAY now.”

Another reader said: “Yes! Walk away now on WTO terms. No more negotiations until after January 1 – then only on singular specific areas of mutual interest.”

READ MORE:Brexit LIVE: Boris left with ‘no choice’ but to shut door on EU 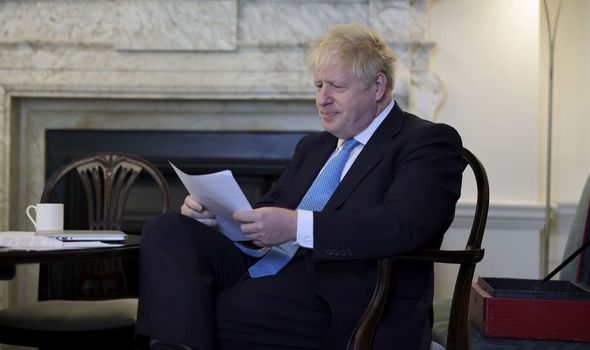 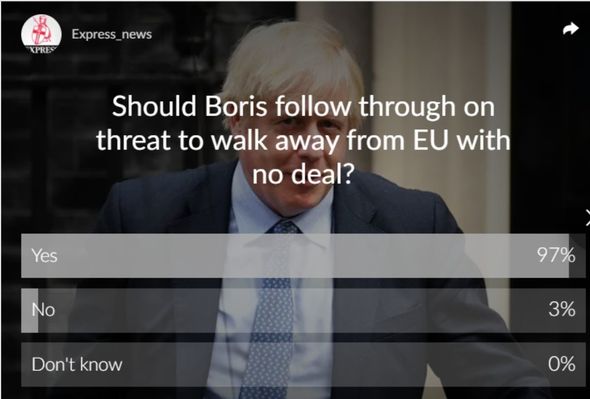 But another reader questioned if Mr Johnson was the right man to lead the country through Brexit.

He said: “I believe that I am not alone in thinking that Boris isn’t any different to May.

“Oh, how I wish Nigel Farage, who is Prime Minister in waiting, would stop standing on the sidelines and put his best foot forward and lead our country forward.

“Nigel seems to be the only one who sees through these ducks and swerves that we have had served up for years now!”

The Prime Minister accused European leaders of having “abandoned the idea of a free trade deal” and told the country to “get ready” for a no deal outcome in the negotiations after his October 15 deadline for reaching an agreement passed.

European Commission president Ursula von der Leyen had responded to his media statement by vowing that the EU would carry on negotiating, suggesting talks next week in London would go ahead as planned.

But Lord Frost, the UK’s chief negotiator, spoke with his counterpart Michel Barnier to tell him not to make the trip across the Channel next week.

The pair, however, pledged to speak “early next week” in an indication that hopes of talks continuing have not been entirely extinguished, despite Downing Street telling reporters the negotiations were now “over”.

DON’T MISS
Britain to ‘prosper’ REGARDLESS of whether EU gives us deal says Boris[FOCUS]
Boris has reached the right solution on Brexit says NIGEL FARAGE[OPINION]
Brexit deadline day: What happens if the EU and UK don’t reach a deal?[ANALYSIS] 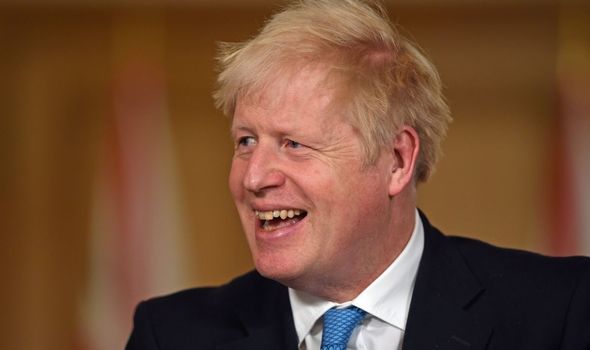 A Number 10 spokesman said: “Lord Frost has spoken to Michel Barnier to update the EU on the Prime Minister’s statement.

“Lord Frost said that, as the Prime Minister had made clear, the European Council’s conclusions yesterday had left us without a basis to continue the trade talks without a fundamental change in the EU’s approach to these negotiations.

“There was accordingly no basis for negotiations in London as of Monday.

“He and Michel Barnier agreed to talk again early next week.”