In a debate that quickly became chaotic, former Vice President Joseph R. Biden Jr. tried to break through as President Trump controlled the evening’s structure and tone, often upending the process. Entering the event, Mr. Biden had faced questions from opponents and some Democrats about his ability to combat Mr. Trump — but the Democratic nominee largely acquitted himself as capable and more statesmanlike.

Several reaction polls from cable news networks and independent groups portrayed Mr. Biden as the debate’s winner. There were also moments when the former vice president, who had been cautioned about falling into the trap of debating Mr. Trump on a personal level, engaged in some ad hominem attacks that drifted outside expectations.

Here are four moments from the debate where Mr. Biden stood out:

‘Will You Shut Up, Man?’ Biden Tells Trump

Joseph R. Biden Jr. asked President Trump to stop interrupting him while he tried to finish his remarks during the debate.

“Vote now.” “Are you going to pack the court?” “Make sure you in fact let people know, your senators. “He doesn’t want to answer the question.” “I’m not going to answer the question, because —” “Why wouldn’t you answer that question?” “— because the question is, the question is —” “A lot of new Supreme Court justices, radical left —” “Will you shut up, man?” “Listen, who is on your list, Joe? Who’s on your list?” “This is so —” “All right, gentlemen —” “This is —” “I think we’ve ended the —” “This is so unpresidential.” “So you pack the court —” “No, no, we have ended this segment.” 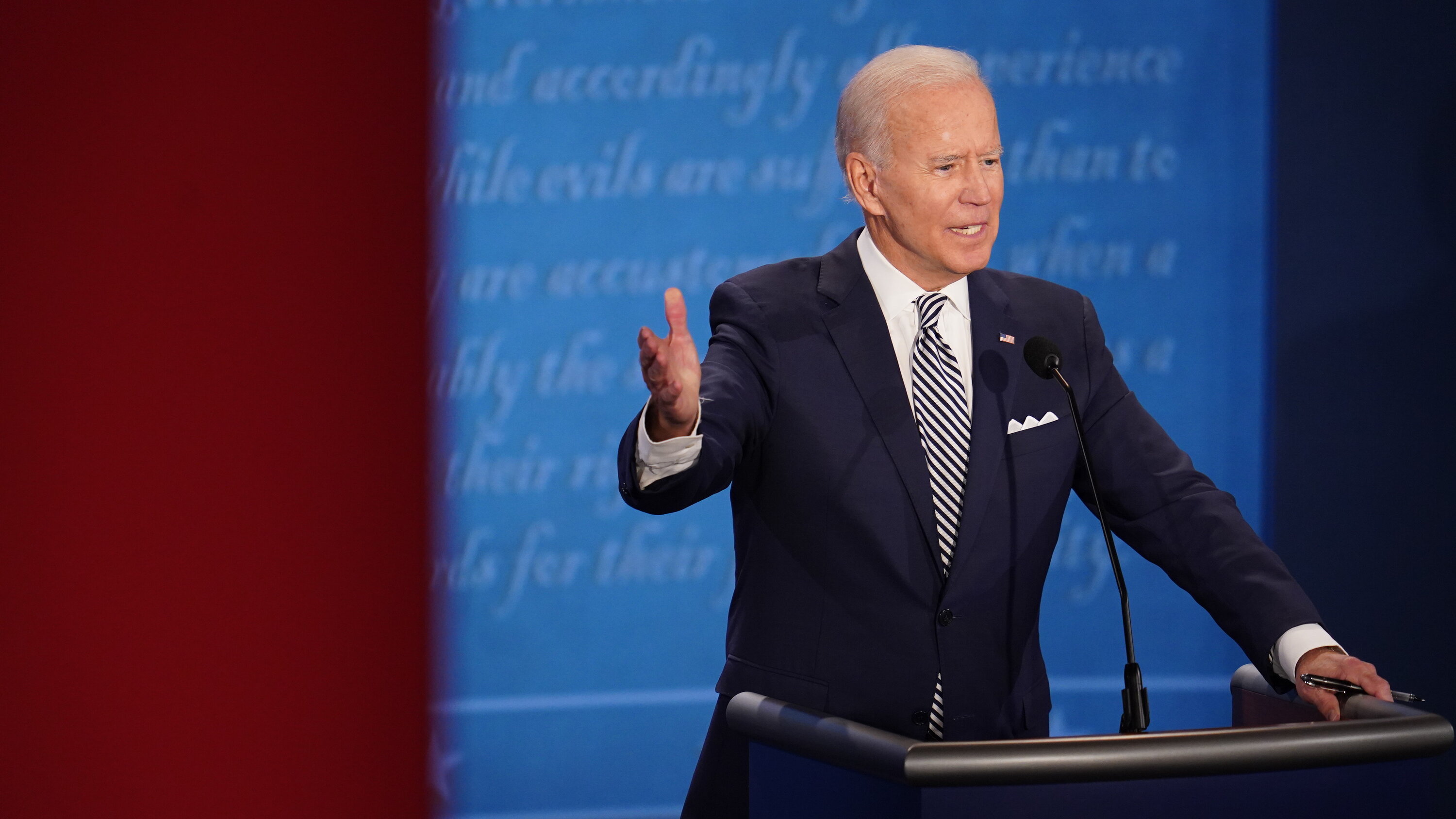 The tone of the debate was set early, as a question about the Supreme Court vacancy created by the death of Justice Ruth Bader Ginsburg set off a back-and-forth between the candidates that quickly turned personal.

As Mr. Biden tried to restart his explanation, the president cut him off again, and the Democratic nominee shot back: “Will you shut up, man?”

Within minutes, the campaign had printed T-shirts as the comment went viral, a reflection of the Biden team’s confidence that Mr. Trump’s behavior during the debate would be panned by large numbers of voters. It also fit with an argument Mr. Biden has made his entire career: that he was a politician who would stand up to a so-called bully.

Trump Is Asked About Taxes in Debate

In the presidential debate, Joseph R. Biden Jr. asked President Trump about his tax returns after a recent report revealed that he had paid only $750 in federal income taxes in 2016 and 2017.

“Is it true that you paid $750 in federal income taxes each of those two years?” “I’ve paid millions of dollars in taxes, millions of dollars of income tax. And let me just tell you, there was a story in one of the papers, I paid —” “Show us your tax returns.” “I paid $38 million one year. I paid $27 million —” “Show us your tax returns.” “The tax code that made him, that put him in a position that he pays less tax than a schoolteacher, on the money a schoolteacher makes, is because of him taking — he says he’s smart because he can take advantage of the tax code, and he does take advantage of the tax code. That’s why I’m going to eliminate the Trump tax cuts.” “Good.” “And we’re going to, I’m going to eliminate those tax cuts —” “OK.” “— and make sure that we invest in the people who in fact need the help. People out there need help.” “But why didn’t you do it over 20, the last 25 years?” “Because you weren’t — because you weren’t president screwing things up.” “You were a senator —” “You’re the worst president America’s ever had.” 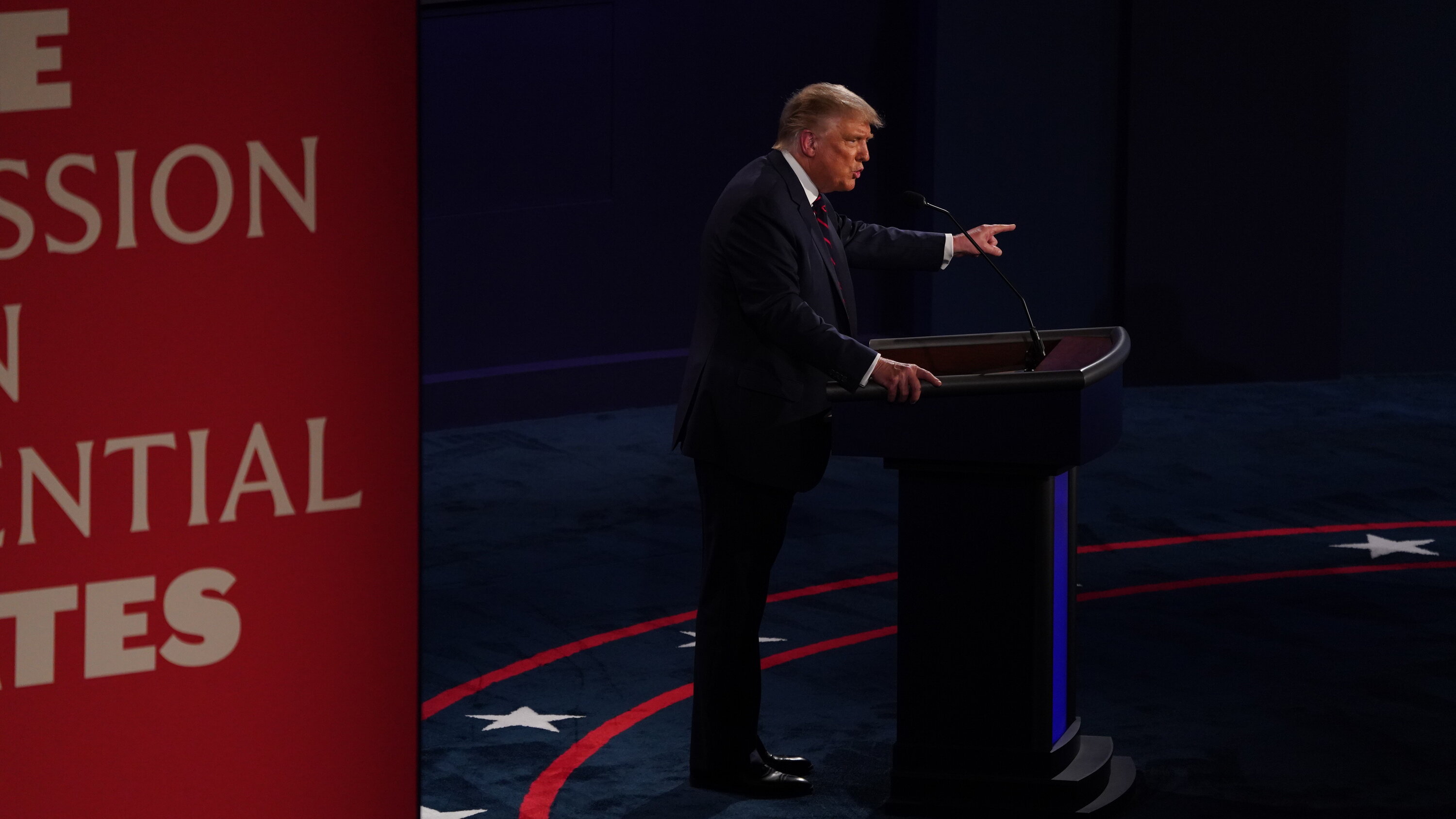 Mr. Biden’s campaign has sought to make the election a referendum on Mr. Trump’s conduct, particularly his handling of the coronavirus pandemic. On the economy, Mr. Biden’s focus has been the tax breaks that Mr. Trump and Republicans have passed.

A recent report by The New York Times highlighted records showing that Mr. Trump had paid $750 in federal income taxes in both 2016 and 2017, reigniting debate about how the wealthy businessman has contributed to society.

During an exchange on this topic, Mr. Trump cut Mr. Biden off as the former vice president argued that the current administration’s tax cuts had been ill advised, saying that Mr. Biden’s long career in public service should have produced the improvements he sought. Mr. Biden responded with a blunt retort: “You’re the worst president America has ever had.”

‘I am the Democratic Party’

‘My Party Is Me,’ Biden Says When Questioned on Health Care

Joseph R. Biden Jr. said that he, not others in the Democratic Party, represented the Democrats’ stance on health care.

“What I have proposed is that we expand Obamacare. And we increase it; we do not wipe any — and one of the big debates we had with 23 of my colleagues trying to win the nomination that I won were saying that Biden wanted to allow people to have private insurance still. They can, they do, they will, under my proposal.” “That’s not what you’ve said, and it’s not what your party has said.” “That is simply a lie.” “Your party doesn’t say it — your party wants to go socialist medicine.” “My party is me. Right now, I am the Democratic Party.” “And they’re going to dominate you, Joe, you know that.” “I am the Democratic Party right now. The platform of the Democratic Party —” “Not according to Harris.” “— is what I, in fact, approved of.” 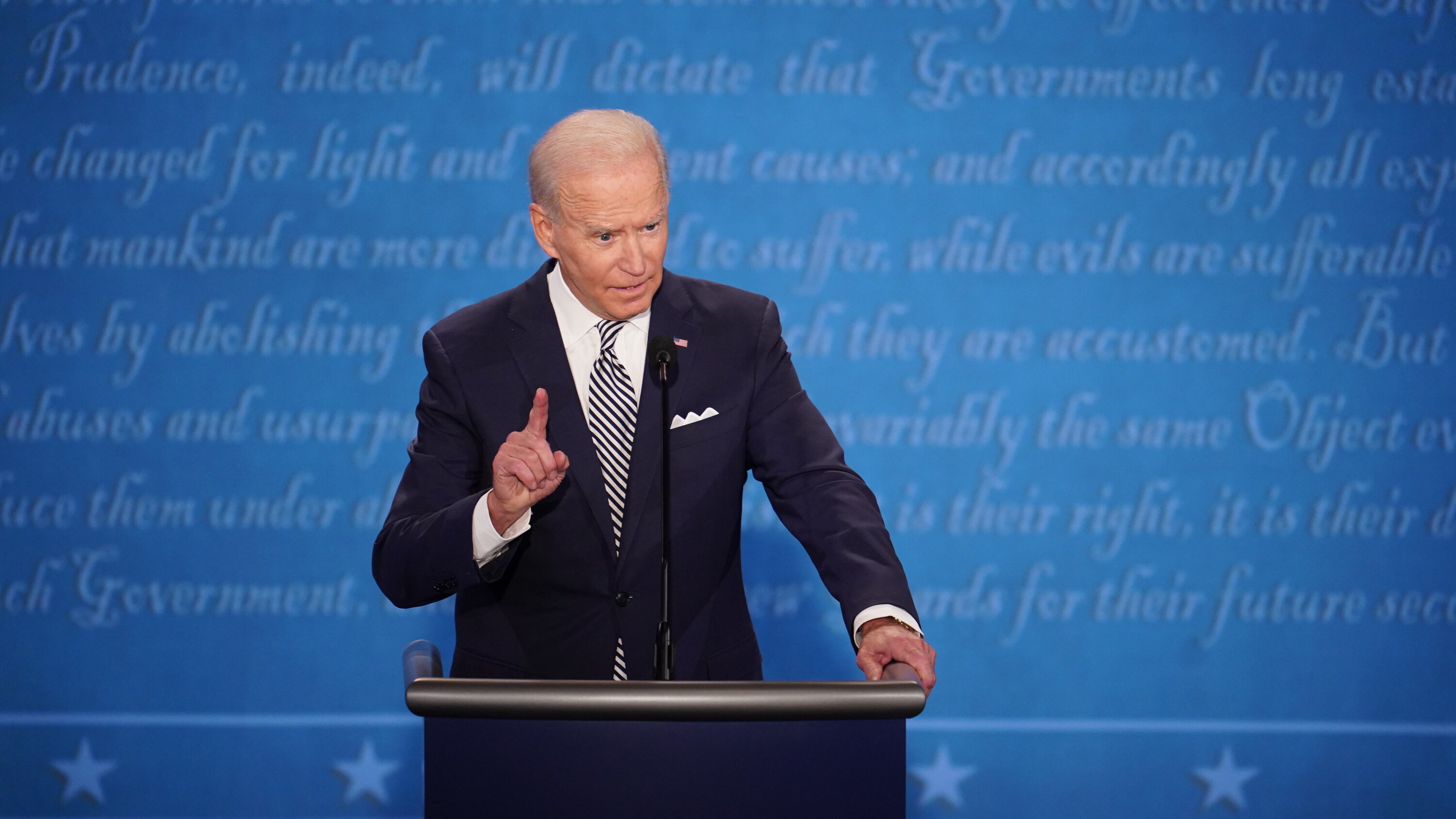 Mr. Trump has a clear strategy: trying to tie Mr. Biden to fringe areas of the Democratic Party, including the progressive wing. But Mr. Biden had prepared for such attacks before the debate, and he was ready to argue that he — not others — represented the core of Democratic Party. In one moment, Mr. Biden encapsulated in five words his response to the Republican belief that he would be swayed by a subsection of far-left Democrats: “I am the Democratic Party.”

It played on Mr. Biden’s desire to lean on his moderate reputation. In his campaign’s telling, he is someone the country knows, and that knowledge will comfort those who fear of being lurched in a drastically more progressive direction.

A sharp exchange over Biden’s sons

“My son was in Iraq. He spent a year there. He got, he got the Bronze Star. He got the conspicuous service medal. He was not a loser. He was a patriot. And the people left behind there were heroes.” “Oh, really? Really?” “And I resent like hell …” “Are you talking about Hunter? Are you talking about Hunter?” “I’m talking about my son Beau Biden, you’re talking about …” “I don’t know Beau. I know Hunter. Hunter got thrown, Hunter got thrown out of the military. He was thrown out, dishonorably discharged …” “That’s not true. He wasn’t dishonorably …” “… for cocaine use and he didn’t have a job until you became vice president. Once you became vice president …” “None of that is true.” “… he made a fortune in Ukraine, in China, in Moscow …” “That is simply not true.” “… and various other places.” “He made a fortune.” “My son … my son …” “And he didn’t have a job.” “My son, like a lot of people, like a lot of people you know at home, had a drug problem. He’s overtaken it. He’s fixed it. He’s worked on it and I’m proud of him. “But why was he given tens of millions of dollars?” “I’m proud of my son. “All right. He wasn’t given tens of millions of dollars.” “He was given tens of millions of dollars.” “That has been totally discredited. “President Trump, we’ve already been —” “Totally discredited.” “We’ve already been through this. I think the American people would rather hear about more substantial subjects.” “So do I.” “Well, you know, as the moderator, sir, I’m going to make a judgment call here.” “I know, but when somebody gets 3 1/2 million dollars from the mayor of Moscow …” “Let’s talk about…” “That is not true.” “Gentlemen …” “That report is totally discredited.” 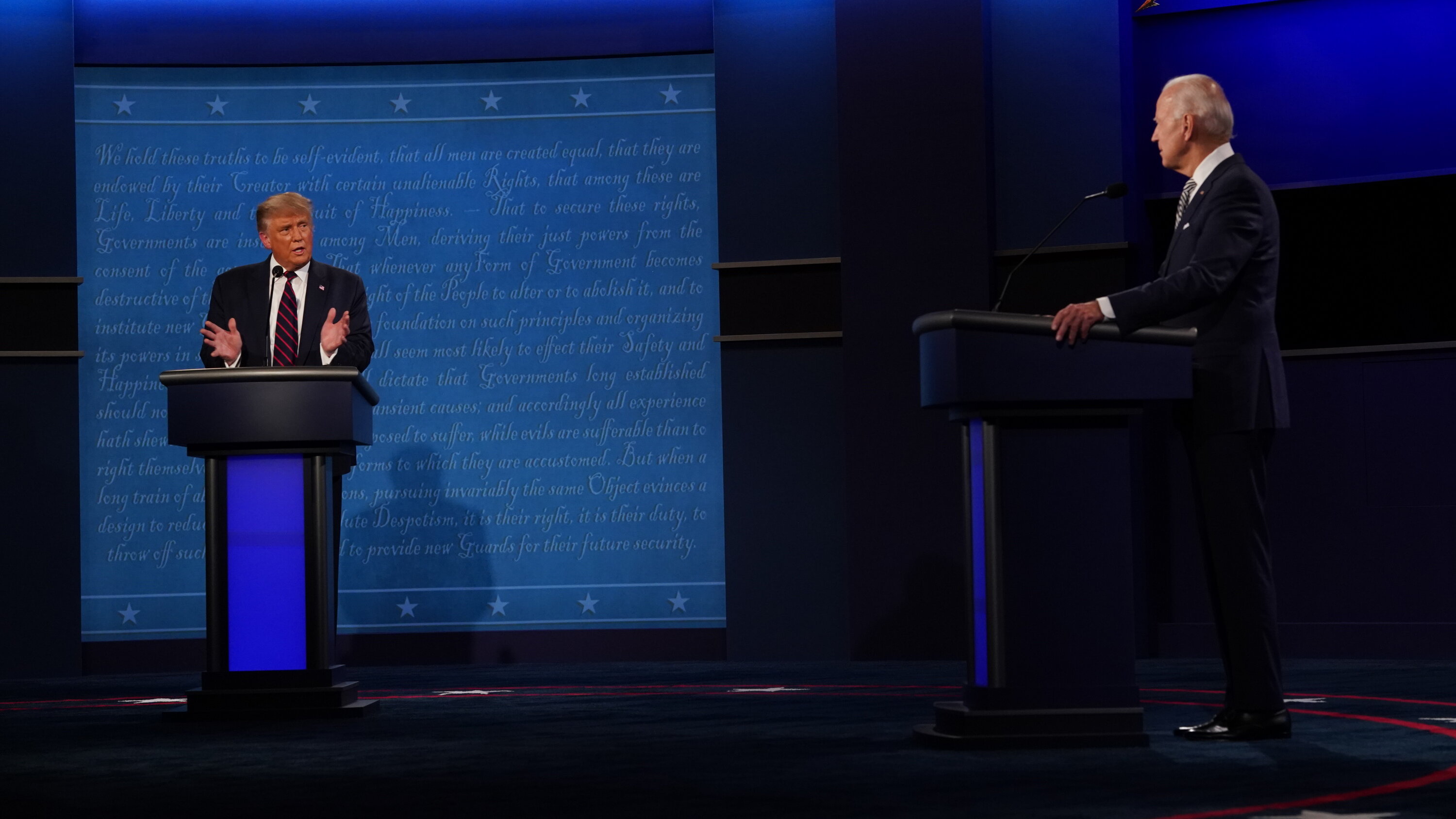 Mr. Biden, at one point, sought to confront Mr. Trump over his reported remarks about military personnel and veterans. The former vice president invoked his son Beau — a veteran who died of cancer in 2015 — and said he resented the suggestion that veterans were “losers” and “suckers,” as Mr. Trump characterized them, according to a report in The Atlantic.

It was a rare instance of Mr. Biden’s going on the offensive during the debate, in what seemed like a planned and prepared attack. It was also an area that he felt comfortable with, impugning Mr. Trump’s words while also highlighting the type of family loss that has made him more relatable to many Americans.

Mr. Trump responded by attacking Mr. Biden’s other son, Hunter. Mr. Biden acknowledged his living son’s struggle with drug addiction and said that was something many families could relate to.

The first presidential debate between President Trump and Joe Biden devolved into a brawl, as Mr. Trump urgently tried to shake up the race. Here are six takeaways.

Tags: 2020 election, Presidential deb
You may also like
Recent News:
This website uses cookies to improve your user experience and to provide you with advertisements that are relevant to your interests. By continuing to browse the site you are agreeing to our use of cookies.Ok