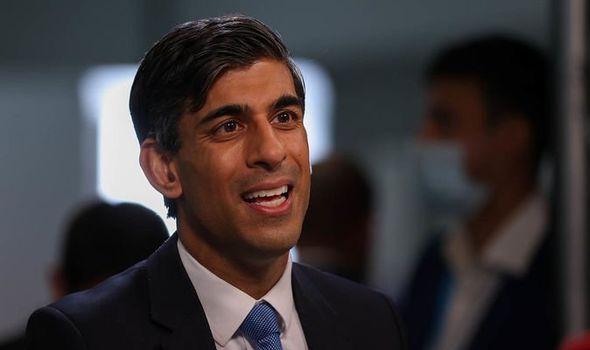 The Chancellor denied billions of fraudulent claims had been written off and said there had been 13 arrests over applications for business bounce-back funds.

Labour has accused the Treasury of failing to protect taxpayers’ cash.

Speaking before a Commons debate secured by Labour, Mr Sunak said: “Nothing has been written off in that regard.

“We are going after each and every person who we suspect of defrauding the taxpayer.”

He added: “The original estimate of fraud, and it was an estimate independently provided of £4.9billion, has actually already been revised down by a third since it was first published, thanks to the actions that we are taking.”

She told MPs: “Millions across our country are facing a cost-of-living crisis, but while many are worried about soaring energy and food bills, the Government is preparing to hike taxes for working people and businesses.

“It would be the biggest tax burden in 70 years, and while delving into people’s pockets for their hard-earned cash with one hand, the Government are throwing it away with the other.”

Tory MP Simon Fell called fraud and waste in public funds “entirely unacceptable”, but said it was important to be “realistic” about the time it takes to recover money.

Treasury minister John Glen said the Government “sprang into action” during the pandemic by unleashing £400billion to protect jobs and businesses. He told MPs the priority during the crisis had been to make sure swifter support reached those who needed it most.

Mr Glen said delays in the early stages had caused anxiety, so the Government changed the way the scheme worked to provide funding very quickly.

He insisted it “did not involve recklessness” but the scale of the operation meant it was not possible to prevent “every instance of fraud and error”.

Mr Glen said as well as 1.5 million businesses being helped by bounce-back loans, £2.2billion in potentially fraudulent claims had been blocked thanks to upfront checks.

The row comes as the Treasury select committee urges the Government today to consider creating a new department that oversees all economic crime, along with a new law enforcement agency to avoid confusion.

It is also calling for an overhaul of Companies House and to increase the price of registering a business from £12 or £13 to £100, in a bid to deter criminals from setting up shell firms.

The committee chairman, Tory MP Mel Stride, said: “One of the major reasons he [Lord Agnew] resigned is because the Economic Crime Bill is not going forward to the next Queen’s Speech.

“What the committee is saying on that is that the Government needs to identify or provide us with the details of what legislation do they think is required across this whole area of economic crime and what powers are already on the statute book.”

A report by the committee said: “Economic crime seems not to be a priority for law enforcement. The number of agencies responsible for fighting economic crime and fraud is bewildering.”