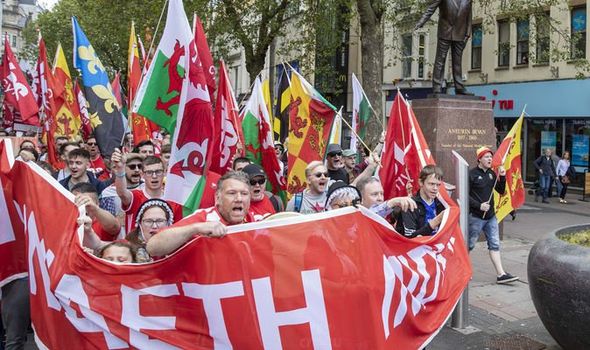 Plaid Cymru wrote on Twitter: “@AdamPrice announces he will hold an #IndyWales referendum in his first term as First Minister.”

ITV political correspondent Paul Brand responded: “This is a major development in Wales.

“Plaid Cymru offering an independence referendum in the next parliament.

But he warned that as Plaid Cymru is unlikely to win a majority in the Welsh elections, the move appears unlikely at the moment.

The ITV political correspondent continued: “With support for independence rising, this is the first time a referendum has felt like a tangible prospect, though it remains unlikely that Plaid will win a majority.”

Mr Price claimed support for Welsh independence is now at its “highest” in history, and also claimed devolution is under attack from the UK Government in Westminster.

The Plaid Cymru leader added the urgency over holding a referendum had been “accelerated”.

This is because he believes cotland will become an independent nation by 2025 and that Brexit had made a united Ireland possible.

Mr Price will fomally announce the proposal for a Welsh independence referendum during a speech in Cardiff later today.

He will says that if he is syccessful in winning a majority in next May’s elections, the country will be offered one binary choice referendum on Welsh independence by 2026, which falls within the first term of a Plaid Cymru Government.

Ahead of his speach, the party leader said: “Devolution itself – that most basic democratic principle that decisions affecting Wales should be made in Wales – is under attack from Boris Johnson’s Conservatives.

“Meanwhile, the demand for another independence referendum in Scotland is becoming unstoppable and by 2025 Scotland could well be an independent country.

“And Brexit has also given further impetus to the calls for a united Ireland.

“Wales is in real danger of being left behind as part of a rump United Kingdom, in a new England-and-Wales formation – which would be the ultimate worst of all worlds.

“It is for these reasons that I therefore pledge today that subject to party approval, a Plaid Cymru government, able to command a majority in the Senedd, will offer a referendum on independence for Wales in its first term.”

Tags: nation, POLITICS, welsh independ
You may also like
Recent News:
This website uses cookies to improve your user experience and to provide you with advertisements that are relevant to your interests. By continuing to browse the site you are agreeing to our use of cookies.Ok