WASHINGTON — For the second time in just over a year, the House on Monday sent an article of impeachment against Donald J. Trump to the Senate for trial, thrusting his fate into the hands of 50 Republican senators who for now appear reluctant to convict him.

On a day marked more by ceremony than substance, nine House impeachment managers crossed the Capitol to inform the Senate that they were ready to prosecute Mr. Trump for “incitement of insurrection,” a bipartisan charge approved after the former president stirred up a violent mob that stormed the Capitol. But with some of the outrage wrought by the Jan. 6 rampage already dissipating, few Republicans appeared ready to repudiate a leader who maintains broad sway over their party by joining Democrats in convicting him.

Senators planned to put off the heart of the trial until Feb. 9. That move will allow President Biden time to win confirmation of crucial cabinet officials and buy breathing room for Republicans to weigh their stances in what amounts to a referendum on their own futures and that of their party as much as on Mr. Trump.

Unlike Mr. Trump’s last impeachment, when his party quickly rallied behind him, several Republicans, including Senator Mitch McConnell of Kentucky, the minority leader, have signaled they are open to convicting the former president after his mendacious campaign to overturn his election loss turned deadly. That would allow the Senate to take a second vote to bar him from ever holding office again. But at least at the trial’s outset, their numbers fell well short of the 17 Republicans needed to join Democrats to secure a conviction.

A survey by The New York Times on the eve of the trial found that 27 Republican senators had expressed opposition to charging Mr. Trump or otherwise holding him accountable by impeachment. Sixteen Republicans indicated they were undecided, and seven had no response. Most of those opposed increasingly fell back on process-based objections, rather than defending Mr. Trump.

“Why are we doing this?” said Senator Ron Johnson, Republican of Wisconsin. “I can’t think of something more divisive and unhealing than doing an impeachment trial when the president is already gone. It’s just vindictive. It’s ridiculous.”

Lawmakers in both parties cautioned that Republicans’ mood could quickly shift in the weeks ahead, if more evidence broke into public view about Mr. Trump’s actions or he provoked them further with his defiant threats of retribution.

Already, unflattering new details were surfacing about Mr. Trump’s broader campaign to use his power stay in office at any cost. The Justice Department’s inspector general opened an investigation on Monday into whether current or former officials had tried to use their positions inappropriately to help Mr. Trump overturn the election outcome. The inquiry appeared to be a response to a report in The Times on efforts by a senior Justice Department official working with Mr. Trump to push top law enforcement officials to falsely and publicly use fraud investigations to cast doubt on the election outcome. 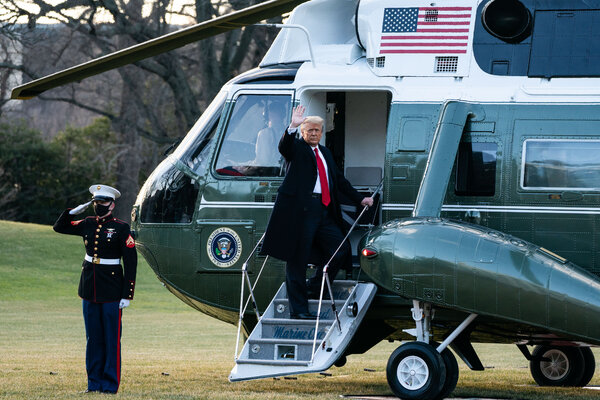 With so much at stake, senators were moving with little precedent to guide them. Mr. Trump is the only president to have been impeached twice, and the trial will be the first in which the Senate has considered convicting a former president.

With few Republicans ready to defend Mr. Trump’s actions, many have turned to arguing that the process itself is flawed because the Constitution does not explicitly say ex-presidents can be tried.

“We will listen to it, but I still have concerns about the constitutionality of this, and the precedent it sets in trying to convict a private citizen,” said Senator Joni Ernst, Republican of Iowa.

She added: “He exhibited poor leadership, I think we all agree with that. But it was these people that came into the Capitol, they did it knowingly. So they bear the responsibility.”

Irked by senators flocking to procedural claims that the trial was unconstitutional or unfair, Democrats warned Republicans that they could not hide from a substantive verdict.

“There seems to be some hope that Republicans could oppose the former president’s impeachment on process grounds, rather than grappling with his awful conduct,” said Senator Chuck Schumer of New York, the majority leader. “Let me be perfectly clear: This is not going to fly.”

Mr. Biden, who has been reluctant to comment on the proceeding, told CNN on Monday that the trial “has to happen,” even if will complicate his legislative agenda. But he cast doubt on whether the enough Republicans would vote to convict to sustain the charge.

That Republicans were going to such lengths to avoid discussing Mr. Trump’s actions underscored how precarious their political situation was. Few contest that Mr. Trump bears at least some responsibility for the most violent attack on the seat of American government since the War of 1812, and many privately blame him for costing them control of the House, Senate and White House. But he also remains a popular figure among Republican voters, and many lawmakers fear that he could marshal votes to turn them out of office should they cross him.

“I guess it depends on what state you’re in and what phase in your career you are,” Senator Lindsey Graham, Republican of South Carolina, told reporters with a chuckle when asked what would happen to Republicans who voted to convict.