When Senator Lindsey Graham joined a Republican blockade of President Barack Obama’s Supreme Court nominee in 2016, he went out of his way to frame his position that a confirmation to the court should never be allowed in an election year as principled, apolitical and utterly permanent.

“I want you to use my words against me,” Mr. Graham said then, swearing that he would hold the same stance even if it meant denying a future Republican president the chance to confirm his chosen nominee.

But less than 24 hours after that hypothetical became a reality with the death of Justice Ruth Bader Ginsburg on Friday, Mr. Graham, now the chairman of the Judiciary Committee, made a complete and brazen reversal. He promised that he would push forward immediately to confirm President Trump’s pick — seemingly unbothered by the obvious conflict between his position four years ago and his stance now.

“I am certain if the shoe were on the other foot,” Mr. Graham wrote Monday to Democrats on the judiciary panel, “you would do the same.”

Just weeks before Election Day, the turnabout by Mr. Graham, whose panel will lead the confirmation process for Mr. Trump, captures the broader flip-flop of almost the entire Senate Republican Conference, as dozens of senators who held together in 2016 to prevent Mr. Obama from filling a Supreme Court seat now rush to deliver the current president his choice to replace Justice Ginsburg.

For Mr. Graham, who is facing a tougher-than-expected re-election contest in South Carolina, it is also the latest stage in a remarkable political transformation, from conservative institutionalist and outspoken critic of Mr. Trump to a loyal foot soldier for the president.

His switch has drawn bitter criticism from Mr. Graham’s political opponents, an ad attacking him as hypocritical and even protests outside his Capitol Hill home, where demonstrators with megaphones and drums gathered Monday morning to demand he not begin the confirmation proceedings.

“He said, ‘Use my words against me!’” they chanted.

In South Carolina, Jaime Harrison, the Democrat challenging Mr. Graham, was quick to snap up the senator’s 2016 invitation to use his own statements against him.

“My grandpa always said that a man is only as good as his word,” Mr. Harrison wrote on Twitter, linking to video of Mr. Graham’s comments. “Senator Graham, you have proven your word is worthless.”

A spokesman for Mr. Graham’s campaign did not respond to a request for comment.

Mr. Graham has sought to justify his reversal as a direct response to Democrats’ attempts to weaponize the judicial confirmation process, first by doing away with the filibuster that allowed a minority to block lower-court judicial nominees, and then by stridently opposing Justice Brett M. Kavanaugh’s nomination in 2018 during a heated confirmation battle.

But the change in confirmation rules occurred in 2013, long before Mr. Graham had made his “use my words against me” declaration. And the brutal hearings on Justice Kavanaugh’s nomination had already concluded when Mr. Graham reiterated that position in an interview with The Atlantic’s Jeffrey Goldberg, saying, “If an opening comes in the last year of President Trump’s term and the primary process has started, we’ll wait till the next election.”

In the letter to Democrats on Monday, Mr. Graham offered another reason for his new stance, describing it as a matter of fairness to voters, because, “unlike in 2016, President Trump is currently standing for re-election: The people will have a say in his choices.”

Mr. Graham, too, is about to face voters, and his star turn as the ringmaster of confirmation ceremonies is likely to energize Republican voters in his home state, where the president enjoys broad support.

“I don’t know what it is about me and moments and lightning, but lightning has struck again,” Mr. Graham said at a campaign event in North Charleston on Monday.

But the spotlight is also filled with political perils for Mr. Graham. His previous comments, circulated widely in the hours after the announcement of Justice Ginsburg’s death, have injected a shot of energy — and cash — into the campaign of Mr. Harrison, who had already raised enormous sums and outspent Mr. Graham.

Under the quick timetable envisioned by Mr. Trump, who on Monday said he would prefer a confirmation vote before the Nov. 3 election, Mr. Graham would most likely be stuck in Washington in the run-up to the election, keeping him away from the campaign trail at a critical time. 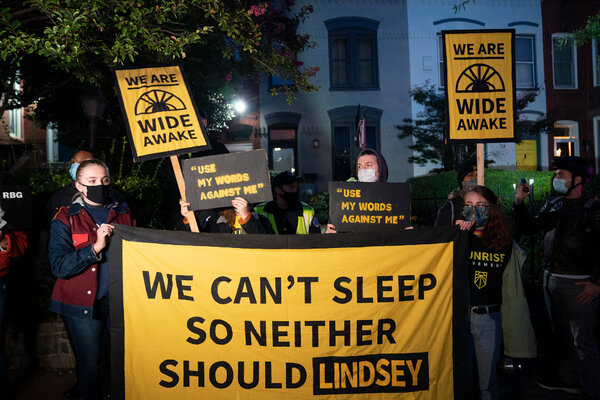 For now, his critics are seeking to increase the pressure on Mr. Graham. The Lincoln Project, a group of Republicans dedicated to defeating Mr. Trump and his allies in the Senate, has teamed with an anti-Graham political action committee to turn footage of his 2018 remarks into a television advertisement culminating with the phrase: “Hold him accountable.” A spokesman for the Lincoln Project said the group was spending $750,000 to run the ad nationally beginning Tuesday.

Allies of Mr. Graham said the chairman was personally infuriated by Democrats’ handling of Justice Kavanaugh’s confirmation, which involved allegations that he sexually assaulted a woman when they were both in high school, and has adopted a no-holds-barred attitude ever since. Mr. Graham publicly seethed that Democrats were fighting the confirmation even though he had voted for Mr. Obama’s first two Supreme Court nominees and was excoriated for it by his own party.

It was not the first time Mr. Graham had performed a striking reversal from a controversial position. In 1999, Mr. Graham, then a congressman and one of the managers of President Bill Clinton’s impeachment, argued that a president need not have committed a crime to be impeached and removed from office.

“It’s just when you’re using your office in a way that hurts people, you’ve committed a high crime,” he said.

When it came time for Democratic impeachment managers to make their case against Mr. Trump in January, they played a video clip of Mr. Graham’s two-decade-old comments to drive home their argument. (If Mr. Graham was embarrassed to have his own words come back to haunt him, it was not apparent. He had left the Senate chamber, he later said to use the restroom.)

In June, Republican Voters Against Trump aired an ad featuring a 2015 video of Mr. Graham, then a presidential candidate, calling Mr. Trump a “race-baiting, xenophobic, religious bigot” who should be told to “go to hell.” The same ad, aired in North and South Carolina, also featured an emotional Mr. Graham calling former Vice President Joseph R. Biden Jr., the Democratic presidential nominee, “as good a man as God ever created.”

It is unclear whether Mr. Graham’s latest turnabout will do lasting political damage to him. Republican strategists say that Mr. Harrison is facing an uphill battle simply by virtue of the partisan leanings of the state. Polling has shown Mr. Graham in a dead heat with his opponent, a former lobbyist who served as the first Black chairman of the South Carolina Democratic Party, and Democrats nationwide have rushed money to the race, eager to deny the incumbent a fourth term.

In South Carolina, though, where voters recently ranked the Supreme Court as one of their top issues, Mr. Graham’s central role in the confirmation hearings may prove to be a galvanizing force. Over the weekend, he was already positioning the vacancy as a defining issue of his campaign.

“I know Jaime Harrison — who opposed the Kavanaugh nomination and joined the mob in the destruction of this fine man — will oppose ANY Trump nominee,” Mr. Graham said on Twitter. “I hope the people of South Carolina know that as well.”

President Trump’s expected announcement of a Supreme Court nominee will reshape the presidential campaign and draw intense attention to a handful of Republican senators.

Early voting for the presidential election starts in September in some states. Take a look at key dates where you live. If you’re voting by mail, it’s risky to procrastinate.

Tags: 2020 election, Judi, US Politics
You may also like
Recent News:
This website uses cookies to improve your user experience and to provide you with advertisements that are relevant to your interests. By continuing to browse the site you are agreeing to our use of cookies.Ok