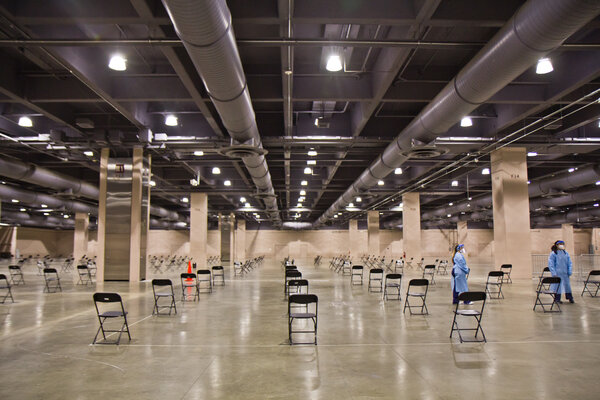 With pressure mounting to get Covid-19 vaccine doses into arms as quickly as possible, many overburdened city health departments across the country have turned to partnerships with hospitals, nonprofit organizations and pharmacies. In Philadelphia this week, one such deal went awry after the city leaned on a start-up led by college students who were eager to get involved but had little experience.

The start-up is an organization called Philly Fighting Covid, which was founded last year by a 22-year-old graduate student, Andrei Doroshin. The group quickly won plaudits for volunteering to run free testing sites and for using 3-D printers to make face shields that it supplied free to health care workers.

So when Philadelphia began receiving shipments of vaccine and needed help administering doses on a large scale, the city health department turned to Philly Fighting Covid to operate what would be the largest vaccination site in the state, at the Pennsylvania Convention Center.

It took less than three weeks after vaccinations began for the partnership to sour.

Since it opened on Jan. 8, the site has vaccinated nearly 7,000 people, though there were reports in local media that appointments had been overbooked and some people were turned away. Mr. Doroshin attributed those problems to issues with an online sign-up system that allowed thousands of ineligible people to register for appointments.

Then on Tuesday, the city health commissioner, Thomas Farley, said at a news conference that the health department would no longer work with Philly Fighting Covid. The city learned, he said, that the group had unexpectedly canceled its testing efforts to focus on vaccination; that it planned to change from nonprofit status to a for-profit company; and that it had changed its data privacy policy to allow it to potentially sell data about patients to third parties, a step first reported by the public radio station WHYY.

“We did not think that was appropriate,” Dr. Farley said about the data policy. “We thought, ‘If there’s any attempt to do this, even the possibility, then people won’t trust this organization.’”

In an interview, Mr. Doroshin said his group had only the best intentions, but he acknowledged its inexperience.

“We’re a bunch of kids,” Mr. Doroshin said. “I didn’t know anything about legal structure before this. I didn’t care. I’m not a lawyer, I’m a nerd. People are trying to make me out to be this nefarious thing. I’m like, ‘Dude, I didn’t know all the rules of a nonprofit organization until I did this.’”

He said that the company had decided to switch to a for-profit structure in order to expand quickly, and that it had not hid its intentions from the city.

Mr. Doroshin did acknowledge that there were problems with the organization’s privacy policy, which he said had been posted in haste. But he said that the group had not sold or otherwise disseminated any of the patient data it collected, and that the posted policy “was frankly just a mistake.”

Katrina Lipinsky, a registered nurse who volunteered at the group’s vaccination site, said in an interview that at the end of one day, after the group tried to find takers for a number of leftover doses, she saw Mr. Doroshin put a few in his backpack, along with the vaccination cards that are used to track vaccination timelines. She said she had reported it to city investigators.

Dr. Farley, the health commissioner, told reporters that any leftover vaccine doses should have been given back to the health department. He said the department was looking into the matter.

“If that’s true, that’s very disturbing,” he said. “They shouldn’t have done that.”

In the interview, Mr. Doroshin acknowledged that he had taken four doses home with him and administered them to friends. He said that he should have had a nurse present when he gave the shots, but that he did not regret making use of doses that would otherwise have expired that night.

“I’m OK with being a person that broke a rule to not have any vaccine left over,” he said. “If that’s the final word I have in my book, then that’s OK. I’m OK with dying with that.”