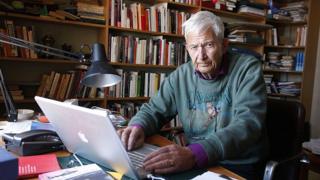 One of Sweden’s best-known authors, Per Olov Enquist, has died aged 85.

His career spanned more than half a century, and his work won acclaim not just in his native country but across Europe, especially France and Germany.

Enquist’s plays and novels – described as pessimistic in their outlook – often deal with questions of truth, and the blurred lines between fact and fiction.

The film Pelle the Conqueror, whose screenplay he helped write, won an Oscar for best foreign-language film.

Born in 1934 in northern Sweden, he penned more than 20 novels, plays and essays which have been translated into more than a dozen languages and won a number of awards at home and abroad.

The Visit of the Royal Physician – which won Sweden’s top literary honour in 1999, the August Prize – earned him broad international acclaim. It tells the story of a romance between the physician of the mad Danish King Christian VII and the queen, youngest sister of George III of England.

Enquist won a second August award for his autobiography A Different Life in 2008. He died on Saturday.

Tags: Acclaimed, author, o, Per, Swedish
You may also like
Recent News:
This website uses cookies to improve your user experience and to provide you with advertisements that are relevant to your interests. By continuing to browse the site you are agreeing to our use of cookies.Ok