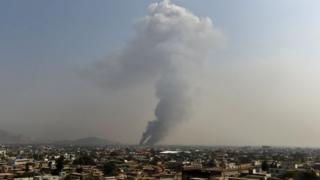 The United States and the Afghan Taliban have signed an agreement aimed at securing an end to almost 20 years of violent conflict in Afghanistan.

The deal was done after a seven-day partial ceasefire, agreed as a trust building exercise.

The two sides came together at a signing ceremony in Doha, led by US special envoy Zalmay Khalilzad and Taliban political chief Mullah Abdul Ghani Baradar.

Meanwhile, US Secretary of Mike Pompeo, who witnessed the signing, alluded to the difficult work that remains.

“I know there will be a temptation to declare victory, but victory for Afghans will only be achieved when they can live in peace and prosper,” he said.

How did we get here?

Afghanistan has been at war for more than 40 years, and following the US invasion in 2001, the conflict has also become America’s longest war.

US-led forces overthrew the Taliban government because it provided a safe haven for the al-Qaeda leadership, which directed the September 11 attacks.

A new interim government was formed, while Taliban members were classed as “enemy combatants”, with many of them killed or imprisoned.

For a while, Afghanistan seemed to be heading towards stability.

But by 2004 the Taliban were back, launching an insurgency against the government of President Hamid Karzai and the foreign troops which supported it.

When did the search for peace begin?

The first real attempt to reconcile the Taliban was the formation of the Afghan High Peace Council in 2010.

This was a group of politicians, civil society activists and former Mujahideen, also including several women as well as moderate Taliban figures.

The idea was to open up communication channels with the insurgents to talk peace.

To provide the Taliban with an address, the Qatari government agreed to establish a political office for the insurgents which opened in Doha in 2013.

But the announcement that the US would hold direct talks with the Taliban there angered then-president Hamid Karzai.

And when the Taliban flag was raised above the building and a plaque installed, reading “Islamic Emirate of Afghanistan”, President Karzai protested and the office duly closed within days.

But Taliban members stayed on in Qatar.

Meanwhile fighting in Afghanistan intensified and the Taliban gradually increased their territorial control.

How has Trump handled this?

Fast forward to 2018 when US President Donald Trump – keen to pull American troops out of Afghanistan – appointed Zalmay Khalilzad as US Special Envoy for Afghanistan Reconciliation.

Khalilzad was the top pick for the job, for many reasons. He was born in Afghanistan and had been US ambassador to the country after 2001.

He also had the right Afghan connections to make diplomacy work and has proved acceptable to most sides in Afghanistan’s complex mix of ethnicities.

During 2019, the US and the Taliban met for several rounds of talks in Doha.

The Taliban wanted a timetable for a US troop withdrawal, while the American demanded the Taliban end all ties with international terrorist groups such as Al-Qaida.

Both sides came close to a deal in September 2019, when President Trump abruptly cancelled the talks, pointing to a suicide attack in Kabul that killed 12 people including a US soldier.

The breakthrough in the talks came in February 2020 with US Secretary of State Mike Pompeo announcing that a new deal was on the table.

The Afghan government had always demanded a ceasefire to build trust – something the Taliban always rejected.

But US negotiators circumvented that hurdle by using a different term, getting agreement to the seven-day “reduction in violence” period.

With a deal signed, the real work on the detail starts now. Reports indicate that the next phase will be a gradual withdrawal of US troops over a 10- to 20-week period and a complete withdrawal over three to five years.

Meanwhile it will be up to Afghans themselves, including the Taliban, to find agreement on a political future inclusive of all.

While most Afghans want peace, not everyone is convinced by this latest attempt.

“I’m sceptical about the whole peace process,” says Hameed Miakhel, a resident of Jalalabad. “Everything has happened behind closed doors, and that makes every Afghan suspicious. I am not sure this agreement will bear fruit.”

That’s contrasted by people like Najibullah Elham, from Kabul, who says he is cautiously optimistic.

“The period of reduction in violence proved that it is possible to end this war,” he says. “But it will take immense commitment for the Afghan government and the Taliban to work on the mechanisms of peace.”

So far the Taliban insist on an “Islamic” government and reject the current constitution. But they say they will allow women to work within an “Islamic framework”.

The challenges ahead are formidable. There is hope, but scepticism runs deeper.

Tags: Afghanistan, long, road, The, TO
You may also like
Recent News:
This website uses cookies to improve your user experience and to provide you with advertisements that are relevant to your interests. By continuing to browse the site you are agreeing to our use of cookies.Ok