Afghanistan and neighbouring Pakistan are the only two countries in the world where the crippling disease remains endemic.

Vaccination teams face difficulties in both places but those in Afghanistan have been unable to work in parts of the country for much of the past three years. 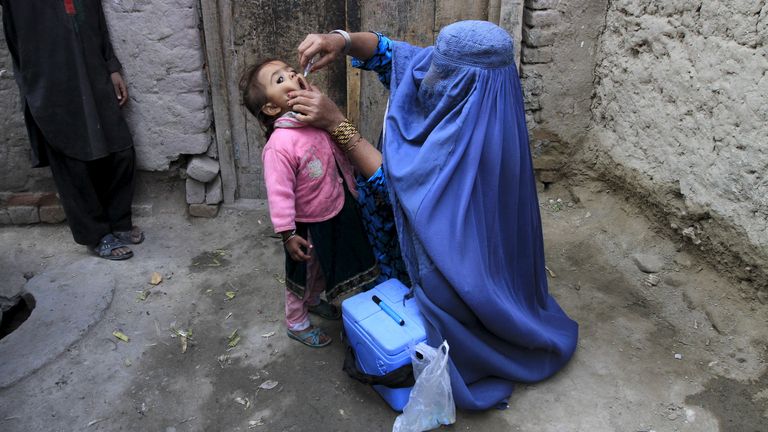 Vaccinators have faced many dangers from the long conflict, including the risk of kidnapping and roadside bombs.

There was also a Taliban ban on vaccination teams in the parts of the country it controlled before it took Kabul in August this year.

Some hardline clerics claimed the vaccinations were un-Islamic or that vaccinators were spies for the West.

This means that, since 2018, an estimated 3.3 million children have missed out on a polio vaccination.

But the apparent U-turn from the Taliban appears to be aimed at improving their profile abroad and showing they can cooperate with international agencies. Such cooperation could encourage more countries to recognise the Taliban as Afghanistan’s government, also bringing the possibility of more aid for what is a struggling economy.

The Taliban’s acting public health minister, Dr Qalandar Ebad, said: “Without any doubt polio is a disease that without treatment will either kill our children or cause them with permanent disability, so in this case the only way is to implement the vaccination.”

It is estimated that 10 million Afghan children aged under five will be targeted by the programme, which will start on Monday.

Nek Wali Shah Momin, a health ministry official in the polio eradication department, said the task ahead was “gigantic”, adding that it would need “the support of all linked departments”.

Tags: Afghanistan, four-day, launch:, TO
You may also like
Recent News: