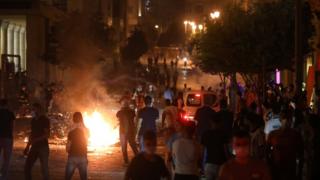 Protesters clashed with Lebanese security forces at anti-government demonstrations in Beirut on Thursday.

Officers deployed tear gas on dozens of people near parliament.

Demonstrators were angered by Tuesday’s devastating blast, which officials say was caused by 2,750 tonnes of ammonium nitrate stored unsafely since 2013.

Many in Lebanon say government negligence led to the explosion, which killed at least 137 people and injured about 5,000 others.

The explosion destroyed entire districts in the capital, with homes and businesses reduced to rubble. Dozens of people are still unaccounted for.

The state news agency says 16 people have been taken into custody as part of an investigation announced by the government this week.

He also called for an international investigation into the disaster.

A city of sirens, empty buildings and empty streets

This port was Lebanon’s lifeline to the whole world. Something like 80% of the country’s grain came through here. The grain silos, which were built way back when, are teetering. Just beyond there I can see a ship listing heavily. I’ve lived in Beirut for five years and it’s almost unrecognisable – it’s a city of sirens, of empty buildings, of empty streets.

As I look at the neighbourhood of Gemmayze just behind the port, I can’t see a single pane of glass left. Entire roofs have gone – I can see friends’ apartments which are just open to the sky now. All of this area, which was really heavily populated, has been abandoned. No-one is coming back here any time soon.

What’s really noticeable as you walk the streets here is that every second person seems to have a broom in their hand. There are clear-up teams everywhere, but it’s pretty low tech: tiny teams of people with pans and brushes to clean up an an entire city’s devastation.

The thing that really strikes me is how enormously stupid it was, what criminal negligence it took to leave this highly explosive material right in the very heart of this city, within yards of people, their homes, their businesses. And the authorities here knew – they had been warned that these chemicals were dangerous and that they were a great risk to Beirut and Lebanon.

What triggered the explosion?

The ammonium nitrate – which is used as a fertiliser and as an explosive – had been in a warehouse in the port for six years after it was unloaded from a ship impounded in 2013.

The head of the port and the head of the customs authority said that they had written to the judiciary several times asking that the chemical be exported or sold on to ensure port safety.

Port General Manager Hassan Koraytem told OTV they had been aware that the material was dangerous when a court first ordered it stored in the warehouse, “but not to this degree”. 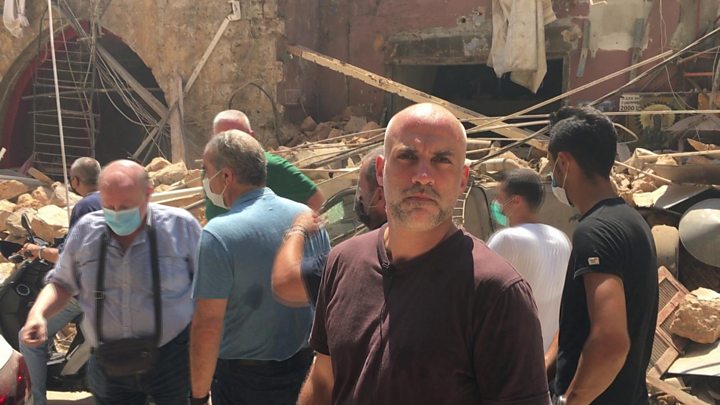 The ammonium nitrate arrived on a Moldovan-flagged ship, the Rhosus, which entered Beirut port after suffering technical problems during its voyage from Georgia to Mozambique, according to Shiparrested.com, which deals with shipping-related legal cases.

The Rhosus was inspected, banned from leaving and was shortly afterwards abandoned by its owners, sparking several legal claims. Its cargo was stored in a port warehouse for safety reasons, the report said.

More on the explosion in Beirut

What is the latest on rescue efforts?

A French rescue team working in the city said there was still a good chance of finding survivors, two days after the explosion.

One unnamed rescuer told Mr Macron that they hoped to find a group of seven or eight people believed to be trapped in a “control room” under the rubble.

Earlier media reports that a father-of-two, Amin Zahid, had been rescued from the sea on Thursday morning have been thrown into doubt after comments under an Instagram account set up to help families locate missing people suggested that the man pulled from the sea was not him. A new account appealing for information about Mr Zahid has been set up.

Security forces have sealed off a wide area around the blast site.

Public Health Minister Hamad Hassan said Lebanon’s health sector was short of beds and lacked the equipment necessary to treat the injured and care for patients in critical condition.

As many as 300,000 people have been left homeless by the blast, said Beirut’s governor Marwan Aboud.

He told the BBC: “Beirut needs food, Beirut needs clothes, houses, materials to rebuild houses. Beirut needs a place for the refugees, for its people.”

Economy Minister Raoul Nehme meanwhile said the country would have to rely at least partly on foreign aid to rebuild.

“We’re not swimming in dollars,” he told Sky News Arabia.

The explosion comes at a sensitive time for Lebanon. Covid-19 infections were on the rise and hospitals were already struggling to cope.

The country is also going through the worst economic crisis since the 1975-1990 civil war, and tensions were already high with street demonstrations against the government. People have to deal with daily power cuts, a lack of safe drinking water and limited public healthcare.

Lebanon imports most of its food and large quantities of grain stored in the port have been destroyed causing fears of widespread food insecurity to come. The future of the port itself is in doubt.

Have you been personally affected by this story? If you feel able to do so please share your experiences by emailing [email protected].

Please include a contact number if you are willing to speak to a BBC journalist.

Or use the form below:

If you are happy to be contacted by a BBC journalist please leave a telephone number that we can
contact you on. In some cases a selection of your comments will be published, displaying your name as
you provide it and location, unless you state otherwise. Your contact details will never be published.
When sending us pictures, video or eyewitness accounts at no time should you endanger yourself or others,
take any unnecessary risks or infringe any laws. Please ensure you have read the terms and conditions.

Tags: Anti-government, break, PROTESTS
You may also like
Recent News:
This website uses cookies to improve your user experience and to provide you with advertisements that are relevant to your interests. By continuing to browse the site you are agreeing to our use of cookies.Ok