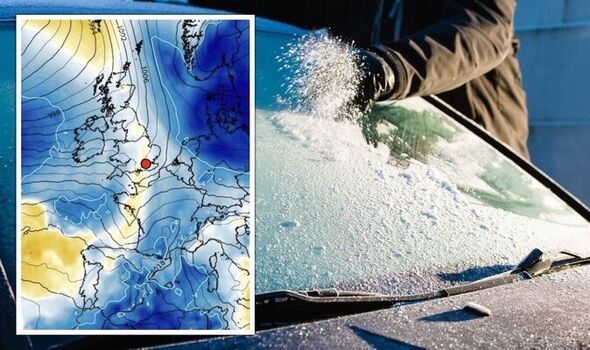 Temperatures will plummet as northerly winds sweep in making it feel close to -8C in Scotland while windchill temperatures fall between freezing and -4C across northern Britain.

The Polar front, the meeting point of airmasses separating the Arctic and northern Europe is about to plunge southwards across Britain, forecasters warn.

Jim Dale, meteorologist for British Weather Services, said: “There will be some snow over the Highlands of Scotland on Saturday night before the Polar front moves southwards through Sunday putting the UK in a Polar airmass.

“The windchill will bring temperatures down further, knocking a couple of degrees of real temperatures, so if thermometers are at 2C, it will feel like freezing.

“On Sunday, we will be in the cold air, so it will be brighter, but chillier.”

Parts of Britain will remain unsettled, he said, with heavier downpours arriving ahead of the new week.

He added: “Fronts will come in from low-pressure systems stalled in the mid-Atlantic.

“It is a headache for forecasters working out the where’s and when’s, but the general theme will be a continuation of what we have seen over the past few days.”

Swathes of Britain will wake to a chilly start to the weekend with parts of the country facing the first frosts for weeks.

Met Office meteorologist Alex Deakin said: “On Saturday morning, we are likely to see a frost across Northern Ireland, Wales and parts of southern England, something we haven’t seen of late.

“In rural spots we could be as low as -3C or -4C on Saturday morning.

“High pressure will bring many places a fine day, but a weather front comes swinging in bringing a spell of rain.

Heavy rain will move in through the latter part of the weekend driven by blustery winds, he added.

He said: “The weekend can be summed up as chilly start.

“Certainly, a frost is likely for some, then it will be a largely fine day on Saturday before the next band of rain comes in from the west bringing rain mostly overnight. and that will be followed by blustery showers into Sunday.”

Weathertrending meteorologist John Hammond warned of the continued risk of hill snow through next week.

He said: “It will be quite chilly with the possibility of some rain pushing in from the west.

“We can’t discount the possibility of snow for the higher hills and mountains early in the week.

“And in between the wetter spells, the air will be cold enough for some overnight frost.

“We can say goodbye to the warmth, I think, November will be back to normal.”

With more rain in the forecast, Bookmaker Coral is now odds on at 4-6 for the wettest November on record.

Spokesman John Hill said: “With more heavy rain set to come down over the next few days, the chances of this month ending as the wettest November on record are increasing all the time.

“Our odds suggest there is a 60-per cent chance this month will be a record-wet November by the time it is over.”