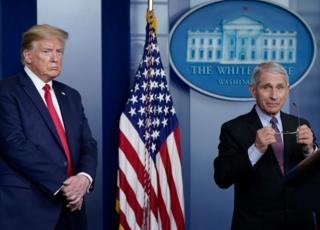 After more than 40 state-wide lockdowns were put in place across the US throughout March and April, many states are now easing restrictions – but some are going against White House guidelines, worrying public health experts.

Dr Anthony Fauci, the White House’s top infectious disease adviser, has said he’s concerned some states are opening up too soon and risk triggering “an outbreak that you may not be able to control”.

Dr Fauci said: “I’ve been very clear in my message to try, to the best extent possible, to go by the guidelines that have been very well thought out and very well delineated.”

What are the guidelines?

The reopening guidelines laid out by the Trump administration in April propose that states should have a “downward trajectory” of reported cases, or a falling share of positive tests, over a 14-day period before beginning a gradual reopening.

They also say states should have a robust testing programme in place and hospitals shouldn’t be overwhelmed.

These are only guidelines and the decision is ultimately down to state governors. President Trump has also repeatedly encouraged states to open up, seemingly going against his administration’s guidance.

Since the guidelines were announced on 16 April, more than 30 states have partially reopened.

Have states seen a downward trend in daily cases?

Daily coronavirus cases are increasing in a handful of states, but most are seeing a plateau, with neither a significant rise nor fall in reported daily cases.

Far fewer states are seeing a sustained decline – or a “downward trajectory of documented cases within a 14-day period” as recommended by the White House reopening guidelines.

But as testing expands, the government guidelines allow for an increase in daily cases if there’s a decrease in the proportion of positive tests – as more testing is likely to produce more cases overall. But some states didn’t meet these criteria before reopening either.

For example, in Missouri, gyms, restaurants, bars, retail stores, hairdressers and theatres reopened with limited capacity on 4 May. This was despite the state’s daily coronavirus cases and share of positive tests rising over the previous two weeks.

Kansas also reopened restaurants and retail stores on 4 May without seeing a two-week fall in either daily cases or in the proportion of positive tests.

Many other states saw a rise in daily cases in the two weeks prior to reopening, but are testing more widely so the proportion of positive tests dropped.

For example, in the US’s second most populous state, Texas, retail stores, restaurants and theatres reopened with limited capacity on 1 May. This was despite daily coronavirus cases rising over the previous two weeks.

Since then Texas has registered more than 1,000 new daily cases nine times in the first two weeks of May, compared with just once in the last two weeks of April.

Dr Tom Tsai, a public health expert at Harvard University, says that “for lots of states we are in the period where there’s a lot of noise – there’s no true trajectory because we haven’t had a substantial 14-day decrease in cases”.

Is there enough testing to reopen?

The White House guidelines call on states to be prepared with a “robust” testing programme, as well as contact tracing capabilities, before reopening.

“Robust” is open to interpretation – the guidelines prioritise healthcare workers, but also recommend having the ability to test all people showing symptoms.

Experts at Harvard University have said 900,000 tests a day are needed in the US to reopen the economy. That’s about 275 tests per 100,000 people per day – only nine states are around this level of testing currently.

Many other states which have already begun to reopen fall below that benchmark, such as Georgia, Florida and Colorado.

Dr Fauci says he is concerned that if some areas “jump over those various checkpoints and prematurely open up without having the capability to be able to respond effectively and efficiently” the US could “start to see little spikes that might turn into outbreaks”.

President Trump has promised to work with state governors to expand testing, and says he’s “confident that we have enough testing to begin reopening and the reopening process”.

But medical experts are not so sure, and worry that sufficient testing and tracing capabilities were not in place before many states reopened.

Tags: Are, reopening, So, states, too, US
You may also like
Recent News:
This website uses cookies to improve your user experience and to provide you with advertisements that are relevant to your interests. By continuing to browse the site you are agreeing to our use of cookies.Ok