About 600 people are now reported to have died in clashes between Armenian and Azerbaijani forces over the mountain enclave of Nagorno-Karabakh.

The contested territory’s military said 16 more of its service people were killed in fighting on Tuesday – bringing the total number of those killed to 532 since fighting started on 27 September.

Azerbaijan is yet to disclose its military fatalities – but authorities reported that 42 civilians had been killed. 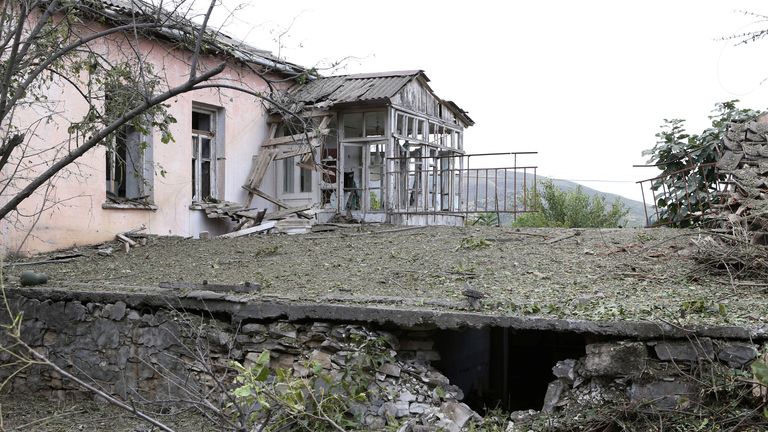 It is thought the overall number of those who have lost their lives from fighting is much higher, as both sides regularly claim to have inflicted significant military causalities on the other.

The area’s human rights ombudsman Artak Beglaryan reported that about 31 civilians had died on Monday – with hundreds more injured.

He tweeted that recent strikes on Ghazanchetsots Cathedral in the disputed territory town of Shusha – which Armenia has accused Azerbaijan of being responsible for – was tantamount to a war crime and used the hashtags “#AzerbaijaniAggression” and “#WarCrimes”.

The conflict over Nagorno-Karabakh has spanned over 25 years and both Armenia and Azerbaijan have repeatedly accused the other side of attacks, amid global appeals to end the hostilities and initiate peace talks.

A ceasefire deal – brokered by Russia, which has a security pact with Armenia – was signed last week.

The truce has been challenged, however, with both sides accusing the other of continued attacks violating the agreement.

Two days ago Azerbaijan accused Armenia of breaking the agreement and killing nine civilians in a missile attack.

On Tuesday, Azerbaijani officials accused Armenian forces of shelling some of its regions.

Both the European Union and Russia are urging both sides to respect the ceasefire agreement.

Tags: Armenia-Azerbaijan, conflict:, N
You may also like
Recent News: