Remembrance Day in the nation’s capital looks a lot different this year.

Under a cover of grey clouds, federal officials and veterans commemorated the sacrifices of Canadian war dead and veterans, and marked the 75th anniversary of the end of the Second World War under tight restrictions aimed at limiting the spread of the coronavirus.

That meant many of the hallmarks of the day — solemn, silent crowds of thousands packed into the streets around the National War Memorial, and a parade of veterans accompanied by bagpiping and drums — could not happen this year.

Even the usual singing of In Flanders Field by the Ottawa Children’s Choir took place differently, with three choristers selected to sing instead of the usual group of dozens of young choristers.

The Royal Canadian Legion and officials actively discouraged people from attending in person, a move that their ceremony director Danny Martin called “disappointing” but necessary given the circumstances.

The resulting nearly-empty city streets made for a stark contrast to years past, where crowds can reach into the tens of thousands of people, all normally packed and huddling against chilly temperatures. 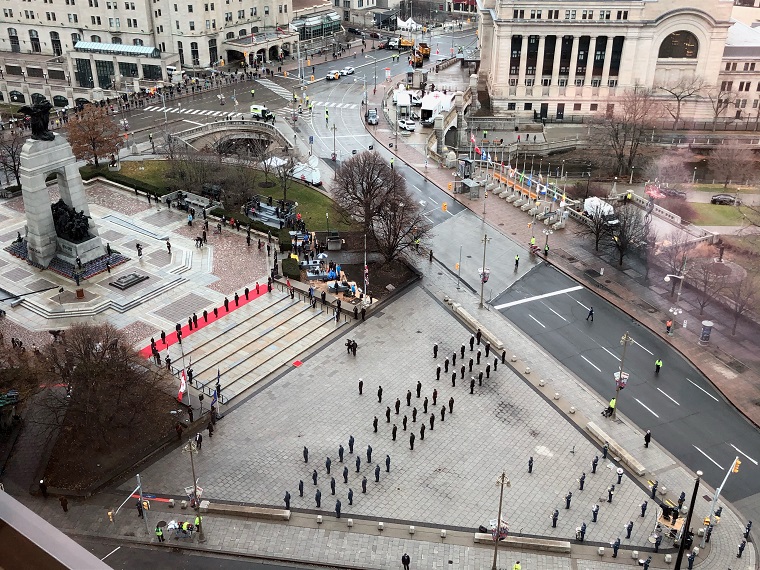 Yet some things remain the same, even in the strange new world of the pandemic.

Chief of Defence Staff Gen. Jonathan Vance was there as well, observing his final Remembrance Day ceremony as the country’s top soldier.

Vance told Global News the poignancy of that strikes deeper this year.

“I’m a bit sentimental today. It’s an honour to represent the armed forces, standing in this hallowed spot,” he said. “Having done it quite a few times now, it just makes that honour deeper.”

There was also the traditional performance of a lament, rouse, prayers and two minutes of silence, as well as a military fly-by over the capital’s downtown core.

Trudeau said in a statement that all Canadians are encouraged to watch the commemorations from home, and said it is still important to make the time to honour veterans.

He also honoured the six members of the Canadian military killed in a Cyclone helicopter crash off the coast of Greece in April while participating in a NATO training mission, as well as two military members accidentally killed on Canadian soil this year, during a Snowbird crash and a recent live-fire accident.

“Like those who have gone before them, those who may have been facing their own battles, and those whose names Canadians may not know, they gave their lives in service of a better Canada,” Trudeau said.

“Even if we are not able to gather in person today, we can still take the time to honour and remember our veterans and the fallen, especially this year as we mark the 75th anniversary of the end of the Second World War.”

“To show our gratitude and respect for the depth of their sacrifice, we hold them close to our hearts in the form of a poppy,” he continued.

Conservative Leader Erin O’Toole, who is a veteran himself, also encouraged Canadians to take time to reflect on the sacrifices made by Canadian fallen soldiers.

“Reflection, remembrance, and respect – these are not actions that can only happen during parades or at cenotaphs. They are emotional acts we will uphold during a year when Canadians have dedicated themselves to adapting and persevering through these challenging times,” O’Toole said in a statement.

“It is our duty and privilege to remember and honour the fallen sons and daughters of Canada … lest we forget their sacrifice.”

NDP Leader Jagmeet Singh and Green Party Leader Annamie Paul also shared tweets noting the sacrifices and hard work of the Canadian Forces members are especially poignant this year as so many have put their own safety at risk to volunteer in long-term care homes ravaged by the pandemic.

Tags: Coronavi, Remembrance Day 2020
You may also like
Recent News:
This website uses cookies to improve your user experience and to provide you with advertisements that are relevant to your interests. By continuing to browse the site you are agreeing to our use of cookies.Ok