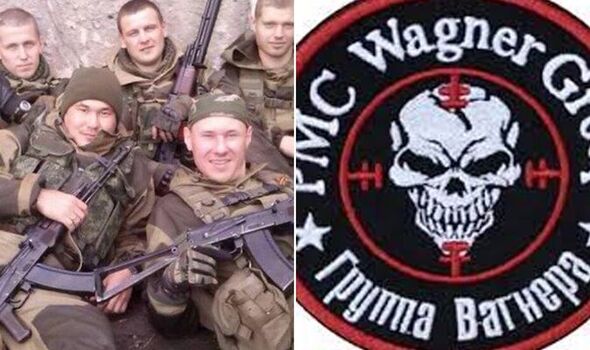 The Rusich group is a far-right Russian paramilitary unit, part of the Wagner group which came to global prominence during the war in Donbas in Ukraine in 2014. The members of the network are known for enacting hardcore atrocities including tortures, mutilations and brutal killings of innocent civilians. It is understood that the network is supported by the Kremlin in its horrible acts.

In 2015, Milchakov had posted pictures that show him removing the ears of Ukrainian soldiers in Donbas and carving the kolovrat, a swastika used on the Slav far right, into their foreheads.

The group’s insignia is the valknut, an old Norse symbol appropriated by white supremacists.

Mercenaries were photographed near the border between Russia and Ukraine on Wednesday.

They appeared, crossing into the Kharkiv region near the village of Pletenivka in Z-marked vehicles.

Pletenivka is roughly 40 miles from Kharkiv, the second city, where Ukrainian defence officials expect a renewed assault by Russian forces in the coming days.

A member of the Wagner group was photographed earlier in Donetsk.

Two pictures of him were shared on Telegram on Monday, April 4, by pro-Russian war correspondent Semyon Pegov, otherwise known as “wargonzo”.

British officials had warned that over 1,000 of their soldiers had been deployed to fight in Putin’s war against the Ukrainian people, according to the Times.

However, members of the murderous group participating in the war in Ukraine could be up to 4,000, according to the Daily Mirror.

They are recognised by the skull insignia attached on their uniform.

Sources claimed that the unit flew in from missions in Africa and the east of Ukraine with a hit-list of 24 men.

Among those is the Ukrainian President, Volodymyr Zelensky.

The group is said to be extremely well-trained and they have committed countless atrocities against innocent civilians.

It was also reported that in Donbass, one member of the Wagner group is suspected of transferring local citizens into a police station where they are being tortured and killed.

The fighters then hung the mutilated corpses of their tortured prisoners in public view as a warning, it was reported.