BBC Weather meteorologist Louise Lear forecast a dramatic drop in temperature for most of the UK, the result of a bitterly cold weather front moving in from the Arctic. The forecaster said temperatures will slowly plummet through Sunday thanks to the aide of piercing winds slamming through the whole country. Ms Lear said: “You are really going to notice the difference this morning when you step out.

“Here it is, this cold front that’s been sinking in its way slowly southward through the night has already introduced that bitterly cold air across much of Scotland, and strong, gusty northeasterly winds.

“It’s worth bearing in mind that it’s probably sitting over the north of England as we speak, so not for all of us at the moment.

“A few scattered showers across the southeast but here, really from Lincolnshire down to Bristol, maybe starting off with some sunshine.

“There’s a weather front, a band of cloud, some rain. It’s not really the rain that’s the issue, it’s the direction and the strength of the wind.” 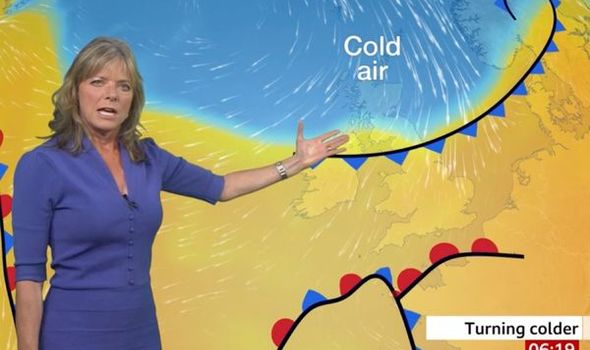 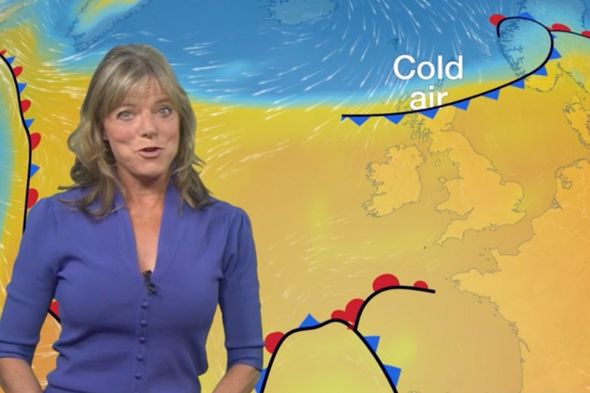 Despite Ms Lear warning of only scattered showers for most of Sunday, weather forecaster Netweather issued a thunderstorm warning.

The forecaster said: “The capped anticyclonic mid/upper levels to support localised heavy showers and perhaps an isolated weak and short-lived thunderstorm to develop this afternoon.

Ms Lear also warned gusty winds will contribute to giving the cold weather front an even colder feel: “Some sunny spells, a few scattered showers, may continue to be wintry in the top grounds, but with that sunshine shouldn’t be too much of an issue. 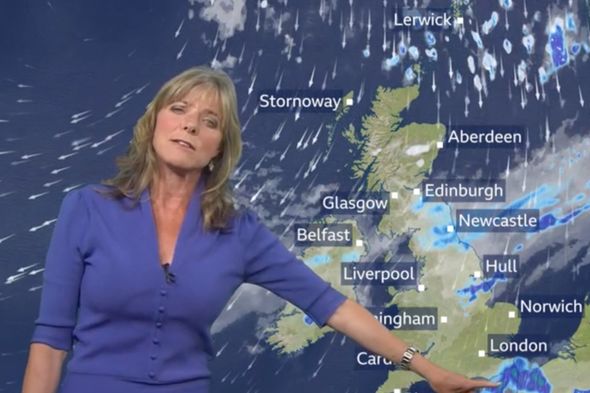 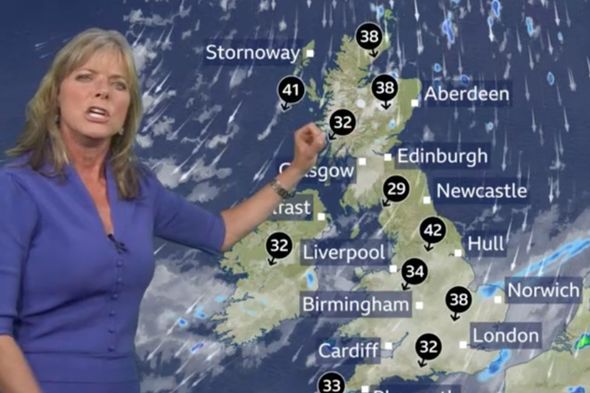 “But look at this, gusts of winds between 30mph and 40mph. So a marked difference to the feel of the weather generally across of the country.

“The temperatures are likely to struggle, particularly in the exposed north and east coast where we’ve got the strongest of the gusts.

“But we could see temperatures of around 15C to 18C in one or two places, maybe even 20C. But that colder air is pushing down through the afternoon.”

The BBC Weather forecaster said the cloud is set to lift as Sunday develop, leaving skies clear and subsequently causing temperatures to drop even further.

Frost is likely to be widespread on Monday morning, with temperatures remaining low compared to the double-digit highs most Britons experiences last week. 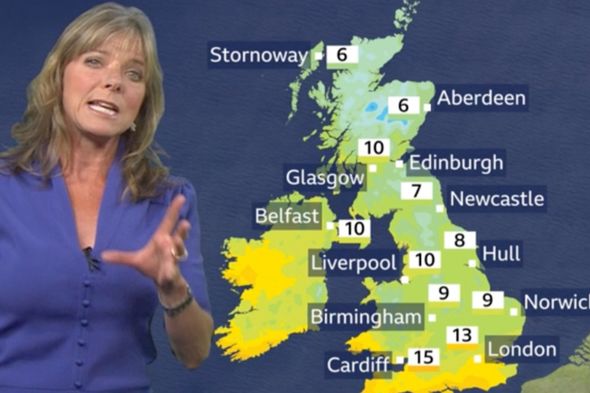 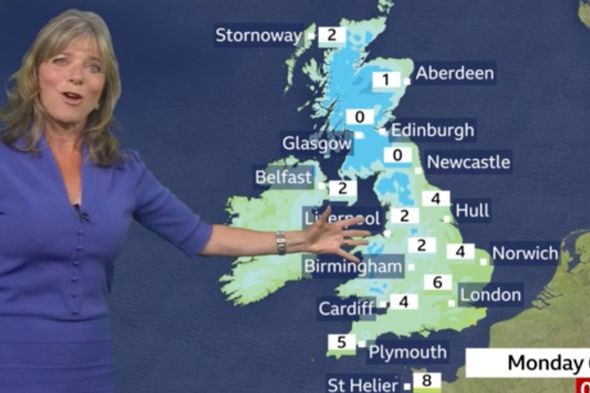 Ms Lear added: “A colder story and it’s here to stay for some time. As we move through Sunday evening, the front clears away, the sky is clear and so temperatures are likely to fall away quite sharply.

“We have a few scattered showers but they should start to ease but a widespread frost is likely across northern and western areas. Gardeners and growers, take note, that’s not really what we need May 10.

“It’s a chilly start to our Monday, it should be a relatively dry and sunny one, those brisk northeasterly winds driving in a few showers off the north coast.

“We may see a more organised shower just filtering across the north of Scotland. But generally speaking, it’s a quiet story over the next few days.”

Met Office forecaster Marco Petagna said of the weather this week: “It’s from summer back to winter in 48 hours. Massive temperature changes are forecast.”