BBC Weather forecaster Matt Taylor warned thundery showers and strong gales will hit the country on Tuesday and Wednesday, with temperatures dropping down to 16C for the first part of the week. The weather forecaster claimed the mercury will begin to soar again from Wednesday, reaching highs of 35C on Friday for southern parts of the country. He said: “It’s a cool start to the week, temperatures by this afternoon down a little bit from where they should be this time of the year, around 16C to 21C or 22C at the highest.

“Watch the turnaround though by the end of the week, because a surge of heat is back for some of you, particularly across parts of Wales and England.

“In the south-east corner we could see 34C, maybe 35C once again.

“And the warmth will push a little bit further north but not to the same extent.”

But for this week, he added thunderstorms and strong gales are expected to batter the UK before the heat and the sunshine come back.

He said: “On Tuesday, low pressure will bring some wet and windy weather too, with gales developing across Norther Ireland and wester areas.

“Persistent rain across western areas of Scotland, not just through Tuesday but into Wednesday. 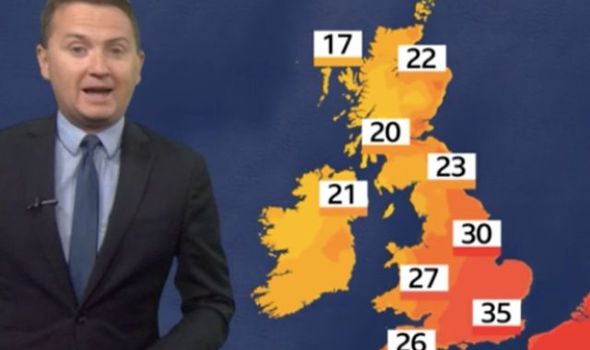 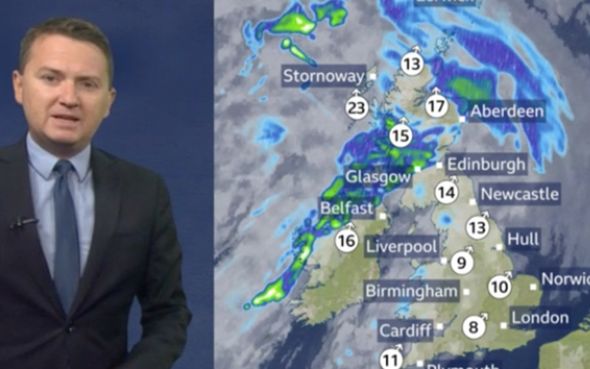 “The rain remains through Tuesday night into Wednesday for Scotland and Northern Ireland though the night, but as we go through to Wednesday day tines what we will see is an area of heavy rain pushing its way in through Wales into the western part of England.”

Netweather forecast Terry Scholey said: “By Friday though temperatures should be rising again, with another taste of high summer weather in the offering.”

And according to the Met Office, the heat is not going anywhere for a while.

In its long range forecast from August 6 to August 15, the Met Office very warm weather is on the cards.

It said: “There are increasing signs that many parts will become drier, brighter and very warm towards the end of next week with the possibility of hot conditions developing again in southeastern areas.

“However, northwestern parts will probably stay more unsettled with further rain at times.

“Somewhat cooler conditions may follow from the west over the weekend, perhaps preceded by showers or thunderstorms.

“For the following week, a fair amount of dry, bright warm weather looks likely for much of the UK with the possibility of some further very warm weather, especially in the southeast.

“There may well be more changeable, breezy interludes with some rain or showers, more especially for northwestern areas where temperatures will be generally nearer normal.”

However, from Sunday, August 16, the weather is expected to become wetter and windier. 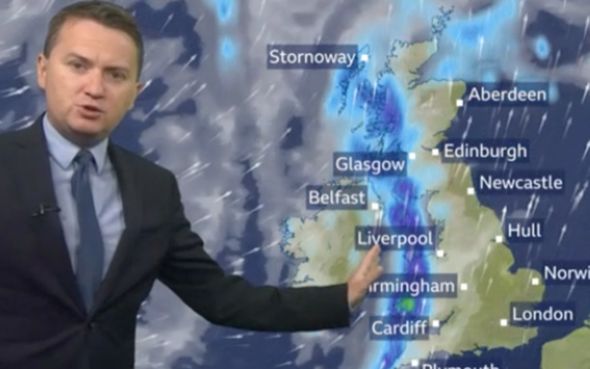 In its forecast from August 16 to August 30, the forecast said: “This period is likely to see a mixture of dry and settled conditions, interspersed with occasional bouts of wetter and windier weather.

“The majority of the unsettled weather seems more likely to be in the northwest, with the south and southeast seeing the driest conditions.”

However, the Met Office noted temperatures will still be high.

The forecaster added: “Temperatures will probably be around or slightly above the average for this time of year.

“There may be further short lived very warm spells, these more likely across the south or southeast.

“There are some tentative signs that conditions could become more widely dry and settled across the UK towards the end of the month.”

Tags: bbc, ctp_video, headlines, nation
You may also like
Recent News:
This website uses cookies to improve your user experience and to provide you with advertisements that are relevant to your interests. By continuing to browse the site you are agreeing to our use of cookies.Ok