BBC Weather meteorologist Carol Kirkwood said Tuesday will be on the cold side as the UK experienced a massive temperature dive compared to the balmy 25C experienced by many at the weekend. Ms Kirkwood warned parts of Scotland and northern England will be in for a frosty start but reassured sunny spells are to be very much in control for the rest of the day. The BBC forecaster said: “It’s a cold start of the day today, temperatures currently across parts of southern Scotland and northeast England roundabout -5C,-6C so there’s some frost.

“Quite a bit of frost actually in many parts of the UK but for most of us, it is going to be a sunny day.

“As ever there are some exceptions. High pressure dominating the weather so everything is moving in a clockwise direction.

“We’ve got more cloud towards the southeast and also the north of Scotland – here too it is pretty breezy, with some spots of rain on and off through the day, especially across Shetland.”

Temperature-wise, most Britons will see thermometers shed between eleven and seventeen degrees. 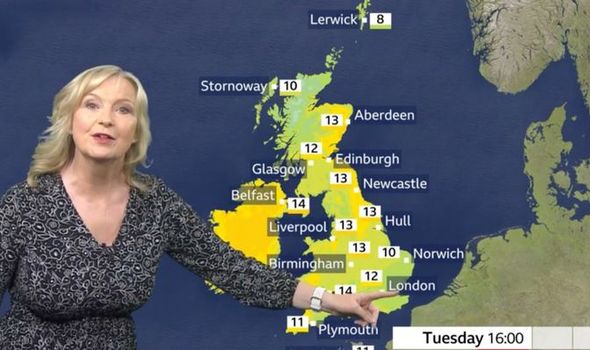 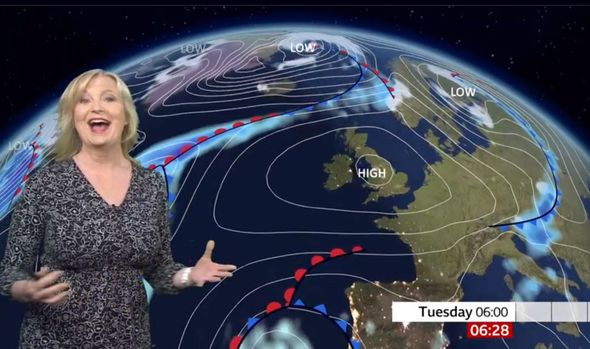 Ms Kirkwood continued: “The cloud we have in the southeast quadrant of England this morning will tend to break up through the course of the day and we’ll see some sunshine coming through.

“The sunshine hazy across southern Scotland, northern England and Northern Ireland. Some go that high clouds slipping down into Wales and the Midlands through the afternoon.

“Temperatures today ranging generally from 8C in the north to 14C in the south but somewhere in northeast Scotland could have around 16C and along this southeast coastline, it will feel cool.

“Again, if you’re taking your permitted exercise here today, do wrap up warmly.”

READ MORE: How long have we got before huge 15C temperature drop ends UK heatwave 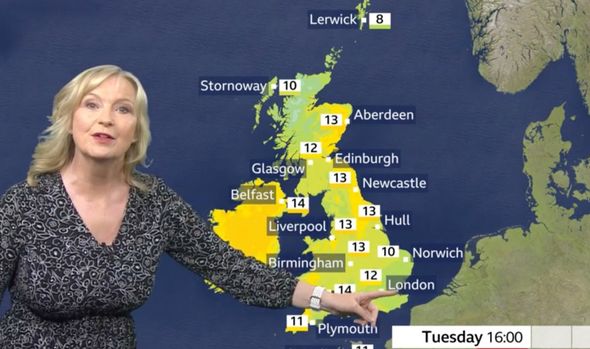 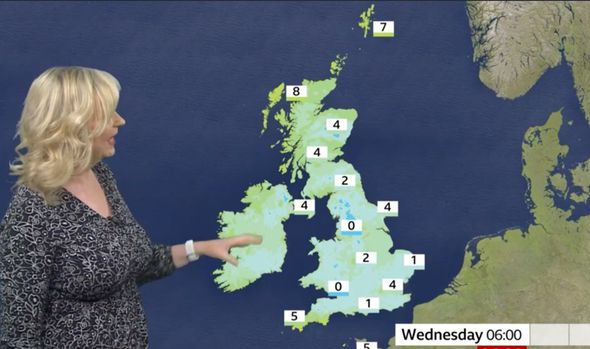 The BBC Weather forecaster warned temperatures will near freezing overnight thanks to the clear skies expected to stay on across most of the UK.

But on Wednesday, thermometers will start picking up once again to hit the high teens in most of the country.

Ms Kirkwood added: “Through this evening and overnight we still have our cloud in the north, still windy here as well.

“Clear skies for much of the rest of the Uk means it’s going to be another cold night. 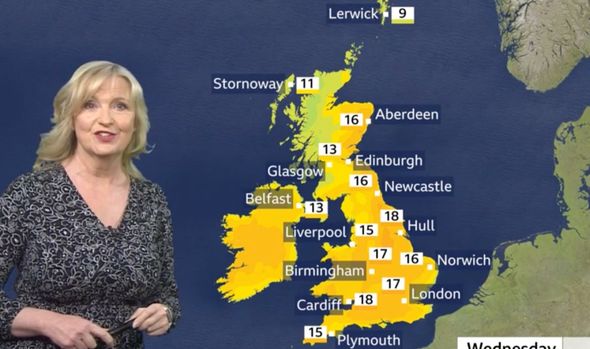 “Some patches of mist and fog forming across Northern Ireland and southern Scotland.

“These are the temperatures – many are around freezing or not too far off except in the far west under the cloud and also where we’ve got the breeze.

“This cloud will stick tomorrow, still quite breezy, in the southwest we lose the mist and fog while we’re in for another dry day and sunny day for most of us as well.

“And that’s reflected in the temperatures. We’re looking at about 17C or 18C, 11C under the cloud into the northwest.”