BBC weather: Cloudy and with drizzle and outbreaks of sunshine

BBC Weather forecaster Carol Kirkwood has predicted gusty winds in Eastern areas of Scotland. And outbreaks of heavy rain in the North-West and Scotland due to built-up high pressure. Ms Krikwood warned Britons of high pollen count for most of the country and the forecast predicted outbreaks of sunshine as we head into the weekend.

Ms Kirkwood said: “It’s not a cold start to the day temperatures rising 12 to 16 degrees it’s already 16C in Balitor and also in Swansea.

“But we have had some rain, heavy rain at the moment pushing into the North Sea, and some more heavy rain coming in across the North-West of Scotland and quite a lot of cloud.

“High pressures building in from the South-West, we’ve got fronts moving across the top of it and look at those isobars across Scotland Northern Ireland and Northern England.

“Gusty winds for you today, particularly to the East of the Pennines and Eastern Scotland. 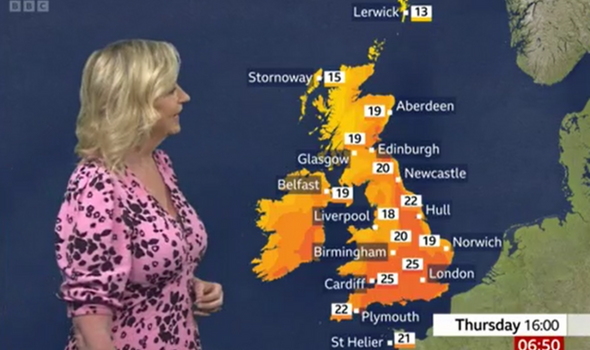 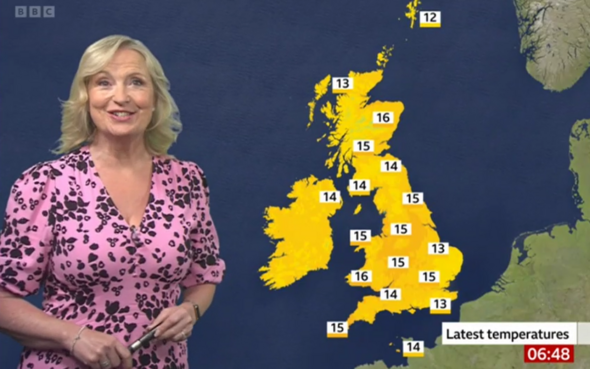 Ms Kirkwood added: “So a fairly cloudy start, we’ve got the rain continuing across Western Scotland, some drizzle, especially in the coast and hills around the North-West of England and Northern Ireland.

“But the cloud breaking as we go through the course of the day, across Southern England and also Wales allowing some sunshine to come through.

“And temperatures climbing to about 13 in the North to 25 in the South.

“Another thing is pollen levels today are going to be high, or very high for most of us.

“Through the day we’ll see the cloud thin and break and some sunny spells developing.

“Warmer than it was yesterday with temperatures up to 24 and just light North-West breezes.

“So through this evening and overnight, this is a weather front that’s moving South, taking its cloud and the odd spot of drizzle. 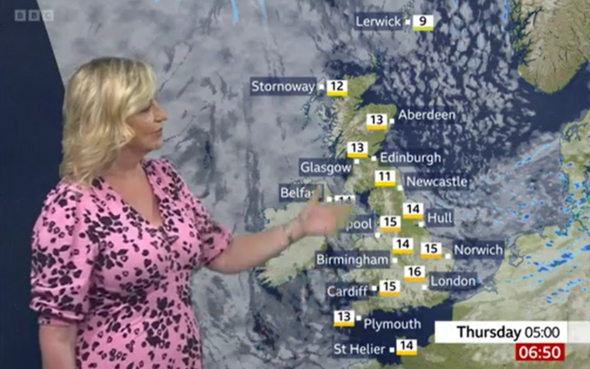 Ms Krikwood added: “Clearer skies following on behind and it’s going to be muggy in Southern England.

“Overnight lows 16 degrees but generally we’re looking at 9 to about 15.

“Breezy down this North Sea coastline and that will be a feature of the weather tomorrow and it’s a… Breeze.

“So that will take the edge off the temperatures, meanwhile we start off on a cloudy note across England and Wales.