The UK will experience a sizzling 25C scorcher today on Easter Sunday – but the latest BBC weather forecast has warned that this warm air will also unleash “intense thunderstorms”. The BBC meteorologist Sarah Keith-Lucas said that there is a “mixed picture of weather” for Easter Sunday, warning that the heatwave will be brought to an end by heavy showers later today. This comes as the Government continues to urge Britons to stay indoors as part of the UK coronavirus lockdown measures.

Keith-Lucas told BBC Breakfast viewers: “Throughout today there will be a real change to the feel of the weather.

“We have colder air moving in from the North, but it will still be a warm day to come for the southern parts of the British Isles.

“We will also see some heavy showers later on and there could also be some rumbles of thunder as well.

“We have had a lot of warm, settled weather recently due to the area of high pressure that is now pushing off towards the south-east.”

JUST IN: Coronavirus crackdown: Police fine over 1,000 for breaking rules 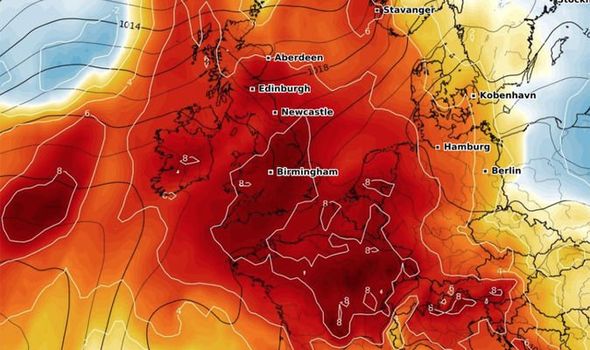 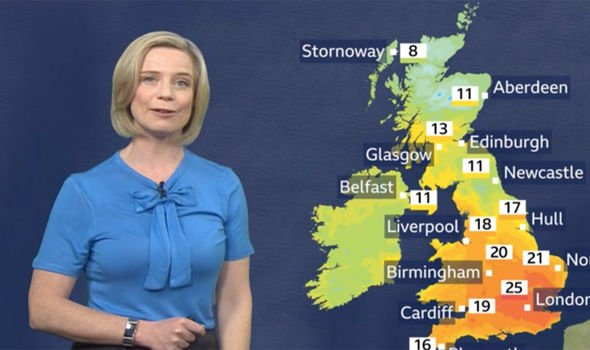 The BBC meteorologist suggested that some regions of the country could experience a dramatic 15C drop in temperatures between Easter Sunday and Easter Monday.

She explained: “We now have low pressure sitting across Scandinavia and that means we are drawing in this colder, northernly airflow.

“It is pushing down today and we will have that cold air mass more widely across the country by tomorrow on Easter Monday.

“Temperatures in Aberdeen today will only reach about 11C but down towards London you will likely see 25C – very similar to what we’ve had over the past couple days. 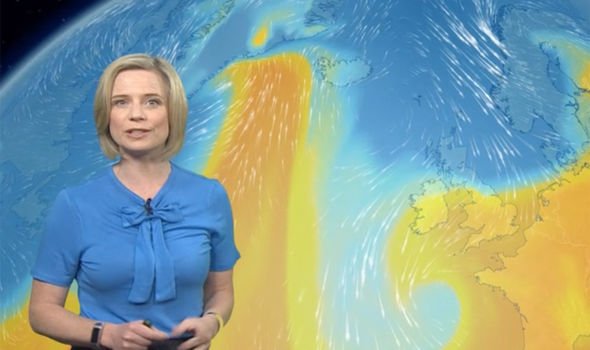 “But with that heat, you will also see some heavy showers across parts of England Wales, the Midlands particularly, into East Anglia as well.

“You could catch a shower as we move into tonight, could be heavy, could be thundery as well.”

She told viewers that overnight tonight will be “cold,” as people wake up to a “touch of frost first thing on Easter Monday”. 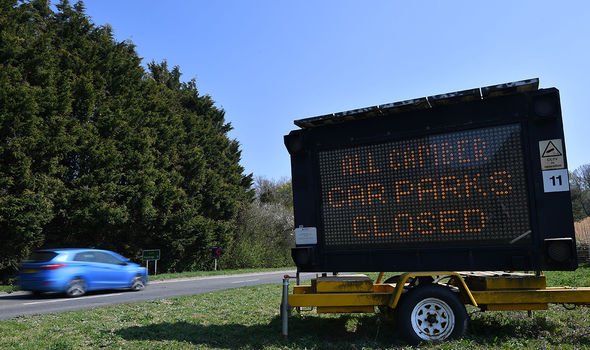 Keith-Lucas added: “Tomorrow will be much colder day across the board. We have a brisk, northerly wind, some places reaching up to 50mph.

“Temperatures will range between 7C and 14C as the east coast bares the brunt of the cold front.”

This comes as police officers from 37 forces in England and Wales confirmed that they have issued 1,084 fines for breaches of coronavirus regulations up until Thursday.

Ministers are urging people to stay at home over the Easter weekend to curb the spread of the virus, despite sunny weather across parts of the UK.

The police claimed that only a “small minority of people” have failed to follow the guidance so far, with the overwhelming majority of people staying in.

Tags: autoplay_video, bbc weather, met
You may also like
Recent News:
This website uses cookies to improve your user experience and to provide you with advertisements that are relevant to your interests. By continuing to browse the site you are agreeing to our use of cookies.Ok