BBC Weather forecaster Chris Fawkes said as we go through the week central Europe will see thunderstorms. As the heatwave rages on in Europe, more rain and heavy downpours can be expected. He added these heavy downpours could result in localised flooding.

Mr Fawkes said: “The heatwave is set to continue for much of this week across north-west Europe.

“Temperatures will be running into the mid-highs 30s widely.

“But widely we are starting to see some thunderstorms break out in that heat and humidity.

“Really that is the nature of the forecast through the rest of the week.”

DON’T MISS: Up to 6INCHES of rain to fall in 4 hours as thunderstorms hit 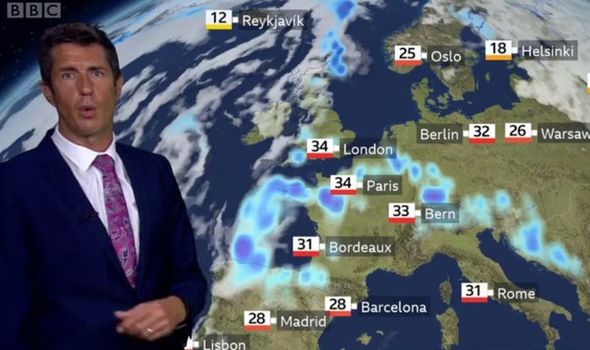 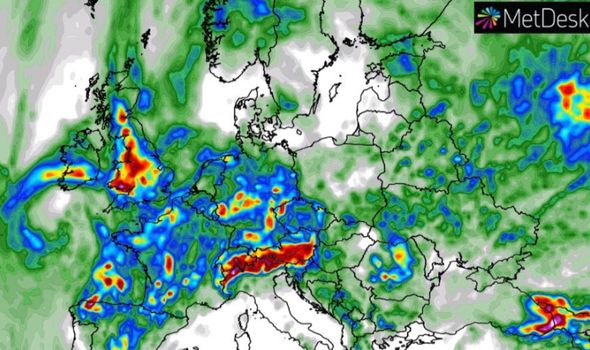 Mr Fawkes went into detail of these thunderstorms and where they would likely occur in Europe.

He said: “It is hot and humid, some sunshine but with some big thundery downpours.

“Those storms are back again across parts of France and perhaps a few developing across the United Kingdom.

“Some of them could be heavy enough to bring some localised flash flooding.” 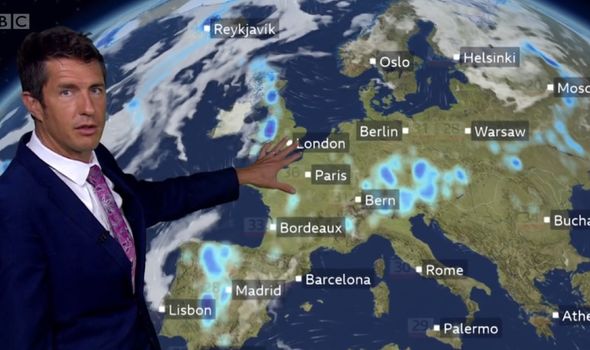 In southern eastern Europe it is expected to remain dry with few areas experiencing any rain over the next few days.

The BBC Weather forecaster said: “In south-east Europe it is a dry picture with plenty of sunshine here as well.

“Temperatures will be running into the low to mid-30s.

“Heavy showers will develop across parts of central Europe to watch out for Tuesday as well.

“Otherwise you can see the extent of the hot weather, 34C in Frankfurt and 31 in Berlin. 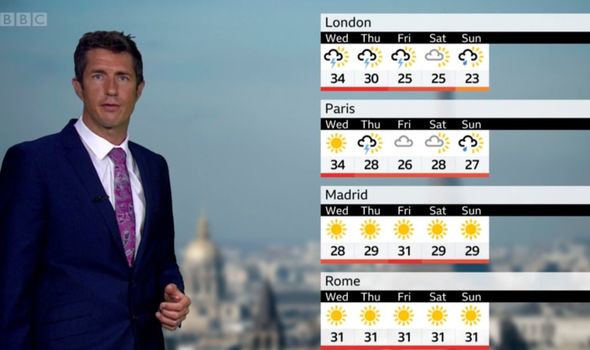 “Some areas will see temperatures into the high 30s.”

The areas most likely to see the hottest of the European heatwave weather are north France, Belgium, Netherlands and Germany.

As we move through the week, the showers will become more frequent for countries in central and western Europe.

Mr Fawkes said: “On Wednesday it is another day of sunshine and showers.

“The showers become a little more widespread in nature.

“As I say, there is a risk that some of these heavy storms could bring some localised flash flooding.”

Tags: bbc, BBC We, ctp_video, headlines
You may also like
Recent News: