Parts of Europe, including the south-east and the Mediterranean, will enjoy a heatwave over the next week. Temperatures across Greece, Cyprus and southern Italy will soar past 30C, according to the BBC forecast. This comes as British tourists flock to Portugal as the main destination on the UK’s green list of countries that are free of the quarantine requirement.

Spain has said it is officially lifting restrictions for UK travellers from Monday – but the UK government still strongly advises against non-essential travel to Spain.

BBC meteorologist Louise Lear said that it is a “pretty disappointing May story to tell” for the bulk of Europe.

However, she added: “The south-east and the Mediterranean are faring quite well for the next few days with some sunshine and some warmth. The same too for southern Italy.”

Temperatures in Athens will soar to 32C by Monday, while Madrid will near 30C by next Friday. 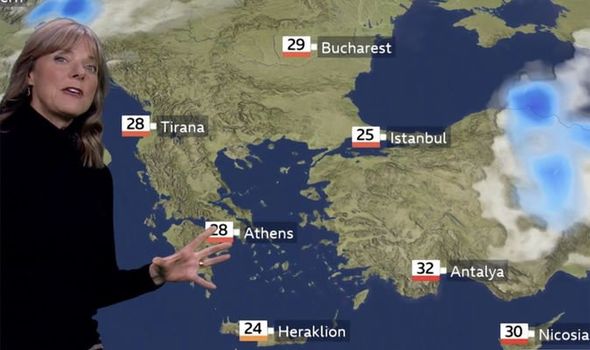 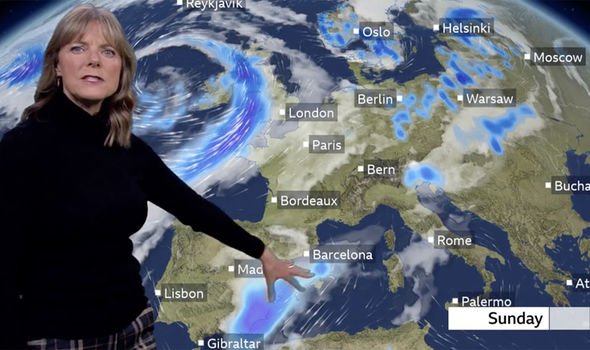 Ms Lear continued: “For the rest of Europe, it is cool and it is rather unsettled for the time of year.

“Satellite footage shows bands of cloud slicing through the heart of Europe and that is producing some heavy rain.

“And there is more to come waiting in the wings to push into the UK on the second half of Sunday.

“There is heavy rain into Spain, moving out the Alps, across to Central Europe and Poland, with some strong winds accompanying it as well. 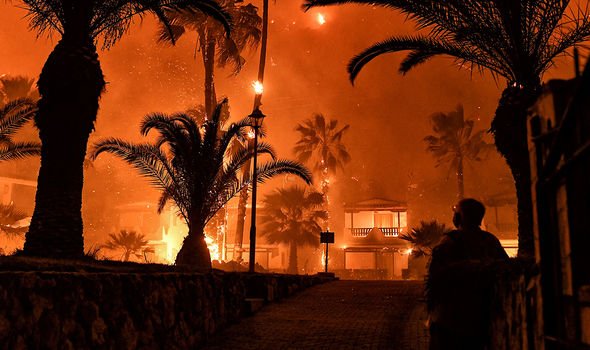 “There is quite a lot of cloud and a disappointing feel to things across France. Wet weather will be pushing into the UK over the next week with plenty of showers.

“That frontal system will push itself into France, Germany and the Low Countries on Monday, at the same time we will see some heavy rain push its way out of the Alps and down into northern Italy.

“It is cool, it is showery, and it will stay like that for many for a few days.

“There are signs of some improvement from Wednesday onwards, getting drier and warmer as we head towards next weekend.” 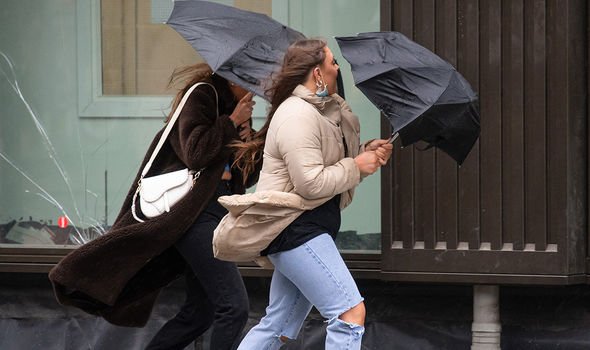 However, the hot weather in Greece has also sparked the first forest fire of the season, as the blaze nears the capital Athens.

More than 270 firefighters have been deployed to fight the fire on the Geraneia mountain range, described by authorities as “one of the biggest” in decades.

Meanwhile, in the UK, some parts of the country are facing the wettest May on record, although June is shaping up to be drier.

This weekend marks the first Saturday and Sunday that large groups of people can meet up outdoors in England.