The latest BBC weather forecast shows temperatures continuing to plunge in the run-up to Christmas Day. BBC meteorologist Matt Taylor warned that those travelling on the Wednesday before Christmas Day could major disruption due to an area of low pressure. He added that this weekend will see heavy showers, thunder and hailstorms sweep across the UK.

Mr Taylor said: “There are flood warnings in parts of Wales and western England this morning but the good news is that the more persistent rain is on its way out.

“For the rest of the weekend, there will be some sunshine around, some dry weather, but it will be punctuated every now and again with rain in the form of short-lived but heavy showers .

“In the satellite imagery, the view from space, you can see the speckled nature of that weather front moving in.

“For the next few hours, we have some persistent rain over eastern England but that will clear by mid-morning.”

JUST IN: Cold weather forecast: UK braces for 25 inches of snow after Christmas 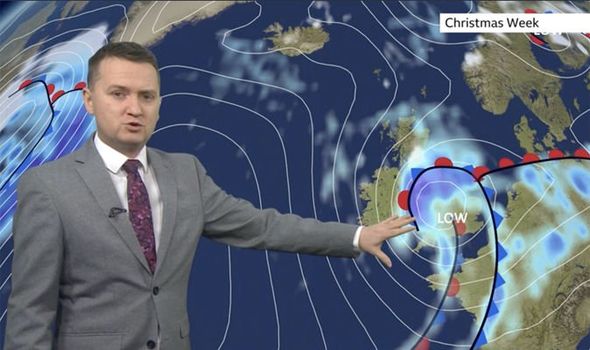 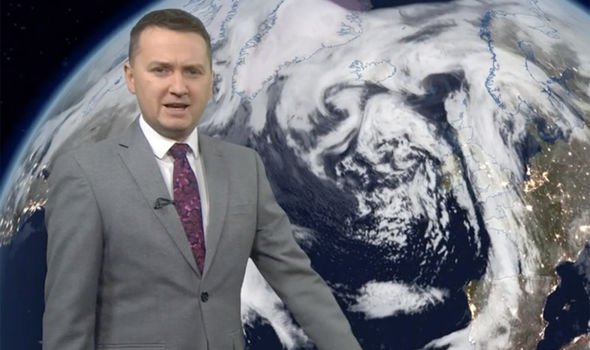 He continued: “We have a few lighter showers pushing into some eastern areas but the showers are more frequent in the western regions today.

“Where you do see the showers, they could be heavy and thundery. They may even have hail mixed in.

“There will be gusty winds with those heavy showers, with winds reaching up to 50mph.

“Overall it will be a cooler nigher tonight than we have seen in the past few nights, as temperatures drop to around 3C to 4C.

BBC Breakfast: Naga jokes about the weather with Nick Miller 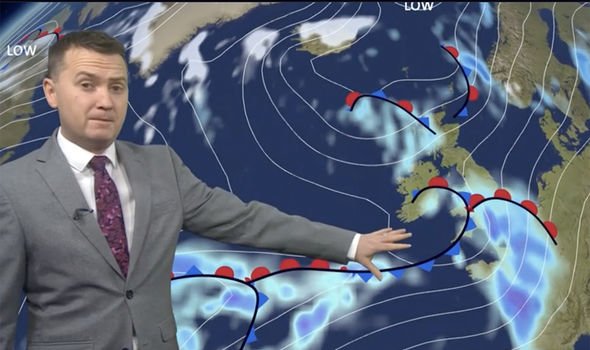 “It will be another mixture of showers and sunshine again tomorrow, as temperatures continue to drop down again.

“As we enter Christmas week, Monday will see temperatures down again to around 5C.

“Once we have lost that area of low pressure, Tuesday is reasonably quiet.

“But if you do have Christmas travel plans on Wednesday keep an eye on the forecast. There is a potential for quite a nasty area of low pressure that could cause travel disruption.

“On Christmas Eve and Christmas Day, it will feel colder, there will be crisp, frosty mornings, a little bit of sunshine, but I can promise any snow.” 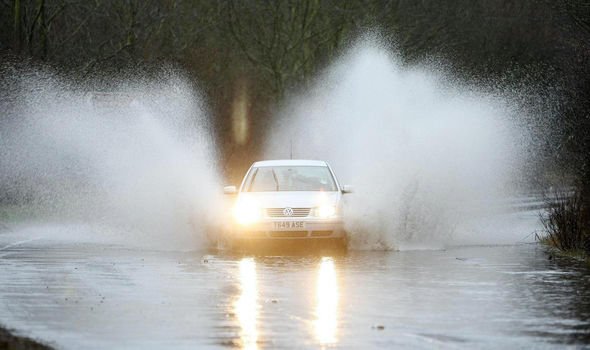 On Friday Britain was swamped with flood warnings after four inches of rain and 60mph winds hit the country.

The Met Office issued amber ‘be prepared’ rain warning for South Wales after a major river burst its banks.

The River Towy bursts its banks in Carmarthenshire as Wales bore the brunt of the severe weather.

Experts warned that “fast flowing or deep floodwater is likely, causing danger to life” and communities could be cut off

Tags: bbc brea, bbc weather, ctp_video
You may also like
Recent News:
This website uses cookies to improve your user experience and to provide you with advertisements that are relevant to your interests. By continuing to browse the site you are agreeing to our use of cookies.Ok