BBC meteorologist Louise Lear said rain was threatening Britain, with around an inch in parts of Northern Ireland. She warned BBC Breakfast viewers there was sure to be more across Scotland as the weather front moves eastwards.

Ms Lear said: “It does look as if that rain will continue to clear, and we’ll see sunny spells and scattered showers into the afternoon.

“Most of the showers this afternoon will be more heavy, more frequent across Scotland, Northern Ireland and northern England.

“Further south, they should be few and far between.

“But there’s going to be a noticeable wind, a strong westerly with gusts in excess of 30mph quite widely.” 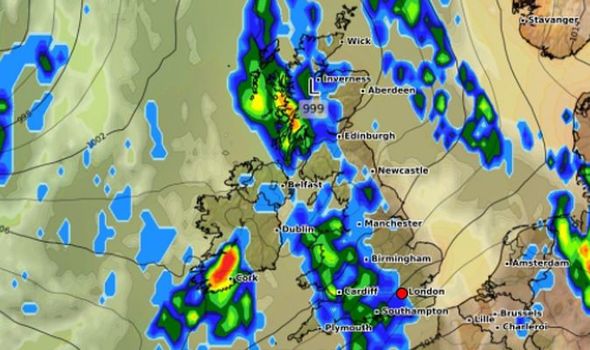 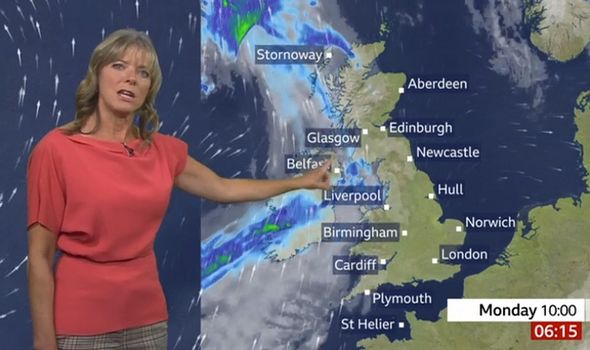 She continued: “Temperatures will peak perhaps at around 22 degrees if we get the sunshine.

“They may be a degree or so down in the far north of Scotland, 14 to 18 degrees.

“Now through the evening, the showers should start to fade away, and actually overnight we keep those clear skies.

“It’s quite a mild start first thing in the morning at the moment.” 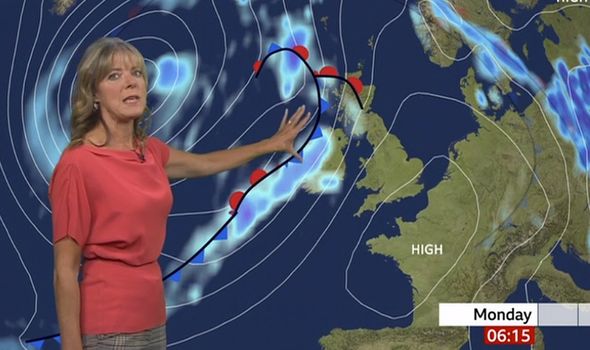 The weather presenter added: “Tomorrow, we’ll largely see those fall away into single figures, maybe about five or six degrees in some rural parts of Scotland.

“So it’s going to be a slightly fresher start to the day.

“But we are starting to see the influence of this high pressure across England and Wales.” 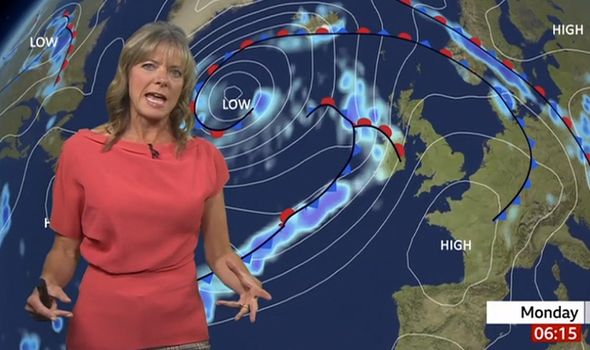 “So that’s going to spoil the story if you don’t want rain on Monday.

“For Northern Ireland and western Scotland, it will cloud over and when the rain arrives, it will gradually drift its way eastwards.

“It won’t be particularly heavy to start with but then really starting to pep up into Scotland as we go through the afternoon.

“For England and Wales, there’ll be a little more cloud along the west, but temperatures peaking at 22 degrees.”