BBC Weather: UK to be hit by snow as temperatures drop

BBC Weather forecaster Matt Taylor said Britons will get some respite after days of relentless heavy rain triggered a swathe of flood warnings across England, Wales and Scotland. But the break is expected not to last long as a further system of snow moves in from Ireland during the weekend. Mr Taylor also warned breeze will remain a key feature in the next few days, helping plunge temperatures to as low as -8C in some areas.

Mr Taylor said: “Lots of sunshine though frosty start, icy start for many across the west. For some of you, not a bad day at all.

“Central and eastern areas staying dry and bright. Further rain, sleet, and snow flurries give a covering in places in Scotland, a few more into Northern Ireland.

“Rain showers, which will push into the south of Wales, southwest England could come with some sleet and snow over the hills and even the odd rumble of thunder.

“Bit of a breeze blowing today, especially into the northeast of the country and that will make you feel substantially colder.”

JUST IN: London snow map: London to be hit with ‘heavy snow’ in DAYS as winter storm continues 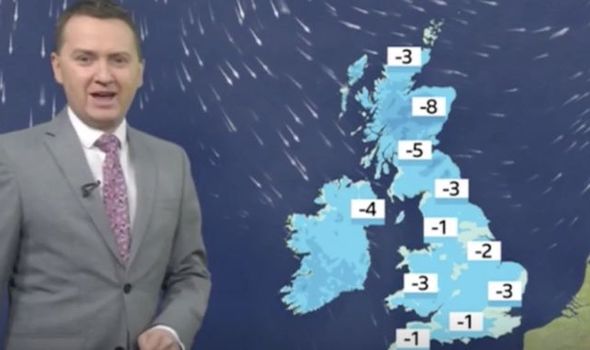 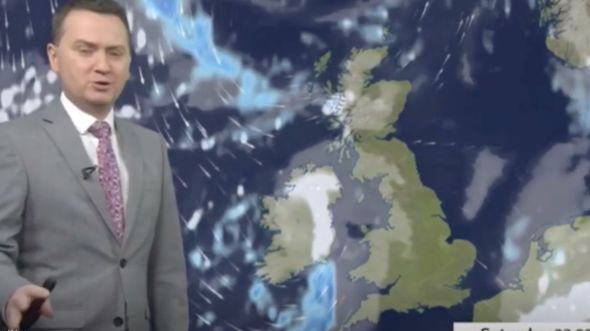 A yellow ice and snow warning is due to remain in place across most of the west coast of the UK through Friday, while one severe flood warning continues to be in place for the River Dee at Farndon.

The BBC Weather forecaster continued: “We see showers towards the end of the day into the southwest through parts of Wales, the Midlands. It will push its way across other southern counties through the evening.

“But it’s the sleet and snow showers across parts of northern England, north Wales, Northern Ireland and western Scotland that could give a covering of snow again into tomorrow morning.

“Clear skies elsewhere and a much colder night to come, maybe as slow as -8C – -9C across some parts of eastern Scotland, potentially a little lower as well.”

UK weather: Map shows parts of Britain to be hit by heavy snow 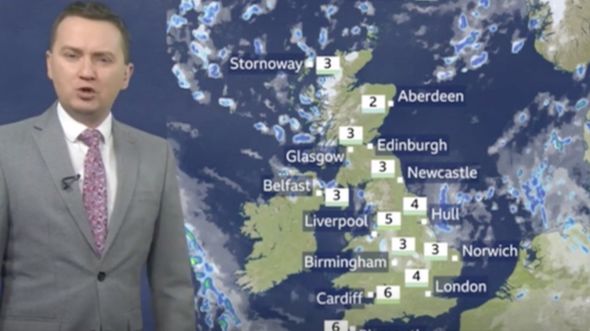 Mr Taylor continued: “Into Saturday, just got to watch for an area of rain close to the Channel Islands and the south coast of England. Other than that, the showers again into Scotland, Northern Ireland, parts of northwest England, north Wales and through the Midlands.

“Slight dusting of snow possible for one or two, most of you will spend the day dry. Even colder tomorrow, with temperatures only 2C or 3C for many.

“And with that cold air in place, we have to watch out for what starts to form just to the southwest of our low-pressure system.

“This feature, as it works its way in, the timing of that could be crucial to who sees snow, and who sees how much snow. 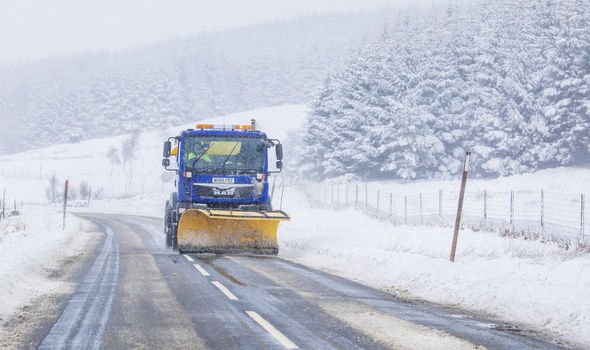 “It’s going to move through Ireland through Saturday night into Sunday. Then through Sunday, looks like we could see a few centimetres of snow here and there across England and Wales.”

According to the latest maps from WXCharts, at 6am on Sunday the whole of Wales is covered by a 100 percent snow risk, with much of the West Country also forecast for snow.

The wintry conditions continue to move further east on Sunday, with much of England covered by a high snow risk at 12pm.

By 6pm the south-east turns red, indicating over an 80 percent risk of snow.

Parts of West Scotland, Wales and the West of England are also covered by a moderate to high snow risk, according to the charts.