The measurement, taken in Altnaharra in the Scottish Highlands, made it the coldest day in the UK since December 2, 2010. Meanwhile, Public Health England has issued an icy weather alert for the whole nation for today. And the Met Office says temperatures will finally lift above freezing at the weekend.

A forecaster said of today: “Strong easterly winds will continue to make it feel bitterly cold across much of the UK, with further snow showers feeding westwards.”

National Rail told passengers to check before travelling. The AA said there had been “numerous” accidents. 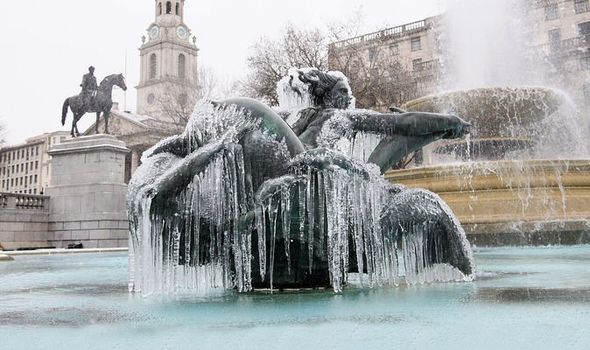 But some people had fun, with brave swimmers in Thorpe End, Essex, making snow angels.

Brody Penny, 11, and his parents crafted an F1 car out of snow in Old Rayne, Aberdeenshire.

And Bamburgh Castle in Northumberland was the backdrop for a Crompton family snowball fight.

Picture postcard scenes were also provided by icy Trafalgar Square fountains, the woods at Larbert, near Falkirk, and the Paradise Wildlife Park, Herts.