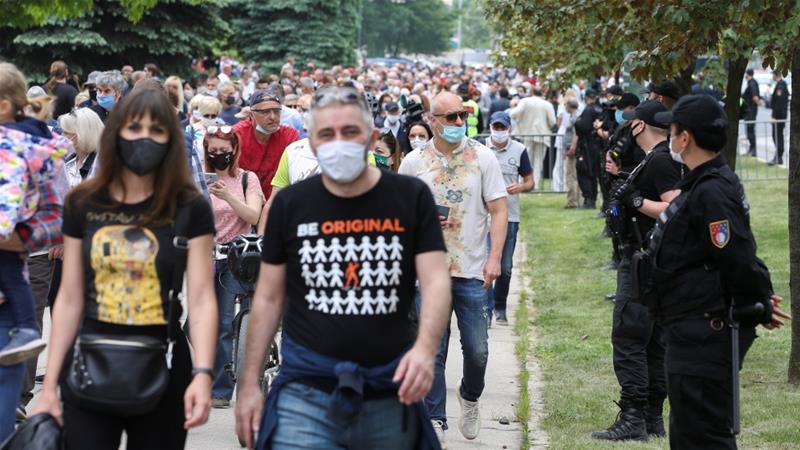 Thousands of Bosnians, many wearing masks, demonstrated on Saturday against a mass in Sarajevo for Croatia’s Nazi-allied soldiers and civilians killed by partisan forces at the end of World War II.

The mass was a replacement for a controversial annual gathering usually held in Bleiburg, Austria, which was cancelled due to restrictions imposed by the coronavirus pandemic.

Another small replacement event took place Saturday at a cemetery in Zagreb, Croatia.

The decision to hold the mass in Sarajevo provoked a strong backlash in a country where the memory of ethnic war in the 1990s is still fresh.

It was condemned by Bosnia’s Serbian Orthodox Church, the Jewish and Muslim communities and several anti-fascist organisations.

Protesters, many wearing masks, walked through the city singing anti-fascists songs and holding up photos of resistance members who were tortured and killed by Nazi-allied Croatian forces during their rule over Sarajevo during World War II.

“My two grandfathers, their brothers and my grandmother were all killed by these fascists who have been honoured today,” said retired electro-technician Cedomir Jaksic, 63.

“It is not normal that a city such as Sarajevo, which was terrorised so much in both World War II and the last war (in the 1990s), allows something like this to happen,” he added.

Zvonimir Nikolic, a 57-year-old economist, called the mass a “disaster for Sarajevo.”

“Sarajevo is among a few cities in the world where this mass should never be held because the regime it commemorates committed monstrous crimes in Sarajevo,” said Nikolic, who is Catholic.

For Croatian nationalists, the annual event symbolises their suffering under communism in the former Yugoslavia.

However, in recent years, Croatia has increasingly been criticised for historical revisionism. The annual mass in Bleiburg, as well as the one in Sarajevo on Saturday, was held with the support of Croatian parliamentarians.

In his sermon, Puljic asked for more information on how the people had died and where they were buried, as well as for respect and forgiveness for all victims of World War II. Smaller memorials were also held in Zagreb and Bleiburg.

The speaker of the Croatian parliament, Gordan Jandrokovic, said during a brief commemoration in Zagreb that they aimed to commemorate innocent victims and did not plan to rehabilitate the Ustasa.

Dunja Mijatovic, the Council of Europe Commissioner for Human Rights, said the mass “risks becoming a glorification of those who supported the Nazi-allied fascist Ustasa regime, complicit in the death of hundreds of thousands of human beings”.

Tags: Bosnia, Cro, EUROPE, World War
You may also like
Recent News:
This website uses cookies to improve your user experience and to provide you with advertisements that are relevant to your interests. By continuing to browse the site you are agreeing to our use of cookies.Ok