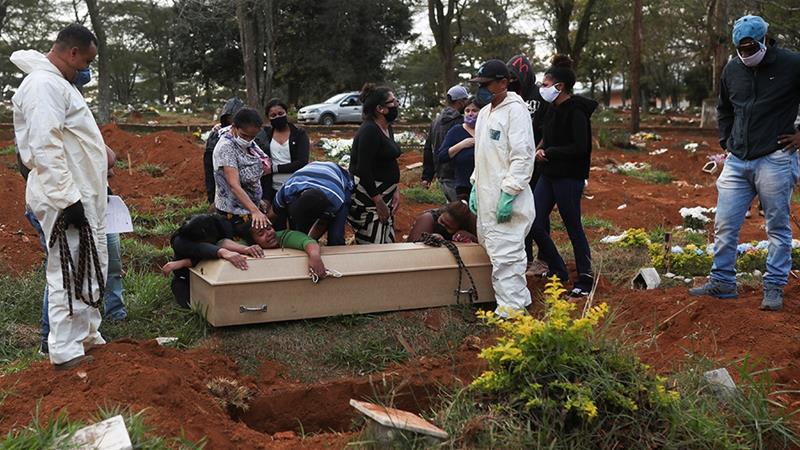 Brazil has recorded more than 1,000 new deaths from the coronavirus in the past 24 hours.

Brazil is the second most affected country after the United States, which has 1,698,581 cases and 100,276 deaths, according to US-based Johns Hopkins University.

Despite being one of the hardest-hit states, Sao Paulo, the biggest hotspot for cases in Brazil, will begin to gradually reactivate its economy on Monday.

Sao Paulo Governor Joao Doria announced on Wednesday that the state will enter a new phase of quarantine as of June 1.

“We will maintain the quarantine until June 15, but with the resumption of some economic activities,” Doria said at a news conference.

According to Doria, economic activities will return gradually and will depend on a sustained decrease in cases and on the availability of ICU beds.

Contrary to what President Jair Bolsonaro has said, Sao Paulo authorities have stressed that without the quarantines adopted, the number of victims would be much higher.

Coronavirus among the Indigenous

Meanwhile, Brazil’s Xingu area, one of the biggest reserves in the world, registered its first two COVID-19 deaths this week.

The two fatalities were in the Kayapo Indigenous group, which has reported a total of 22 virus cases. The community’s leader, Megaron Txucarramae, told The Associated Press he wants Bolsonaro and other officials to stop loggers, miners and fishermen from illegally entering the territory, incursions he believes have accelerated the spread of the virus.

Bolsonaro has encouraged development in the Amazon, regardless of Indigenous lands, although the state-run indigenous agency, FUNAI, issued an order in mid-March barring access to those lands because of the virus.

Still, reports in Brazilian media have said missionaries, healthcare agents, loggers and miners carried the virus into those areas.

“It is not us that are leaving and taking [the virus]. There are people seizing this disease to invade Indigenous land,” Txucarramae said.

While the government lists 40 coronavirus deaths of indigenous people inside the reserves, activists say about 150 in all have died in Brazil, including in cities. The toll is likely higher, because hospitals often do not use patients’ Indigenous names when admitting them.

Bolsonaro contends there has been an overreaction to the coronavirus and argues against lockdowns ordered by local officials, saying the economic disruptions from the crisis will kill more than the virus.

Tags: BRAZIL, Coronavirus pandemic
You may also like
Recent News:
This website uses cookies to improve your user experience and to provide you with advertisements that are relevant to your interests. By continuing to browse the site you are agreeing to our use of cookies.Ok