The far-right leader is also facing a political crisis that has triggered calls for his impeachment. 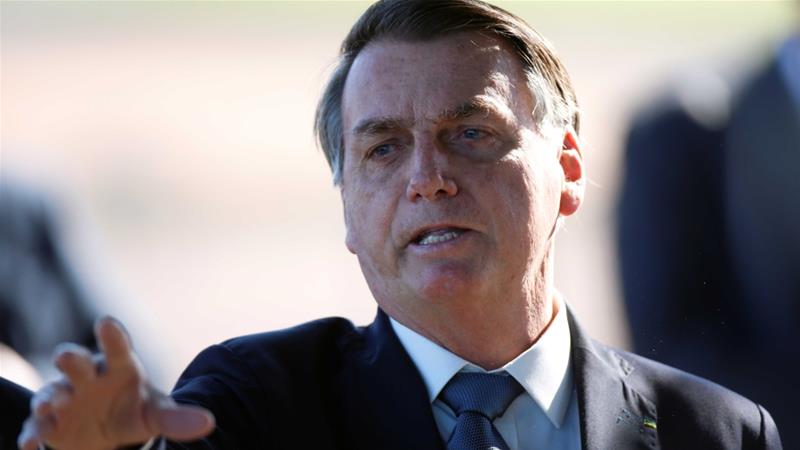 Waving and pumping his fists, Brazilian President Jair Bolosonaro cheered hundreds of his far-right supporters outside the presidential palace on Sunday, who called for the return of military rule in the country and an end to the quarantine measures imposed to stem the spread of the novel coronavirus.

“This is a spontaneous demonstration,” he said in a Facebook livestream that lasted more than an hour.

“The people are with us, the armed forces who are in line with the law, order, democracy and freedom are also on our side,” he said, amid the sound of a bullhorn and the loud roar of protesters huddled together, many not wearing masks, while cheering and waving large Brazilian flags.

Following the comments, the Defence Ministry put out a rare statement countering Bolsonaro’s claim, saying that the armed forces were on the side of democracy, the separation of powers and of Brazil’s constitution.

This latest fracture comes as Bolsonaro faces widespread criticism over his handling of the coronavirus pandemic, and amid a political crisis that has triggered calls for his impeachment. Analysts say that while the former army captain still maintains enough support to heed off the impeachment threat, he is treading lightly and continues to risk further isolation.

Bolsonaro, who has referred to the coronavirus as the “little flu” and interacted with supporters without a face mask, has argued that the economic fallout of lockdown measures would be deadlier than the virus itself.

He has also actively encouraged people to defy social distancing measures put in place by state governors, calling on people to return to work and take part in large gatherings, even after the number of COVID-19 cases in the country surpassed 100,000, with more than 7,900 deaths.

“Bolsonaro made the decision that he would argue that the economic cost would be larger than the healthcare cost, which given what the pandemic has shown around the world, is not necessarily true,” said Filipe Carvalho, a Brazil analyst with the Eurasia Group. 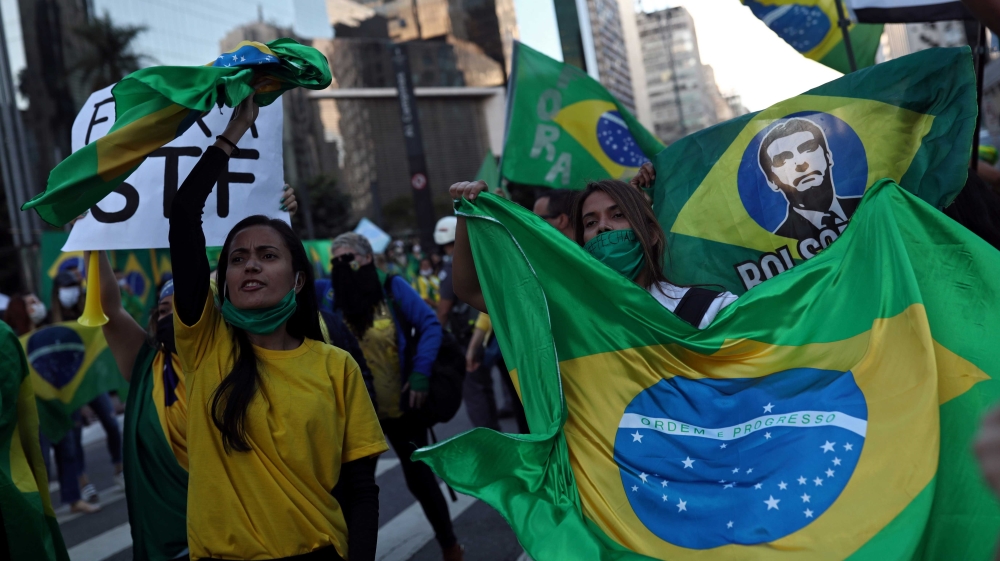 Mandetta, like most health experts, had recommended that social distancing be imposed across the country – a move Bolsonaro fiercely opposed. The president replaced Mandetta with an advocate for reopening the economy, prompting protests by residents who banged on pots and pans out of windows and balconies demanding that Boslonaro resign.

That anger has only been compounded by a major political crisis that escalated at the end of last month.

Bolsonaro’s justice minister, Sergio Moro, resigned in late April, accusing the president of interfering in an investigation and firing the federal police chief for personal and political reasons.

In a scathing 45-minute televised presentation, Moro accused the president of seeking to interfere in investigations that involved two of Bolsonaro’s sons, and had requested access to intelligence files. Moro also said that Bolsonaro had pressed him to replace the chief of the federal police with someone who would be a “personal contact” of the president. The comments triggered calls to impeach Bolsonaro – a move supported by nearly half of Brazilians, according to the most recent Datafolha survey.

Bolsonaro denied Moro’s accusations and said he had the authority to replace federal police officials. But the Supreme Court authorised an investigation into the allegations that Bolsonaro tried to interfere in the work of the country’s federal police force for political motives.

“This is a real moment of crisis for Bolsonaro,” said Anya Prusa, senior associate at the Brazil Institute in the Wilson Center.

“He was already isolated because of widespread disapproval among former political allies and members of the political establishment regarding his response to the coronavirus,” Prusa told Al Jazeera. “When he pushed Sergio Moro to resign, it isolated him even further.”

Once a close ally of Bolsonaro, Moro is a popular figure in Brazil and has won public trust due to his track record on fighting corruption.

Bolsonaro took to Twitter to blast Moro as “Judas”, in reference to the Biblical apostle who betrayed Jesus. 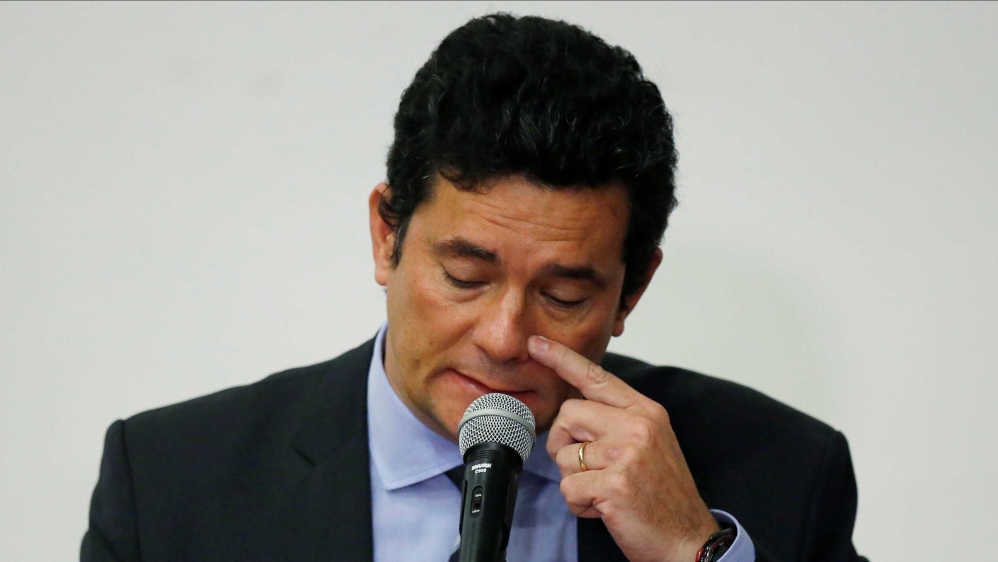 Days later, Bolsonaro tried to appoint Alexandre Ramagem, a family friend who took charge of the president’s security after he was stabbed on the campaign trail in 2018. He has been running the Brazilian Intelligence Agency since July. But Bolsonaro had to withdraw Ramagem’s name, after the Supreme Court blocked the appointment, arguing it would allow him to have inappropriate influence over law enforcement.

Bolsonaro then named and swore in a brief closed-door ceremony Rolando Alexandre Souza, another family friend.

Despite the political crises and outrage over his handling of the coronavirus outbreak, some analysts say Bolsonaro is not under imminent threat of impeachment, though he may be treading a fine line.

“He is not very vulnerable,” said Thiago de Arago, director of strategy at Arko Advice.

“He still has a level of popular support and alliances in the parliament that protect him against impeachment,” de Arago told Al Jazeera. “But this can change, the more he challenges the severity of the virus and the more the virus shows its severity, this will lead him to become further weakened.”

According to a Datafolha survey published on April 28, 38 percent of Brazilians disapprove of the government, while 33 percent said they approved. 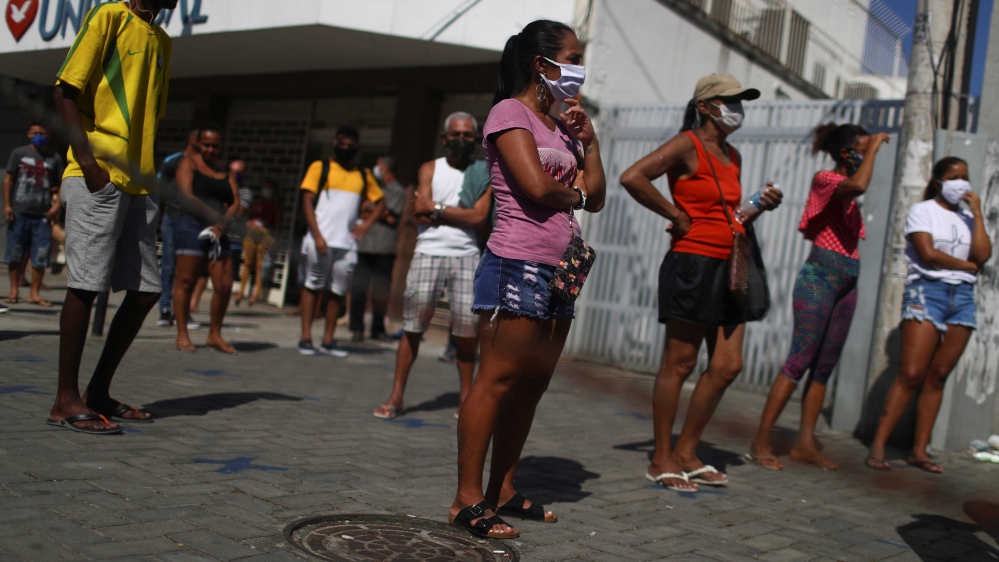 An indictment of the president would have to be approved by the lower house of Congress before a trial could move ahead to the Supreme Court. The House, however, is dominated by Bolsonaro’s allies and is unlikely to approve an indictment.

“Nothing has coalesced enough to make impeachment an immediate threat,” said Jessica Rich, assistant professor at Department of Political Science Marquette University. “Everything is in flux, he has lost a lot of support and has a lot of enemies.”

Others warn, however, it may only be a matter of time before Brazil witnesses a real turning point, one where more lives and Bolsonaro’s leadership may be at stake.

“It is a situation that is still unfolding, so we don’t entirely know where it is going to go, but it is clear that this is going to be a disaster for Brazil,” the Wilson Center’s Prusa said.

Tags: BRAZIL, Jair Bolsonaro, Latin
You may also like
Recent News:
This website uses cookies to improve your user experience and to provide you with advertisements that are relevant to your interests. By continuing to browse the site you are agreeing to our use of cookies.Ok