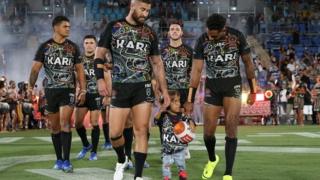 An Australian boy who was bullied for his dwarfism has launched legal action against a newspaper columnist after she alleged he had faked his distress in a video which went viral.

His mother, Yarraka Bayles, said she had posted the clip to raise awareness.

But some – such as Australian columnist Miranda Devine – suggested it was a “scam” over subsequent donations.

Devine and her employer, News Corp Australia, are yet to file a legal defence to the legal action, local media reported.

An online campaign was set up by a US comedian Brad Williams – who had the same dwarfism condition of Achondroplasia – to send Quaden on a trip to Disneyland.

The Bayles later pledged to give all the money to charity, but at the peak of the campaign they were attacked by trolls who claimed the family had staged the incident.

What were Devine’s comments?

Devine – a high-profile columnist for Sydney’s Daily Telegraph – retweeted one conspiracy theory to her 70,000 followers.

She added a comment: “That’s really rotten if this was a scam. Hurts genuine bullying victims. Over to @dailytelegraph.”

She also tweeted that she had shared her initial retweet of the theory with “caution”.

But in subsequent tweets she also alleged that Quaden’s mother had been “coaching the kid to say those things that no nine-year-old would say”.

In the confronting six-minute video that originally went viral, Quaden’s mother describes the relentless bullying experienced by her son every day. The family, who are Aboriginal Australian, live in Queensland.

News Corp Australia previously declined to apologise to the family, saying in March that it bore no responsibility for Devine’s tweets as it was “self-evidently a personal account”.