He dedicated his career to saving the lives of others as a volunteer firefighter and primary care paramedic in Banff National Park, but two-and-a-half years ago, JP Middleton’s journey would pivot forever.

“It’s a feeling of absolute helplessness. You’re lying there and you can’t move your lower body,” the married father-of-two said.

“I was stuck in one position. And you’re now at the hands of the people you were once working with.”

Middleton suffered a spinal cord injury in the winter of 2018 while skiing at Mt. Norquay in Banff National Park.

He had just come from fighting a kitchen fire at a local restaurant and wanted to ski hard. He said he took a cat track too fast and went flying into the air, landing on his rear. He said he knew instantly the daunting fate that lay ahead.

“Terrifying. It was absolutely terrifying.

“When you know what the injuries are right away, you start think about the future before you’re even in the ambulance. You’re thinking of your family, your job, you’re thinking of life going forward.”

He spent months in Calgary’s Foothills hospital trying to navigate his “new body,” his new normal.

On what he calls one of his “darkest days,” while sitting outside the hospital with his dad, Middleton spotted someone riding on something.

“I heard this whizzing sound go past me and I looked up and it was this Mad Max looking vehicle that went by me.

“When I saw this bike, I was like: ‘I gotta get myself one of these things…’ It was a ray of hope for me.”

Middleton found the man on the bike. His name is Christian Bagg.

Bagg had been working at the hospital and building all-terrain accessible bikes in his basement part-time.

Bagg, like Middleton, also suffered a spinal cord injury in Banff National Park, while snowboarding. His injury didn’t stop his desire for the outdoors nor keep up with his friends on mountain bikes. 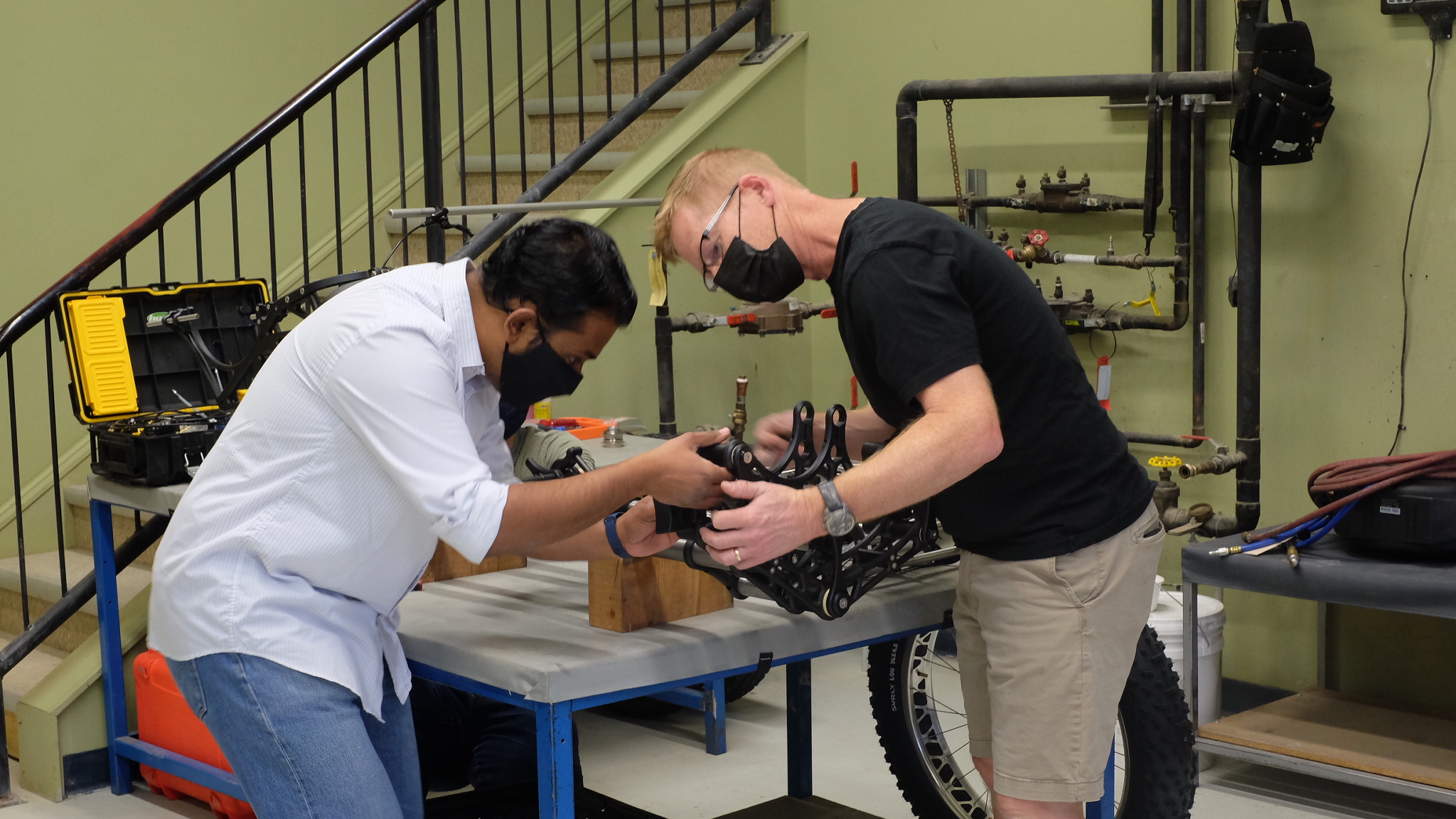 His process began with designing more versatile wheelchairs. Over the past decade, he has created countless models of bikes.

“Some were awful,” Bagg admits, but it led him to what is now called the Bowhead Reach. It’s an all-terrain bike with a big fat rear tire, articulating front end, a harness and an beefy electric motor for keeping up with his able-bodied downhill bike friends. The bike can go pretty much anywhere. 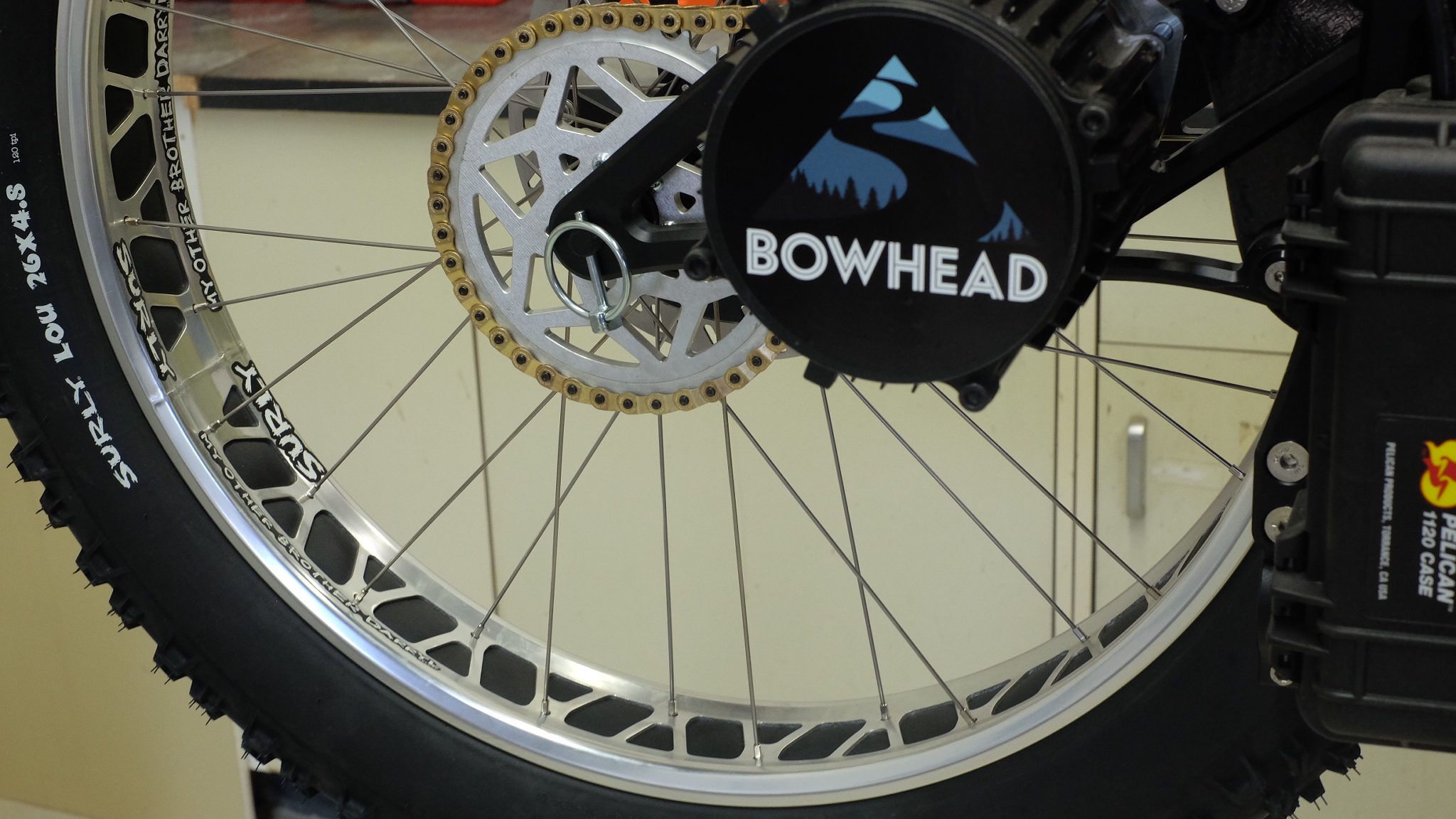 It didn’t take long for Bagg to realize the potential it could bring not only to his life; but so many others.

“People will be doing giant motor cross-sized ramps, or they’ll be going out with their family or they’ll be fishing for the first time in five years. The scope of what people do on it is insane.

“That’s what’s fun to watch the work you do impact people’s lives.”

His customers include children with mobility issues now being able to help out on the family farm, former extreme sports athletes eager to have some of their old life back and even able-bodied people with bad knees or hips.

Bagg and his team built 50 bikes in his basement, but business has been booming and Bowhead — named after the headwaters of the Bow River, where his crash happened — now has a new home in a big shop across from Canada Olympic Park. 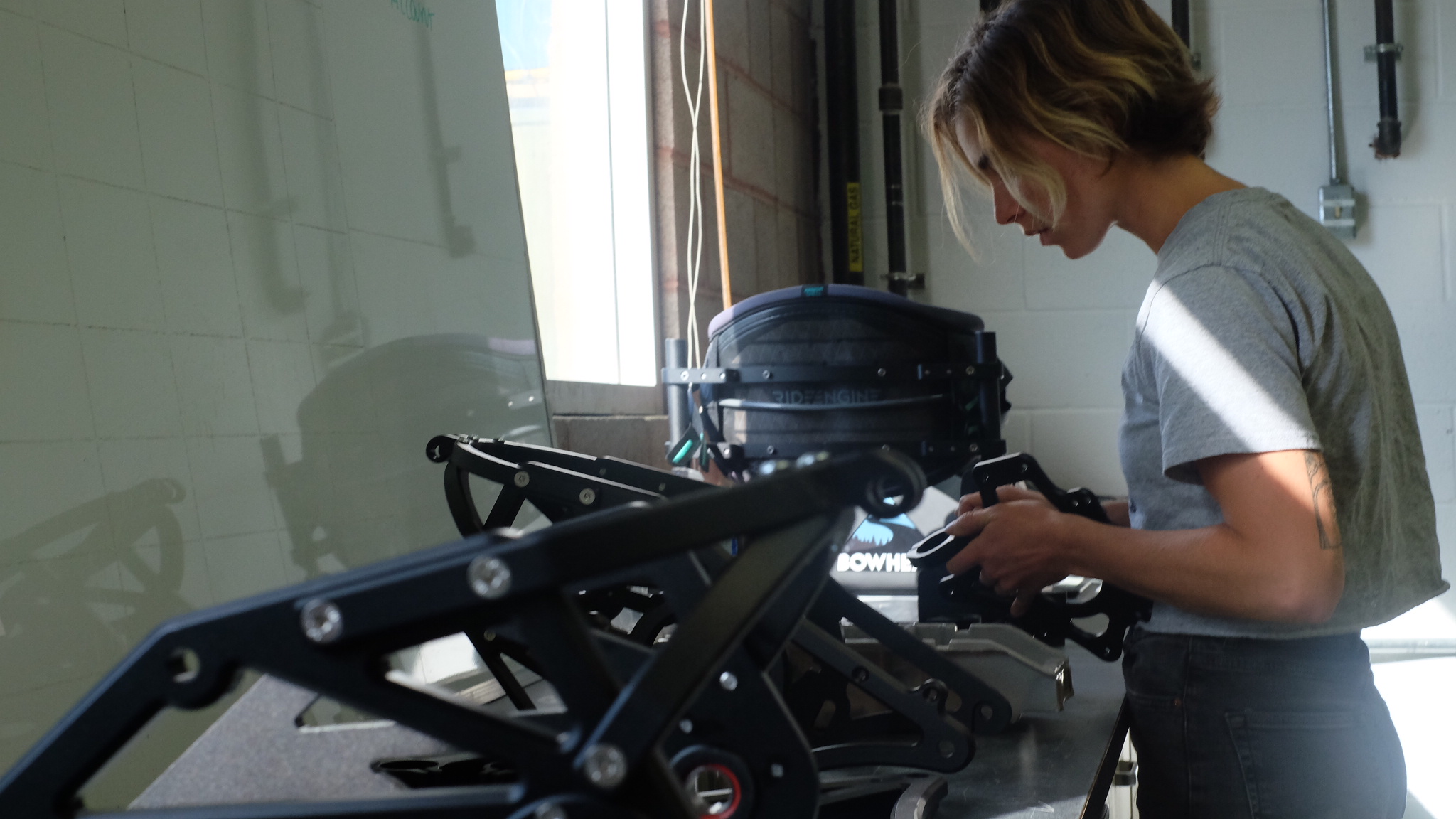 “My goal is to keep this progressing at a blinding pace so disabled people get to have the same rewards that able get to have in their equipment,” Bagg said. 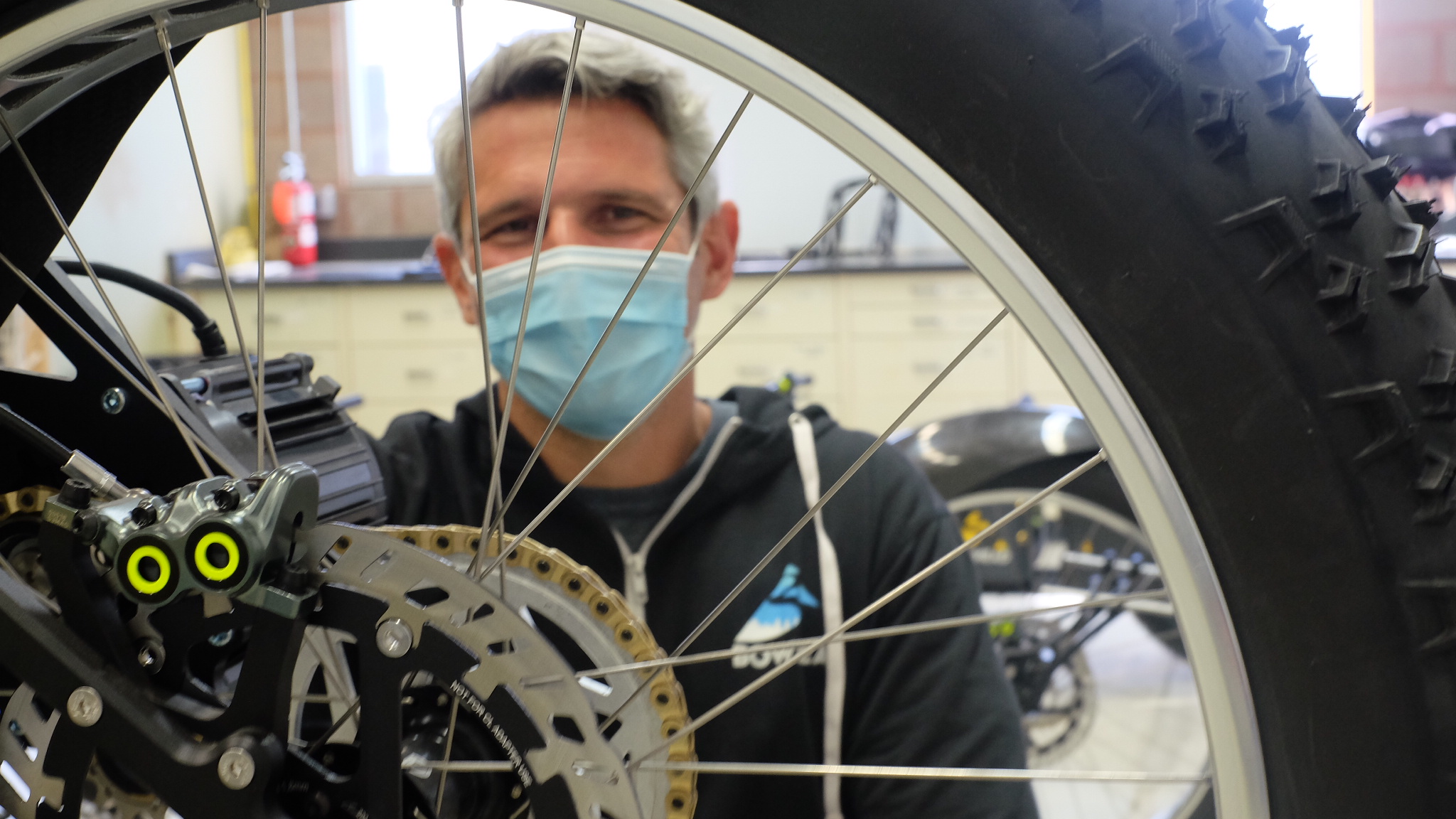 Middleton pretty much ordered a bike from his hospital bed. He credits it for giving him his freedom back.

“It’s become an extension of my body. I take this bike everywhere with me. Camping, I take it in the back-country, I hooked up the trailer and I took it to drop my son off at his first day of school.

“I need this to keep up to my boys,” said Middleton, who is getting used to locals and tourists stopping and staring at his unique wheels.

“This will turn more heads than a Lamborghini going down Banff Avenue.”

But Middleton didn’t just get a bike; he also forged a friendship with someone who had been right where he was.

“He’s taught me to persevere to conquer all your fears and move forward in life,” Middleton said of Bagg. He calls him his “mentor” and his “hero.”

The two men and their families have grown close, sharing an equal love for sport and the outdoors — proving there is more than one way to tackle a mountain.

Middleton has the third bike ever made. Bowhead currently has orders for 200 with more coming in every week. 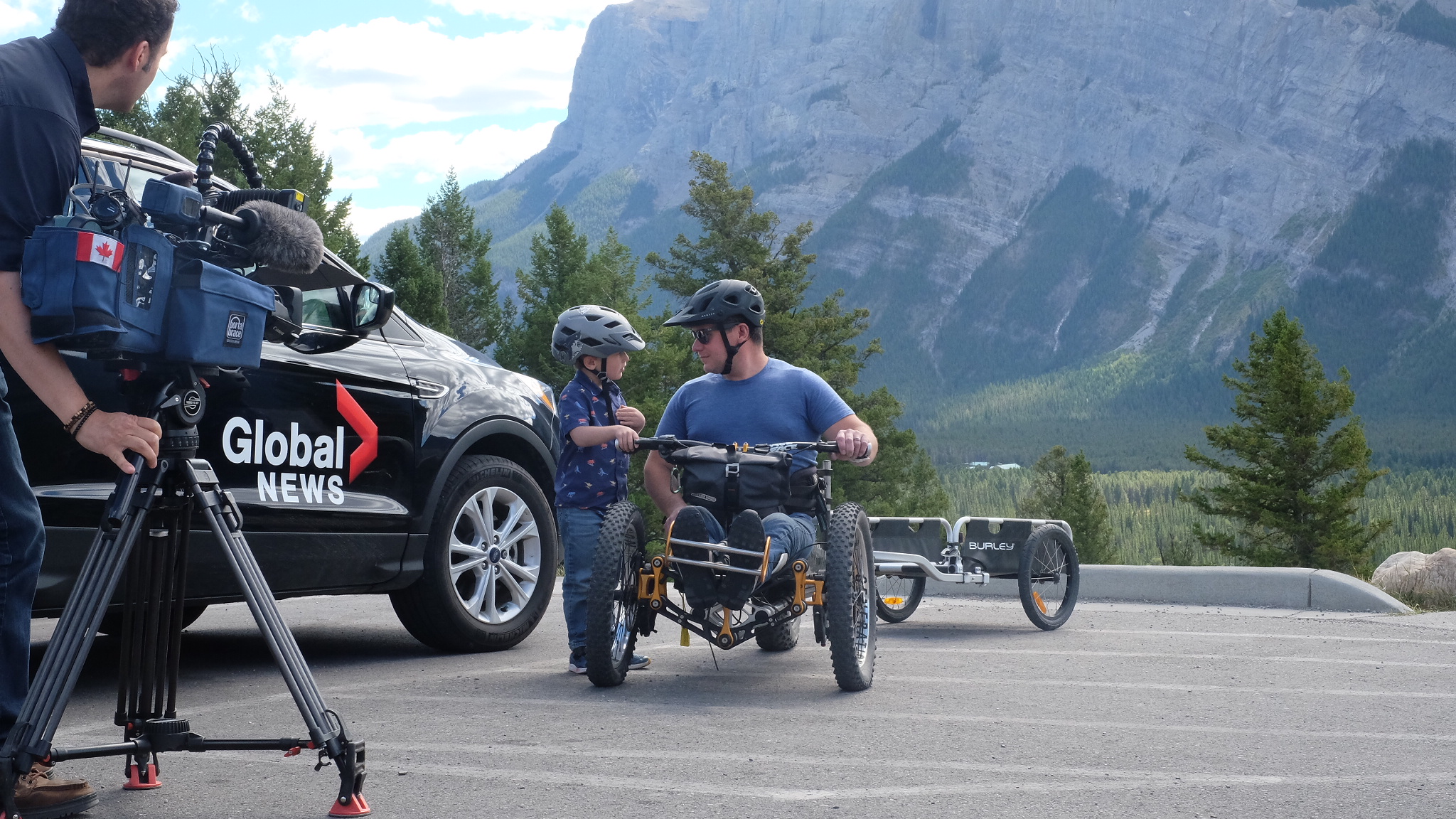 Tags: accessible bike, Banff firefig
You may also like
Recent News:
This website uses cookies to improve your user experience and to provide you with advertisements that are relevant to your interests. By continuing to browse the site you are agreeing to our use of cookies.Ok