The 2020 vintage was already difficult in Napa Valley. It was born in a drought, matured through terrible heat spikes and had endured smoky conditions from the haze of numerous Northern California fires.

Then, on the last weekend of September — in the middle of harvest — savage wildfires seemed to attack the northern end of the valley from all directions.

The Glass Fire started in the early morning of Sept. 27 in Deer Park, east of St. Helena, near the Silverado Trail, the north-south artery of the eastern valley. It swept east, destroying the winery and barrel warehouse at Burgess Cellars and leveling the turreted stone building at Chateau Boswell. It engulfed the three-Michelin-star restaurant at the Meadowood luxury resort and licked the edges of vineyards at Viader and Failla.

It had begun climbing the hills on the east side of the valley when the wind shifted, blowing the fire back west.

In the Spring Mountain District on the west side of the valley, windblown embers from the Glass Fire ignited another blaze, while a fire in Sonoma County to the west swept in over the hills, consuming the winery at Cain Vineyard and Winery, along with three houses and all the wine in the 2019 and 2020 vintages. 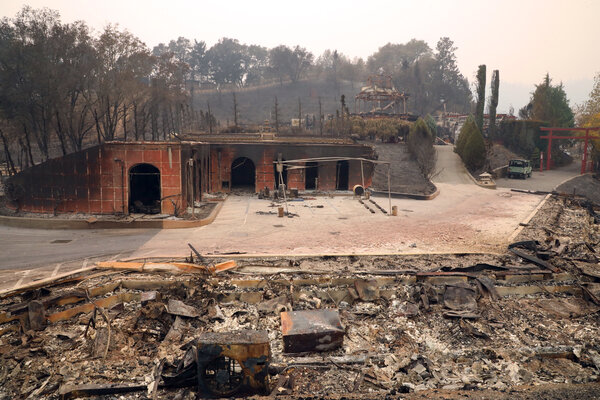 Newton was gravely damaged, losing its signature pagoda building, which had just been completely rebuilt, its terraced estate vineyard and a lot of wine. A large warehouse and winery area at Castello di Amorosa were destroyed, and at least 10,000 cases of wine were ruined.

But after several days of touch and go, on Monday morning, the fires seemed less immediately threatening as the winds shifted, said Frank Dotzler, the general manager at Outpost Wines, on Howell Mountain.

“From south St. Helena to north of Calistoga, the hillside is completely charred,” said Mr. Dotzler, speaking of the eastern side of Napa Valley. “A drive through the valley now, it’s just unimaginable.”

Grape vines are often able to withstand fire damage during growing season. Moist and green, they act as firebreaks. But dried cover crops like legumes, planted between the rows, can catch fire, as can infrastructure like rubber irrigation hoses and drainage equipment, which seems to have been the case at Newton.

The damage to wineries cannot be tallied simply by adding up the cost to rebuild. It goes much deeper than that.

For many consumers, a bottle of wine is just a product on a shelf, acquired in a transaction, consumed and forgotten. For the producers of good wine, however, a bottle is deeply imbued with emotional as well as economic meaning.

The wine itself is the product of vineyards, living entities that have been nurtured from cuttings, sustained and protected through natural threats and maladies until, finally, the grapes are harvested. The French word for fermenting and aging the wine is élevage, which means raising or rearing, as you would a child.

What’s bottled is not just a beverage, but a legacy of the people who grew the grapes and made the wine, a snapshot of their thoughts, their emotions and their labor as they seek to convey the character and personality of a place through the wine.

To lose a vintage, much less a vineyard, is devastating.

“It was such an uphill battle, but we made it,” said Jean-Baptiste Rivail, Newton’s general manager, speaking of the arduous 2020 vintage.

While the entire crop had not been picked, much of the wine had been fermented and put into vats and barrels at Newton’s newly constructed winemaking facility.

When Mr. Rivail and his team, who had been evacuated, were finally able to return to Newton to inspect the site, they were greeted by streams of wine flowing downhill.

“Every drop of wine was like a miracle this year, the viticulture was so hard,” he said. “It’s almost like losing a living thing. And it’s violent, to go back on site to find ashes and gutters full of wine.”

Christopher Howell, the general manager and wine grower at Cain, not only lost the winery and the ’19 and ’20 vintages, but he and his wife, Katie Lazar, also lost their house. He took a philosophical view of the fires.

In the immediate aftermath of the fire, Mr. Howell was already looking ahead. Two vintages may have been lost, but three others, from 2016, ’17 and ’18, were safely in storage in a facility in the southern part of the valley.

“It’s painful, but we didn’t lose anybody, and we have many of the things we need to keep going,” he said. “The people of Cain are at the top of the list. We’re gathering to talk and to think through the next steps. We have to get in there and care for the vines, and we have wines to sell.

“There’s more to Cain than simply a building.”

As September turned to October, there was no end to the threat. On Spring and Diamond Mountains on the west side of Napa Valley, and on Howell Mountain and Pritchard Hill on the east, winemakers who had not been evacuated were holed up with generators, agricultural water sprayers, earth-moving equipment and whatever other tools they could muster in an effort to defend their properties.

The brothers Stuart and Charles Smith founded Smith-Madrone on Spring Mountain in 1971, and, Stuart Smith said, have for decades feared devastating fires like these.

Over the course of the week, the brothers, along with Stuart’s sons, Sam and Tom, hunkered down at the property. In vulnerable places around the property, they staged buckets and bins full of water ready to douse fires. They hosed down structures and moved equipment into the vineyard, where it had the best chance of protection.

“We basically just prepared for a fight,” Stuart Smith said.

The fire approached the property several times from different directions, but working with their neighbors and firefighters they were able to confine it to the edges of the property, losing no more than a few water lines and some water filtering equipment.

In some cases the professionals took over. Mr. Dotzler of Outpost said the situation there had deteriorated Wednesday night as fires intensified. He had been evacuated on Sept. 27, but was able to visit the property several times.

“There are fire engines up there ready to defend it,” he said. “It’s in the hands of the firefighters.”

As the fire approached, the firefighters bulldozed through fields and woods, trying to divert the blaze by depriving it of its fuel.

“It was coming west to east, and then it went around the corner and tried to get us from the north,” Mr. Dotzler said. It got within 100 meters of Outpost, he said, before winds shifted and the fire receded.

“I attribute this to the firefighters doing a great job,” he said.

Mr. Dotzler is also an owner, with the winemaker Thomas Rivers Brown, of Mending Wall Winery, on the Silverado Trail in St. Helena. When the Glass Fire started, Mending Wall was right in its path. It burned right up to the parking lot on the first night before diverting, Mr. Dotzler said.

Even before the latest round of fires, the pervasive smoke that hung over wine country in September had taken its toll. For the first time since 1978, Chateau Montelena, a historic producer near Calistoga, will not make an estate cabernet sauvignon because the grapes were tainted by ash and smoke.

At Kamen Estate, across the Mayacamas Mountains in neighboring Sonoma County, the proprietor, Robert Mark Kamen, has concluded he will most likely not make any red wines in 2020 because of smoke taint, which can make a wine taste disagreeably smoky, or worse, like ashes.

“To say I’m bummed is an understatement,” he said. He has already sold off some wine that might eventually have fetched $100 a bottle for $5 a gallon, to huge producers who will use it as a minuscule, undetectable part in the vast tanks of wine they will bottle and sell cheap.

For Mr. Kamen — a screenwriter with movies like the “Taken” series, the “Transporter” series and “The Karate Kid” on his résumé — the last month or so, with the intense heat and the smoke, has been surreal. Almost all the grapes were picked by Oct. 1, when, in an ordinary year, the harvest would has just begun.

“Every day has looked like a Chinese watercolor, muted and gray,” he said. “The heat combined with the particulate matter in the air made it hotter, and the grapes started freaking out.”

Despite the destruction at Newton, not all was lost. While its Spring Mountain vineyard was destroyed, it also has vineyards in the Carneros region and on Mount Veeder, both to the south.

“So we will make wine in 2021,” Mr. Rivail said. Newton is owned by LVMH, the luxury conglomerate, so it’s not without resources. “We will rebuild, we’ll keep making wine. We’re lucky that everybody was safe.”

Most meaningful of all, Mr. Rivail said, has been the reaction of the community. He has already received invitations from other wineries to use their facilities until Newton is back on its feet.

“It’s great for the team to feel at least we have these options,” he said. “I understand the meaning of being forever grateful.”

Tags: Calis, fires, Grape, Napa CA, Wine
You may also like
Recent News:
This website uses cookies to improve your user experience and to provide you with advertisements that are relevant to your interests. By continuing to browse the site you are agreeing to our use of cookies.Ok