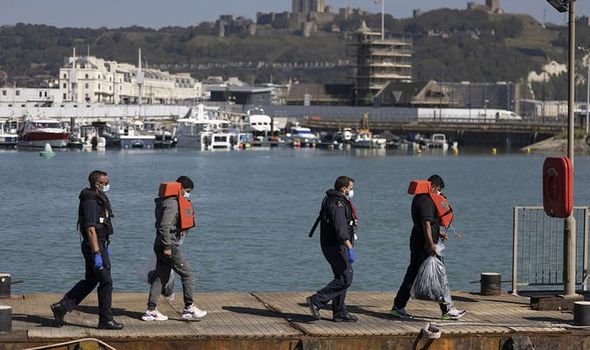 Around 60 percent of asylum seekers using tiny boats to cross the Channel are not in France 24 hours before, it is understood. This suggests co-ordinated smuggling operations are moving migrants through France hours before the crossings.

Most traffickers now choose to store their boats in Germany, but many of the people they prey on are also travelling to the Netherlands and Belgium before being forced on to small dinghies and boats by criminal gangs.

A Government source said: “Germany has become the established hub for criminal gangs and the gang matching that takes place.”

At least 10 migrants have died on the crossing in recent weeks.

Most of the crime gangs are spread out across the routes commonly used from the Middle East to the UK. Migrants pay them around 4,000 euros each to make the journey across the Channel.

Senior officials fear there are not enough French Gendarmerie Nationale or local police patrolling beaches to deal with the gangs.

At the height of the Calais crisis five years ago, some 3,500 officers were deployed there, but there are currently said to be just hundreds – mainly paid for by Britain.

President Emmanuel Macron yesterday accused Britain of swinging “between partnership and provocation” on the issue.

Mr Macron said he realised the presence of asylum seekers is disturbing life in northern France after violence levelled at police intensified recently ‑ with one officer having their ear bitten off, while CS gas was also used to disperse a large migrant group.

Home Secretary Priti Patel said this week: “The real problem on illegal migration flows is the EU has no border protections whatsoever.”