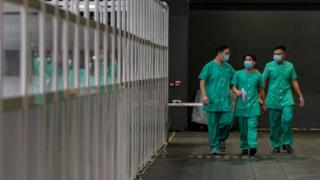 Seven health officials have arrived in Hong Kong from mainland China, the first members of a 60-person team that will carry out Covid-19 testing.

This is the first time Chinese health officials have assisted in Hong Kong and comes as Hong Kong sees a sharp rise in new infections.

But some local councillors raised concerns that China may be collecting DNA samples for surveillance purposes, said Reuters.

Hong Kong’s government has denied this.

Tensions are high between pro-democracy groups in Hong Kong and the Chinese government after Beijing imposed a new national security law in Hong Kong in June which critics say erodes freedoms.

The broad-sweeping law, which was widely criticised internationally, allows for life in prison for those China determines to have engaged in acts of secession, subversion and collusion with foreign forces.

Members of the health team are mostly from public hospitals in southern Guangdong Province, according to Chinese state media the Global Times, and will help with mass testing in the region.

The Global Times said the team was established at the request of the Hong Kong government, at a time where medical resources in Hong Kong are said to be overstretched.

The city reported 115 new cases on Sunday, continuing a streak of infections in the triple digits, and bringing the city’s total tally to 3,511.

The overall numbers are still lower than those of many other places – but the spike comes after Hong Kong appeared to have contained the outbreak, with weeks of few or no local infections.

It’s now experiencing what’s been described as a “third wave” of infections.

Earlier last week, Hong Kong postponed its parliamentary elections, originally due to be held in September, by a year.

The government said it was a necessary move amid the rise in infections but the opposition has accused it of using Covid-19 as a pretext to stop people from voting.