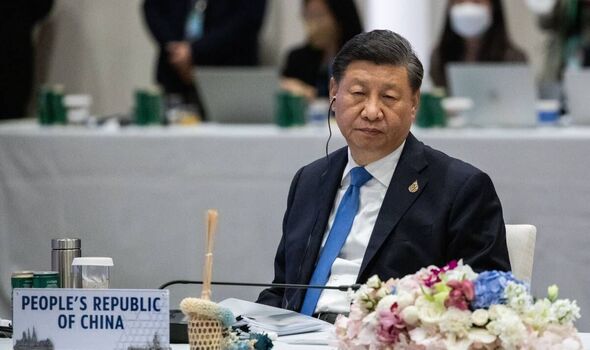 But this weekend’s celebrations will only add to a growing list of woes for President Xi Jinping. His dreams of overtaking the US as the world’s largest economy were dealt a blow last week when official figures showed China’s population is set to fall – 10 years sooner than predicted.

India, meanwhile, will overtake its neighbour to become the world’s most populous country.

New Year festivities usually bring some joy to the nation, as hundreds of millions of people travel back from cities to visit families in China’s rural heartlands in the world’s largest migration event.

But it will be the first time many have been able to share pandemic tales.

China expert Dean Cheng said: “XI had a choice: sustain his zero-Covid policy and lockdown and deny hundreds of millions their only opportunity to see family for the year, or roll the dice and remove Covid restrictions.

“But it is a risky move. People will be able to share stories about events they have experienced over the last year – stories of corruption, of inconsistencies, of being welded into apartment blocks because of Covid rules,

“So far these have been viewed as local problems. But when these experiences are exchanged, they will become a national problem. And that makes them Xi’s problem.”

He added: “Covid is already exploding across China. What happens when people from the cities bring it to their elderly relatives? What happens if the Covid apps each person is forced to have goes red while in transit? “

It comes as dramatic new figures reveal China’s population is set to shrink for the first time in six decades – a full decade sooner than had been predicted.

The figures represent a blow for XI, who is already grappling with a slowing economy and the fall-out from last year’s disastrous zero Covid policy, which turned away foreign investors and sparked widespread protests.

Not only will this make it difficult for China’s beleaguered economy to recover, but it also spells the death-knell for any hope of surpassing the US to become the world’s largest economy, Britain’s leading supply chain expert said last night.

“The days when China was effectively the world’s factory are coming to an end,” warned Oliver Chapman, ceo of supply chain specialists OCI. “I don’t see how it will ever surpass the US now.”

China had 1.41175bn people at the end of 2022 and a birth rate of just 7 per 1,000 people, according to its National Bureau of Statistics. The drop of 850,000 people marks the beginning of a long period of population decline.

But it is good news for India, and democracies seeking a more reliable partner to invest in.

India’s population stands at 1.414bn and will soon overtake that of its neighbour for the first time.

Crucially, it enjoys a much younger population, with a median age of 28 compared with China’s 38, where the rate of pensioners to workers is expected to hit 43 percent by 2050.

Much of China’s problems are the result of self-inflicted wounds. Though its one-child policy was finally ended in 2015, the number of marriages have halved since then and desperate efforts to persuade people to breed – including financial incentives – are failing.

Its latest meagre 3 percent growth figures mark the end of a 30-year Golden era, and youth unemployment runs at 20 percent.

Xi’s tenure has seen the imposition of draconian and nationalistic policies which have reversed economic liberalisation and hampered free enterprise within China’s borders.

Some of China’s wealthiest magnates, including Alibaba founder Jack Ma, have fled following a crackdown on the tech industry.

And Xi’s recent U-turn over his zero-Covid policy is unlikely to restore the faith of foreign investors burned by the disruption it caused.

“China still relies heavily on manufacturing, but many corporations have been forced to hedge their supply chain bets and secure alternatives. They won’t be coming back to China.,” said Chapman last night.

With the number of Covid sufferers now in free-fall, things are unlikely to improve quickly.

Some Western companies which use China for manufacturing have seen delivery timelines increase from three to nine months, as factories continue to experience closures.

“Manufacturing in Vietnam or Mexico may be a bit more expensive, but for the first time this is being mitigated by the fact that delivery rates are much shorter,” he said.

China faces other institutional problems too, he warned.

‘Compare this to India, which has a younger demographic, is more highly invested in the tech industry, still has vast states such as Uttar Pradesh which are vastly underdeveloped, and a geographically shorter supply chain.

“Simply put, India has the scope for growth which China no longer possesses.”

“At the same time, Xi declared war on private enterprise to replace it with what he called common property. Tech companies weren’t allowed to go after large profits and became completely disincentivised.

“Xi’s says he wants dual circulation – focussing on a vibrant domestic economy but remaining open to foreign trade – but he still relies on foreign markets and that’s a problem.”

Though India has a way to go to catch up with China, it has a “golden opportunity”, she said

“There is no denying that India’s demographic fortune- where more than half the population is under the age of 30 – is a golden opportunity. A young population with significant purchasing power will make the Indian market more attractive to foreign investors.

“It will also boost India’s position as a destination with an attractive labour force for manufacturers.”