Country’s largest organisation of lawyers, activists vow to question constitutionality of some provisions of the bill. 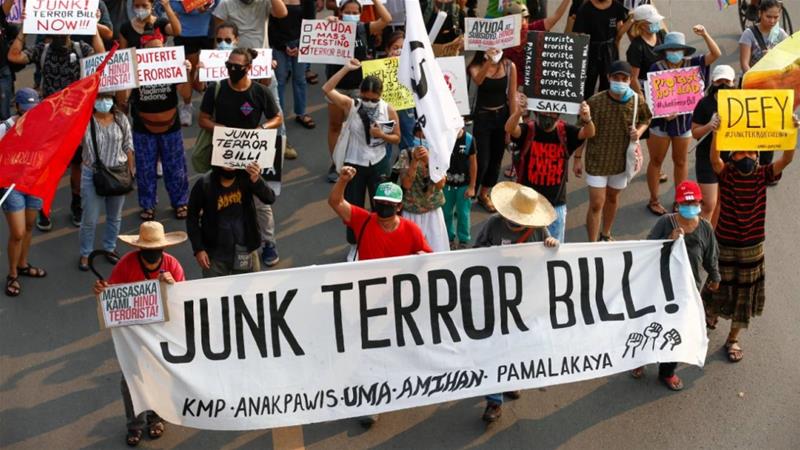 The Philippine Congress has sent controversial anti-terrorism legislation to President Rodrigo Duterte, paving the way for him to sign it into law, while also setting the stage for opponents to mount an immediate legal challenge on the constitutionality of some of its provisions before the Supreme Court.

Senate President Tito Sotto announced that he and House Speaker Alan Peter Cayetano signed the bill on Monday night, and that the document had been received by the office of the president on Tuesday.

Last week, Duterte certified the passage of the legislation as urgent, and he is expected to sign it into law amid growing opposition and decision by several House members to withdraw their support.

The House of Representatives passed the bill on June 4 after it was approved by the Senate in February. Sotto, an ally of Duterte, defended the bill saying only “terrorists” should worry about the legislation.

Duterte’s spokesman said the approved bill would still be subject to review before the president signs it.

On Tuesday morning, opposition Senator Risa Hontiveros, one of the two senators who voted against the bill, hinted at the possibility of joining the effort to take the legislation directly to the country’s highest court, according to a transcript of a media statement that was also provided to Al Jazeera.

“At a time of the pandemic and quarantine, the priority of the government should be food security, transportation, jobs, and safety from infection,” Hontiveros said, adding that a group of lawyers and other civic groups are already preparing for the legal battle.

Former Supreme Court Justice Antonio Carpio had said earlier that as soon as Duterte signs the legislation into law, it can be questioned directly before the high court. Al Jazeera’s sources also said lawyers are waiting for Duterte’s signature before filing their legal challenge.

During an online forum on Monday night covered by Al Jazeera, Senator Francis Pangilinan, the other opponent of the bill, said “there are serious constitutional questions” that it raises, “particularly on the respect for fundamental rights” of Filipino citizens.

The most contentious provisions include those for warrantless arrest and the 14-day detention of suspected “terrorists”, extendible for another 10 days.

According to the legislation, a warrantless arrest can be ordered by the so-called anti-terror council, under the president, meaning the council could be tasked to determine what constitutes terrorism – a role exclusively reserved for the courts as defined in the Constitution.

Those accused of proposing, inciting, conspiring, and participating in the planning, training, and facilitation of a “terrorist attack” could also face life imprisonment without the possibility of parole, as per the bill.

The new legislation includes a provision allowing up to 12 years of imprisonment for any person who “joins” designated “terrorist organisations or group(s)”.

Those provisions of the would-be law violate the bill of rights of citizens enshrined under the Constitution, Senator Pangilinan said, warning that the “broad definition” of “terrorism” could be misused.

“Under the current authoritarian bent, this will be open to abuse. In the context of what is happening in the country today…clearly, the direction is more towards repression,” he said. 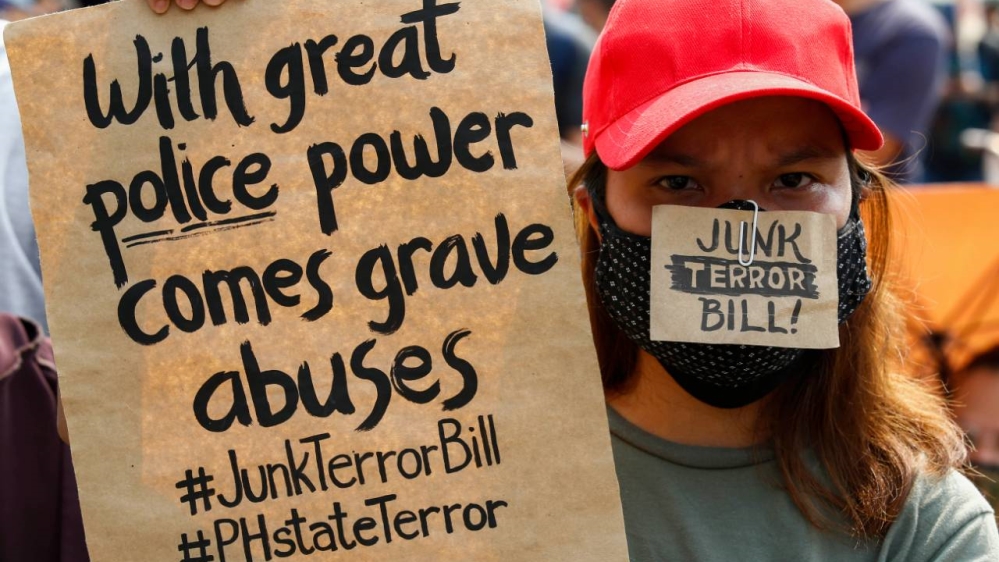 In a statement obtained by Al Jazeera on Tuesday, the Integrated Bar of the Philippines (IBP), the country’s most influential organisation of lawyers, urged Duterte to review the bill as it called attention to some “constitutionally questionable provisions”.

The group said it “will exhaust all avenues” to keep the anti-terrorism bill “within the bounds of our Constitution.”

IBP President Domingo Cayosa said earlier that if the bill is signed in its current form by Duterte, the IBP will challenge it in the top court.

Lawyer Shidik T Abantas of Mindanao State University College of Law in Marawi also questioned the power of the anti-terror council to order the arrest of suspected “terrorists”, saying that can only be done by a competent court.

He cited as an example the arrest orders issued during the siege of Marawi by the defence chief.

“Hundreds of innocent personalities were included. They were arrested and was later on released (after a month or more) for lack of evidence,” he told Al Jazeera, adding that the practice of “planting of evidence is rampant in the police force” making the council “even more dangerous.”

On social media, several groups and individuals expressed their opposition, with many posting the hashtag #JunkTerrorBillNow, while accusing leaders of Congress of rushing the bill.

“We are calling everybody to publicly state their dissent over this outright disrespect to our so-called democracy,” activist group Anakbayan said in a statement.

The University of the Philippines Programme on Alternative Development added that the legislation is “nothing but a weapon to silence criticism and dissent toward the government”.

Tags: PHILIPPINES, Rodrigo Duterte
You may also like
Recent News:
This website uses cookies to improve your user experience and to provide you with advertisements that are relevant to your interests. By continuing to browse the site you are agreeing to our use of cookies.Ok