Israel becomes one of the few countries to impose a second nationwide lockdown. In the U.S., Joe Biden tries to focus the campaign on President Trump’s virus performance.

Bruno Le Maire, the French finance minister, announced that he had tested positive for the virus, writing on Twitter that he had no symptoms but would work in isolation at home for seven days.

Here’s what you need to know: 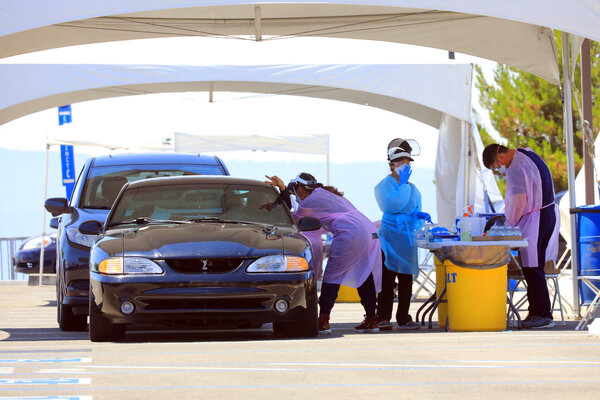 The C.D.C. reverses its guidance on testing for people who were exposed to the virus and aren’t showing symptoms.

The Centers for Disease Control and Prevention on Friday reversed a recommendation suggesting that people who have had close contact with a person infected with the coronavirus do not need to get tested if they have no symptoms.

The agency’s move comes after widespread criticism of the guideline, as well as reporting from The New York Times indicating that the recommendation came from political appointees in the Trump administration and skipped the agency’s usual rigorous scientific review.

The Times reported Thursday that the guideline was posted on the C.D.C. website despite strenuous objections from its scientists.

The previous phrasing, which suggested asymptomatic people who have had close contact with an infected individual “do not necessarily need a test,” now clearly instructs them: “You need a test.”

Experts welcomed the change as consistent with research showing that people without symptoms can spread the virus to others.

“It’s good to see science and evidence taking a front seat for a change,” said Scott Becker, chief executive of the Association of Public Health Laboratories.

And Dr. Ashish Jha, dean of the School of Public Health at Brown University, said, “I’m thrilled to see it, it clearly needed to be done.”

The original guidance, posted on Aug. 24, drew sharp criticism even from the C.D.C.’s partners, including the Infectious Diseases Society of America, which urged its members to continue testing people without symptoms.

In a statement Friday, Dr. Thomas File, the organization’s president, said “the return to a science-based based approach to testing guidance from the Centers for Disease Control and Prevention is good news for public health.”

Tags: Coronavirus;COVID-19
You may also like
Recent News:
This website uses cookies to improve your user experience and to provide you with advertisements that are relevant to your interests. By continuing to browse the site you are agreeing to our use of cookies.Ok