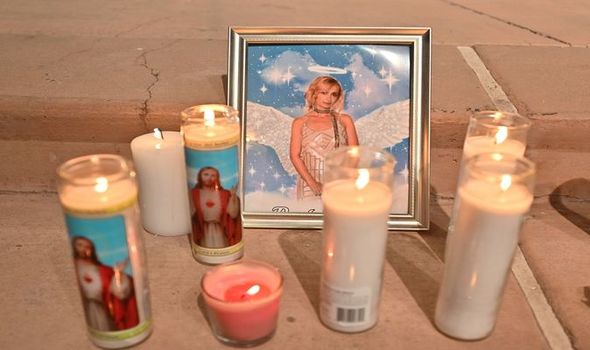 Joel Souza was hit in his shoulder by the bullet that killed Halyna Hutchins on the set of the Rust. He has recalled in an affidavit how he stumbled backwards after hearing the distinctive “whip and a loud pop” of a gun going off. Court documents also paint a picture of a feuding set, where five crew members walked out last week, just hours before the death at Bonanza Creek Ranch in New Mexico, US. They were unhappy with pay and conditions, it was said.

Director Souza, who was filming the western Rust with Baldwin, told investigators how the actor was sitting on a wooden church pew when Halyna, 42, was shot dead.

According to court documents, the star was practising a scene where he would “cross draw” a revolver from its holster, when the gun went off. Souza, 48, told authorities the cast and crew had taken a lunch break and, when they returned, he was not sure if the firearm had been rechecked for safety.

The court papers state: “Joel advised they returned back to the set after lunch, although he is not sure if the firearm eturned e eg was checked again. Joel stated they had Alec sitting in a pew in a church building setting, and he was practising a cross draw.

“Joel said he was looking over the shoulder of Halyna when he heard what sounded like a whip and then a loud pop.”

The director said he vaguely remembers Halyna’s reaction. She was “complaining about her stomach and grabbing her midsection”, it was said.

The papers said: “Joel said Halyna began to stumble backwards, and she was assisted to th ex was the ground. Joel explained that he was bleeding from his shoulder, and he could see blood on Halyna.”

The cameras were not rolling at the time. Moments before the accident, the actor was assured he was handling a “cold gun”, Souza told investigators. A cold gun is one not loaded with live ammunition.

Souza said the film’s armourer, Hannah Gutierrez-Reed, checked prop weapons, and the assistant director, Dave Halls, rechecked them and handed them to the actors.

It was Halls who gave Baldwin the gun, police said. Cameraman Reid Russell, who was standing next to Halyna, gave evidence saying the bullet hit her in the stomach, causing her to fall backwards.

He said she complained that she could not feel her legs. He told investigators Baldwin had always been careful with weapons on set and none of the death was captured on camera because the cast and crew were preparing for the scene.

He also said he was unsure if the gun had been checked because he had left the area for five minutes for a break. The papers said: “Reid said Alec had been very careful, and brought up an instance when a scene was being filmed earlier.

“Reid said Alec had made sure it was safe and that a child wasn’t near him when they were discharging a firearm during that scene.”

A visibly distraught Baldwin, 63, was pictured on Saturday outside a hotel in nearby Santa Fe, embracing and talking with Matt Hutchins, Halyna’s husband, and the couple’s nine-year-old son.

Mourners held candles in Halyna’s honour while watching a slideshow of the cinematographer during a moving vigil at the weekend.

The International Cinematographers Guild held another ceremony for Halyna in nearby Albuquerque on Saturday. In a statement read to a vigil on Saturday, Mr Hutchins called his wife’s death “an enormous loss”. No one has been charged as the sheriff’s office continues its investigation.

Yesterday, Baldwin’s wife Hilaria broke her silence over the death. She said: “There are no words because it’s impossible to express the shock and heartache. My heart is with Halyna. Her husband. Her son. Their family and loved ones. And my Alec.”

Tags: celebrities, entertainment, movi
You may also like
Recent News: