Mr Rumsfeld served from 2001 to 2006 under George W Bush during the Iraq war. According to a statement, he passed away “surrounded by family in his beloved Taos, New Mexico”.

The statement read: “History may remember him for his extraordinary accomplishments over six decades of public service, but for those who knew him best and whose lives were forever changed as a result, we will remember his unwavering love for his wife Joyce, his family and friends, and the integrity he brought to a life dedicated to country.”

He wrote: “In a busy and purposeful life, Don Rumsfeld was a Naval officer, a member of Congress, a distinguished cabinet official in several administrations, a respected business leader – and, with his beloved wife, the co-founder of a charitable foundation. 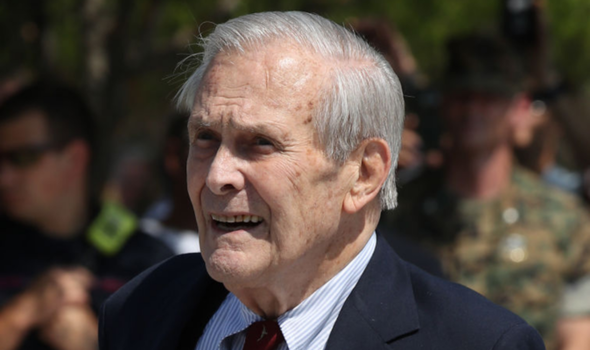 “Later in life, he even became an app developer.

“All his life, he was good-humoured and big-hearted, and he treasured his family above all else.”

The 43rd President also sent Mr Rumsfeld’s family a condolence message on behalf of himself and his wife.

Mr Bush added: “Laura and I are very sorry to learn of Don’s passing, and we send our deepest sympathy to Joyce and their children. 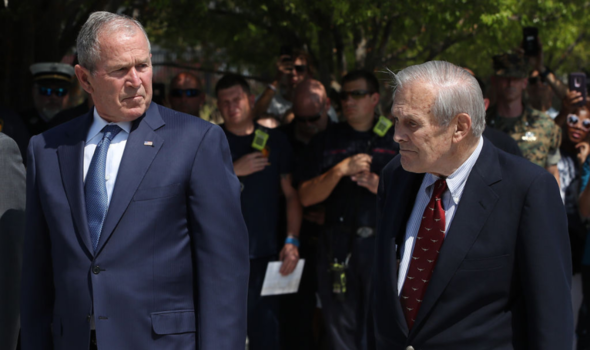 “We mourn an exemplary public servant and a very good man.”

Mr Rumsfeld’s death came just days before what would have been his 89th birthday on July 9.

He also served under President Richard Nixon as director of the Office of Economic Opportunity in 1969.

Mr Rumsfeld was the White House chief of staff for President Gerald R Ford before being nominated as the 13th defence secretary in 1975 until 1977.