U.S. President Donald Trump was welcomed to the Supreme Court on Thursday with loud boos and chants of “Vote him out,” during a rare public appearance to pay his respects to Ruth Bader Ginsburg, the late justice whom he is rushing to replace.

Ginsburg, 87, died last week after serving 27 years on the nation’s top court. She laid in repose at the Supreme Court on Thursday and is scheduled to lie in state at the State Capitol on Friday, making her the first woman ever honoured in such a way. The liberal justice, whose fans call her the “Notorious RBG,” was the second woman ever appointed to the Supreme Court.

Trump and his wife, Melania, briefly showed up to see “RBG” on Thursday morning and did not deliver any remarks.

Videos show the president wore a mask to the event — something he’s only done a handful of times in public. 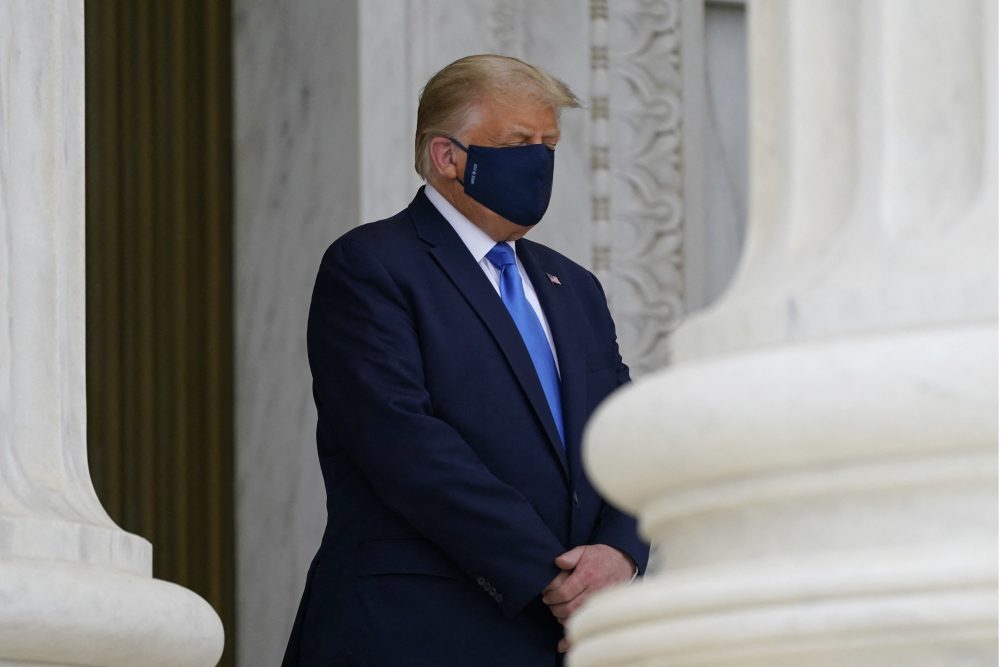 Mourners turned on Trump immediately, serenading him with boos before breaking out into a chant of “Vote him out!”

It was a rare moment of exposure for Trump, who typically only appears before curated crowds of his supporters and tends to avoid his critics in public.

Last June, for example, he waited for National Guard troops to tear-gas and disperse a peaceful protest outside the White House before venturing out for a photo op in front of a church.

Trump was also booed at the World Series last year.

The president and his Republican allies say they will move quickly to replace Ginsburg the Supreme Court, despite claiming in 2016 that it was not right for Barack Obama to appoint a new justice in an election year.

“The American people should have a voice in the selection of their next Supreme Court justice,” Senate Majority Leader Mitch McConnell, a Republican, said in February 2016. “Therefore, this vacancy should not be filled until we have a new president.”

McConnell has committed to holding a vote on the next justice in the Republican-held Senate before the election on Nov. 3.

“My most fervent wish is that I will not be replaced until a new president is installed,” Ginsburg said before her death, according to her granddaughter.

“I don’t know that she said that, or was that written out by Adam Schiff and (Chuck) Schumer and (Nancy) Pelosi,” Trump told Fox News. “I would be more inclined to the second, OK? That came out of the wind.”

Trump explicitly said on Wednesday that he expects his appointee to help decide the results of the upcoming election.

“I think this will end up in the Supreme Court, and I think it’s very important that we have nine justices, and I think the system’s going to go very quickly,” Trump said.

The president has railed against mail-in voting for months, claiming without evidence that it will lead to widespread election fraud amid a push to avoid in-person polls during the coronavirus pandemic.

Several polls show his Democratic opponent, Joe Biden, is ahead in the race.

Trump could appear to win the race on Election Night while millions of mail-in ballots remain uncounted, according to an analysis by the Democrat-backed data firm Hawkfish.

The notion of a “red mirage” has sparked concern that Trump will claim victory in Election Night and contest the results if Biden overtakes him after the rest of the ballots are counted.

McConnell sought to assure Americans on Thursday that there “will be an orderly transition of power” following the “November 3rd election.”

Trump refused to commit to respecting the election results on Wednesday.

“We’ll see what happens,” he said.

“Get rid of the ballots and you’ll have a very peaceful — there won’t be a transfer, frankly. There will be a continuation,” he added.

The last contested election battle played out in late 2000, after Republican George W. Bush beat Democrat Al Gore by a razor-thin margin in Florida. Gore demanded a recount and a month-long legal battle over the ballots eventually went before the Supreme Court.

The Supreme Court sided with Bush and Gore conceded the fight.

—With files from The Associated Press

Tags: Donald Trump, Ginsburg, Justic
You may also like
Recent News:
This website uses cookies to improve your user experience and to provide you with advertisements that are relevant to your interests. By continuing to browse the site you are agreeing to our use of cookies.Ok