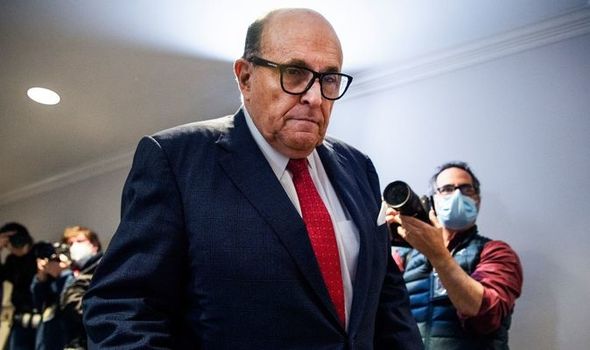 The Republican leader said the former mayor of New York had contracted the “China Virus”. He said his team would continue their legal battles to get the result of the US election overturned while Mr Giuliani recovers. Mr Giuliani has not yet confirmed that he has contracted the virus.

Mr Trump tweeted: “@RudyGiuliani, by far the greatest mayor in the history of NYC, and who has been working tirelessly exposing the most corrupt election (by far!) in the history of the USA, has tested positive for the China Virus.

The tweet from Mr Giuliani’s boss came after the lawyer publicly celebrated after a Michigan judge gave the green light to an investigation into Dominion voting machines.

“This is where the untrustworthy Dominion machine flipped 6000 votes from Trump to Biden.

“Spiking of votes by Dominion happened all over the state.”

This is a breaking news story… More to follow…

Tags: rudy giulini coronavirus, Trump
You may also like
Recent News:
This website uses cookies to improve your user experience and to provide you with advertisements that are relevant to your interests. By continuing to browse the site you are agreeing to our use of cookies.Ok