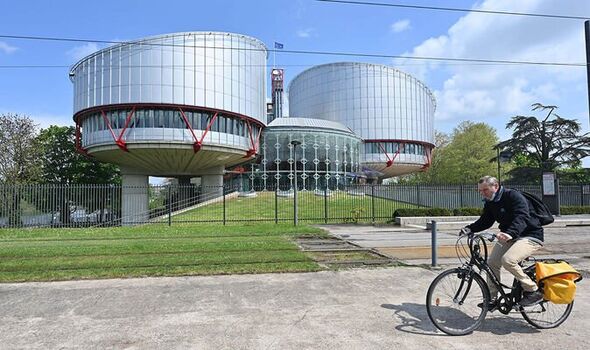 The ECHR has a budget of £65million with judges from the 46 members of the Council of Europe. This is separate from the EU and the UK still belongs. Russia has a representative, Mikhail Lobov, despite being excluded from the Council after the invasion of Ukraine.

Britain’s Tim Eicke was born in Hanover in 1966 and did a law degree in Germany.

He studied Scots and English law at Dundee University.

Mr Lobov, 51, of Chelyabinsk, taught constitutional law at the University of Strasbourg and was appointed to the ECHR on January 2.

Mr Bull – one of 29 Brexit Party MEPs in 2019 and now a presenter on TalkTV – said the ECHR and Rwanda highlighted a glaring anomaly.

He said: “It’s gone through three courts – the High Court, the Court of Appeal, and the Supreme Court of the United Kingdom – and then at the 11th hour is trumped by somebody in Europe. I’m as frustrated as anyone by that.”

“It shows what appalling management of Brexit the Government has achieved.”

“We’re not a tin-pot dictatorship. The UK has a great judicial system and currently, they’re trying to bring in a British Bill of Rights, although if that ever happens I’ll probably be very old.”

“The reason we fought so hard for Brexit was to have the freedom to choose, to take back control of our money, laws and borders. Now the whole thing is a mockery as far as I’m concerned.”