The Indian authorities launched an investigation after an internal government report concluded that some private agencies responsible for coronavirus testing on pilgrims at a sprawling Hindu festival forged at least 100,000 results.

The festival, Kumbh Mela, which ran throughout April, is widely believed to be responsible for a coronavirus surge in many parts of India, as the pilgrims returning from the festival tested positive days after returning to their villages.

The festival drew millions of faithful to the town of Haridwar on the banks of the river Ganges in the northern state of Uttarakhand.

“We have constituted a four-members committee that will submit its report in two weeks,” Dr. Arjun Singh Sengar, a Haridwar health officer who was in charge of testing for Kumbh Mela, said in an interview. “Initial investigations are pointing toward lapses and fake results.”

But health experts questioned those numbers, saying the state government underreported positive cases. That suggested it was safe to take part in the pilgrimage, despite evidence that the largely unmasked crowds provided an ideal environment for the virus to spread.

According to a sprawling government report on the lab that conducted rapid antigen tests during the festival, at least 100,000 test results out of 400,000 were fake.

Despite warnings by public health experts and doctors, the regional government led by Prime Minister Narendra Modi’s party advertised the festival in newspapers, inviting pilgrims from across the country.

Before the event, Uttarakhand’s top elected official, Tirath Singh Rawat, mingled with huge crowds of pilgrims, without a mask. When questioned during one of his three visits to the holy site, Mr. Rawat said, “Faith in God will overcome the fear of the virus.”

He tested positive for the coronavirus two days after his last visit to the Ganges.

Officials in Uttarakhand began investigating the test results after a man in the neighboring state of Punjab received a negative test from the health department in Uttarakhand, even though he had not visited the state. He filed a complaint with the Indian Council of Medical Research, a top government body.

Officials alerted the state government, which is now leading the investigation and has stopped payments to dozens of private laboratories and agencies involved in testing.

Testing scams have been a persistent problem in India.

Some, according to a report by the state, have simply filled log books with fake names and addresses, then charged the state government for the service.

In Haridwar, the report found that some sample collectors listed for the festival had never even visited the town.

The authorities said they found phone numbers used multiple times to register pilgrims who were tested, and private agencies carrying out the tests wrote fictional addresses for people who were supposedly tested on their arrival for a dip in the holy waters.

When officials called the numbers in the logs, they found they were false. 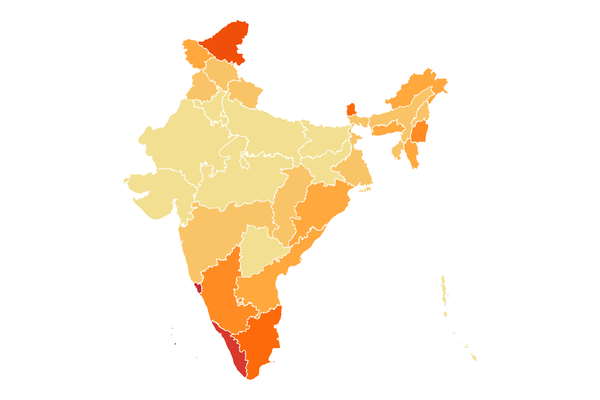 See the latest charts and maps of coronavirus cases, deaths, hospitalizations and vaccinations in India.