Bogus stories and half-baked conspiracy theories are surging through the internet. 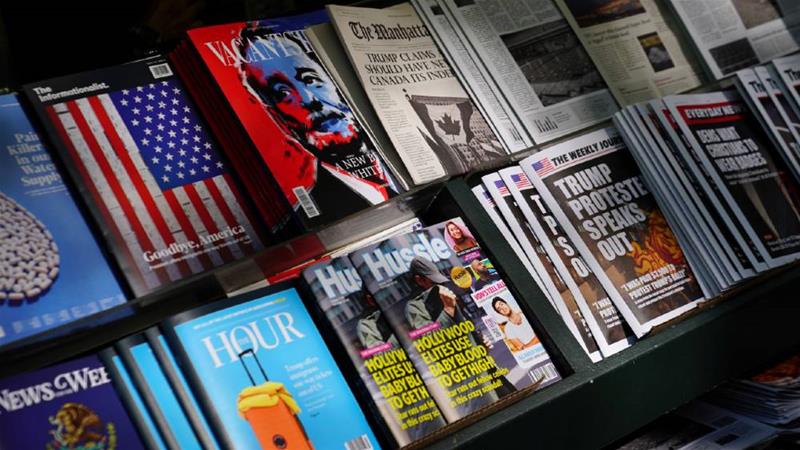 London, United Kingdom – The theories have spread almost as fast as the new coronavirus: Chloroquine is a proven cure, children are immune and 5G caused the pandemic.

From the seemingly plausible to the predictably untrue, fake news about COVID-19, the disease caused by the virus, is flooding the internet as we scramble to make sense of a crisis that has wrought havoc around the world.

Unchecked, this so-called “infodemic” threatens to hamper the world’s collective best efforts to curtail the coronavirus, which has killed more than 115,000 people in a little more than 100 days since news of its emergence in Wuhan, China, consumed the world’s media.

“Were we to view this [pandemic] as a conflict, then we could talk about two fronts,” Carl Miller, research director of the Centre for the Analysis of Social Media at United Kingdom-based think-tank Demos, told Al Jazeera.

“The first is the public health reaction, and the second front are the waves of social and political chaos that have been caused by the virus and our response to it – this is a key battle on that front.”

While millions of us remain cooped up in our homes under strict lockdown laws, on WhatsApp, Facebook, YouTube and elsewhere, a range of bogus stories and half-baked conspiracy theories concerning COVID-19 have gained considerable global momentum.

In the UK alone, nearly half of all adults have been exposed to false claims or misleading information online about the virus, according to research published last week by the country’s media watchdog, Ofcom.

Some 35 percent have seen claims that drinking more water can help flush out the disease, for example, while around a quarter have seen advice suggesting the infection can be treated by gargling salt water – both of which have been rubbished by the World Health Organisation and contradict UK public health guidelines.

Among those to have personally witnessed the pernicious advance of misinformation is Ahmed Aweis, a business owner in London, itself the epicentre of Britain’s coronavirus caseload.

For weeks, he has seen fake news spread freely on WhatsApp and Facebook.

Towards the end of March, Aweis said, up to 25 videos a day spouting mistruths were being shared across a handful of his online groups of friends and relatives – all while COVID-19 tightened its grip on swathes of Western Europe.

Despite his best efforts to rebut the claims, “everybody was just sharing stuff left, right and centre”, he said, including content that purportedly proved coronavirus was man-made, or caused by the rollout of 5G mobile technology.

“It was frightening and infuriating because you know this information is false, but the people who are sharing it have the confidence this will help or save humanity – and other people pick up on that,” Aweis told Al Jazeera.

“I am very, very worried; there is so much misinformation being spouted around.”

Platform to platform, country to country

According to the Ofcom survey, which was based on a weekly poll undertaken by around 2,000 people, some 40 percent of adults in the UK are “finding it hard to know what is true or false about the virus”.

Professional fact-checkers said the widespread confusion partly stemmed from the overwhelming amount of available content online concerning COVID-19, which has had an impact on every continent except Antarctica.

“Every country in the world is talking about this,” Claire Milne, deputy editor at UK-based fact-checking charity Full Fact, told Al Jazeera.

“And so a large number of false claims are starting off in one place and then being translated into lots of different languages, and moving from platform to platform and spreading from country to country.”

Full Fact has so far debunked a slew of incorrect stories and claims, and it expects more to emerge.

Among some of the more notable stories to be disproved were reports shared on Facebook suggesting Russia had unleashed 500 lions to prevent people from going outdoors, and Twitter posts claiming UK Prime Minister Boris Johnson – who recently spent several days in hospital after contracting coronavirus – was dead.

Above all others, Milne said, one particular thread of misinformation had been especially prominent online in recent weeks – the theories linking the pandemic to 5G mobile technology.

But at the beginning of this year, Belgian doctor Kris Van Kerckhoven breathed new life into the claims when he claimed there was a “possible link” between 5G and coronavirus.

Van Kerckhoven’s comments went public in January in an article published online – and later deleted – by a Belgian news website. Within weeks, his words had been seized on by the anti-5G movement, which in turn sent conspiracy theories racing through the internet.

Now, Demos’s Miller said, the scale of the crisis is unlike anything seen before.

Carl Miller, Centre for the Analysis of Social Media

“We are seeing the emergence of the meta conspiracy theory,” he said, citing the “congealing together” of QAnon, a set of right-wing conspiracy theories, and the “9/11 truther”, as well as pre-coronavirus anti-5G movements, among others.

“My very strong sense is that this completely blows anything out of the water that we have seen before, just in terms of sheer volume and virality across social media.” 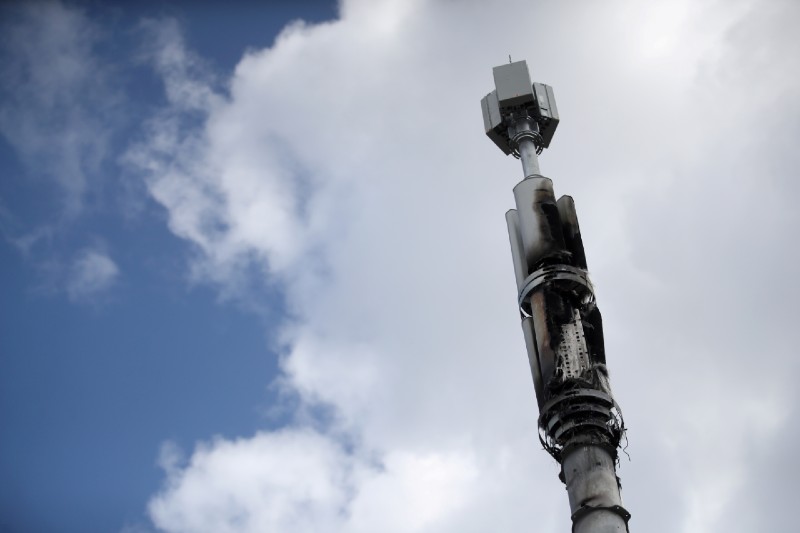 On YouTube, the 10 most popular 5G coronavirus conspiracy videos posted in March were viewed millions of times. Meanwhile, content linking the pandemic to mobile technology continues to spread on Twitter, and Facebook groups – still active today – are filled with misinformation of the same sort.

Milne said Full Fact had identified three broad strands around which the 5G theory appeared to be coalescing; one stating it weakened peoples’ immune systems, another claiming the pandemic had been invented to cover up the health impact of the rollout of the mobile technology, and the third suggesting 5G was accelerating the spread of the virus.

“There’s no evidence for any of these,” she said.

Despite being refuted by scientists as “complete rubbish”, the theories over 5G and coronavirus have been amplified on social media platforms by a string of celebrities including British boxer Amir Khan and US actor Woody Harrelson.

And in an even more worrying turn, the conspiracies have now started spilling out into the real world.

In Britain, where the claims over 5G appear to have particularly resonated, dozens of phone masts and other pieces of critical communications infrastructure have been vandalised since the beginning of April. The Netherlands also reported several instances of cellular broadcasting towers being damaged by arson or sabotage last week.

Meanwhile, footage of UK telecoms engineers – among those designated by the British government as key workers during the coronavirus outbreak – being harassed by members of the public has surfaced online.

“You know when they turn this on it’s going to kill everyone,” an unidentified woman featured in one such clip posted on April 2, and since viewed millions of times on Twitter, can be heard telling technicians laying fibre-optic cables.

“Do you have children, do you have parents?” she asked the pair of workers. “Are they paying you well enough to kill?”

Senior British politicians have meanwhile aimed their scrutiny elsewhere, and called on the tech giants to do more in combating misinformation on their platforms.

Julian Knight, a member of the UK Parliament who leads a committee investigating coronavirus-related online misinformation, recently urged social media companies to play their part and “stamp out deliberate attempts to spread fear about COVID-19”.

“It is right that they are being called to account,” he said in a statement issued on April 6, a week after the UK government announced it was pressing social media firms to crack down on fake news and harmful content online.

A spokesperson for Facebook, which also owns Instagram and WhatsApp, told Al Jazeera the company was taking “aggressive steps to stop misinformation and harmful content from spreading on our platform”.

“This includes false cures, false claims that 5G technology causes the symptoms or contraction of COVID-19 and posts encouraging attacks on 5G masts,” the spokesperson said, adding that Facebook was also focused on promoting “official guidance from local health authorities”.

As for the encrypted messaging service WhatsApp, the spokesperson said moves were being made “to reduce and address virality on the platform” including reducing users’ capacity to forward messages to large numbers of people.

Twitter, which has previously announced taking action against misleading and harmful content about the illness, and YouTube, which has banned all conspiracy theory videos falsely linking coronavirus symptoms to 5G networks, were yet to respond to requests for comment at the time of publication.

But despite these moves, misinformation continues to spread online, raising the spectre of official public health guidance aimed at curbing COVID-19 falling on deaf ears, with possibly fatal consequences.

“They see it as when they’re getting close to the truth, the establishment will react,” he said.

“And the burning of 5G masts is a wake-up call,” he added.

“It very clearly tells us this is not something we can ignore, and I am dreadfully worried that unless we can find some kind of effective response … we will see a breakout into at least some significant public disobedience.”

But Aweis, for his part, thinks the tide can be turned.

Since the end of March, the amount of misinformation spread on his WhatsApp and Facebook groups has dropped sharply. Part of the reason, he thinks, is his refusal to let a falsehood lie.

He knows he won’t win over everyone, but he’s already had some success convincing several friends and relatives not to share bogus claims or to buy into baseless conspiracies – and instead heed potentially life-saving official public health advice.

“My wife always asks me why I waste my time with it, and why on earth I stay in the groups,” Aweis said.

“But I say to her that if I don’t challenge them, I don’t see anybody else doing it,” he added.

Tags: Coronavirus pa, United Kingdom
You may also like
Recent News:
This website uses cookies to improve your user experience and to provide you with advertisements that are relevant to your interests. By continuing to browse the site you are agreeing to our use of cookies.Ok